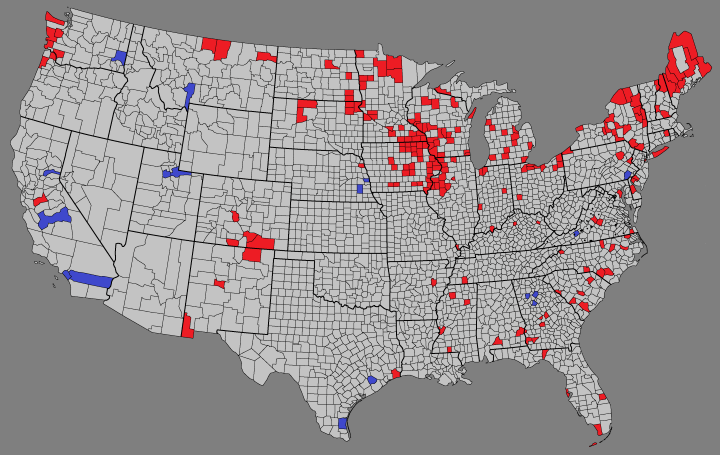 Of course, it doesn’t show vote margin or size of the total vote in each county. The main thing this map shows is the large number of counties in the North East and Midwest that flipped to Trump, after having been Democratic counties in the prior election. The effect was large enough to deliver the normally Democratic leaning states of Iowa, Michigan, Pennsylvania, and Wisconsin into the Republican camp.

Tim Duy has an article about how economists and most politicians get so wrapped up that they miss the human element in economic dislocations. Duy makes the point that they ignore two of the negative impacts of job losses. First, they say how lost jobs free up human capital for use elsewhere in the economy. Of course, as jobs are added to the economy, skill levels and training determine whether laid-off workers are part of that equation.

“High-skilled” workers is what we need, but they are not always the kind of workers that were laid off.

Second, Duy reminds us that most workers have little ability to move to where better jobs might be found. Politicians tell us that the economy is shifting to urban and suburban areas; to higher skilled jobs; that workers must go and get retrained. That misses the point.

Most new jobs for those who were laid off will only be found if workers are able to relocate, to move from rural or devastated urban locations to geographic areas where jobs are expanding. Duy notes it is particularly difficult for rural areas:

The speed of regional labor market adjustment to shocks is agonizingly slow in any area that lacks a critical mass of population…Relative to life spans, in many cases the shocks might as well be permanent.

We don’t have answers for most of these communities. Rural and urban economic re-development is hard. The people living in these regions have experienced job losses (or no jobs growth) for decades; positive jobs growth has occurred elsewhere.

And the laid-off workforce isn’t mobile. In effect, we have limited access to housing in our major cities by pushing housing costs beyond the reach of most middle class workers. This, from Kevin Erdmann:

If you lost your manufacturing job in Buffalo, and you’re thinking of moving to New York City because there are more jobs there, you might decide not to move because it is too expensive. It is the affordability that is keeping you out. But, even here, the affordability problem is just the messenger. It is the rationing mechanism for a housing stock that is relatively fixed for political reasons.

If you decide to move to the NYC area, you see that the housing supply is largely fixed. New buildings are hard to get through zoning. Construction costs in big cities are very high. Income taxes are rising rapidly.

Erdmann makes the point that housing in big cities doesn’t move up with increased demand:

So, it doesn’t matter if Brooklyn apartments rent for $500, or $1,000, or $2,000, or $4,000. There isn’t one for you. Fixing this by fixing affordability isn’t going to change the supply curve. It’s simply substituting non-monetary rationing mechanisms for the monetary one.

Trump’s message that US firms need to consider domestic jobs as much as their bottom line, also resonated with middle and upper-middle class households. OTOH, it’s not like Trump took on the Coal Industry on behalf of workers. He blamed federal environmental policy, but that isn’t what caused the loss of coal industry jobs.

Trump might be running a “jobs” scam, but if it fails, what is the Democrats’ alternative?

We have four years until the next election, two if you are looking at Congress. What policies will work? Will we just trade Trump’s scam for another one peddled by the establishment?

Trump’s promise swung the election. If he fails, what will be the Democrats’ response?