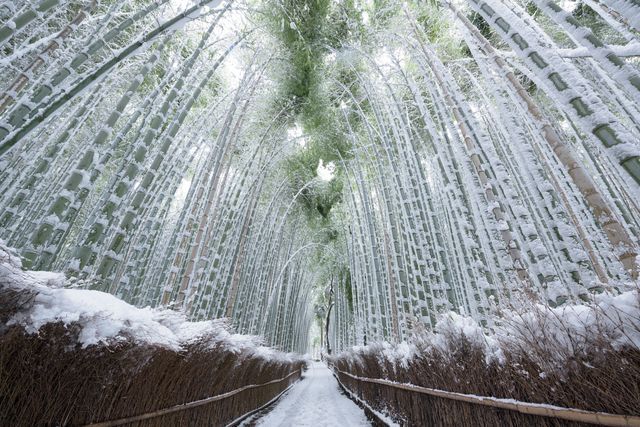 (Bamboo after snowfall in January, near Kyoto. Photo by Hiroki Kondo)

During the 2016 presidential race, Trump campaigned on populist themes. Now that he is in office, it is clear that his policies will be neither populist nor popular, but strictly pro-business. The first clue was his choice of Cabinet members. Despite promising to “drain the swamp”, nobody realized that he could do that by making lobbyists pointless, as their clients are in charge of the government: The CEO of Exxon is head of foreign policy, a former Goldman Sachs partner heads Treasury, the daughter of a ship owner heads Transportation, a corporate raider is at Commerce, and so it goes.

Two months into his presidency, it is clear that the Trump economic policy is pro-business, not pro-jobs, or pro-little guy. If you still have doubt, the Republicans just rolled back a series of Obama-era worker safety regulations. The Senate voted 49-48 to kill a rule that required federal contractors to disclose and correct serious safety violations.

It’s clear that industry CEOs can’t believe their good luck, despite having opposed Trump at every step before the election. He’s only asking them for some vague promises to add new American jobs in return. Acting normal when they are interviewed after leaving a Trump meeting must be the hardest part of their day.

And the total value of US manufacturing in 2015 was $6.2 Trillion and we are doing it with fewer people than ever before. Today, US factories produce twice as much stuff as they did in 1984, but with one-third fewer workers.

Trump’s carrot and stick approach with US companies is theater. He is now industry’s number one value creator: When he commended Ford for deciding not to build a new plant in Mexico, the price of its shares rose 4.5%.

Softbank shares went up 6.2% after being praised by Trump for investing $50 billion in the US. Softbank’s motive was simple: Softbank owns Sprint, who would like to merge with T-Mobile. The authority to permit this merger lies with the new head of the FTC, yet to be named by Trump. Trump’s positive tweets feed Softbank’s hopes that the merger will be approved.

The Trump presidency has begun in the worst possible way for all who believed he would be an activist in new jobs creation for the lightly skilled, the people who overwhelmingly helped to elect him.

If the opposition wants to take Trump down, they should stop talking about Russia, and focus on Trump’s record with jobs creation. He made big promises – a job for everyone. It will be a long time (if ever) before a significant number of new manufacturing jobs materialize. This is true because Trump’s plan is to cut the fat out of government, cutting so many jobs that he might never add enough to make up for those he eliminates.

His plan is to use the freed-up funds to do something splashy with infrastructure. This would allow him to boast significant job creation, while downplaying the lost jobs in government. If Trump can figure out how to take unemployed, 50+ year old white males living in small town West Virginia, and make them productive, employed workers, then he’s a genius.

Capitalism hasn’t changed. A subset of oligarchs led by Trump have seized control of the US government. They are “nationalists”. Another subset, the “globalists” lost control of the state.

OTOH, the American people would have lost regardless of who won.

This is being repeated around the industrialized world, from Brexit, to Marine Le Pen’s right-wing challenge in France, to far right challenges to Angela Merkel in Germany.

The chaos described in Naomi Klein’s Shock Doctrine: The Rise of Disaster Capitalism is engulfing the world.

In honor of those who still believe that Trumpy will solve the jobs equation, here is Alan Jackson with “Hard Hat and a Hammer”: