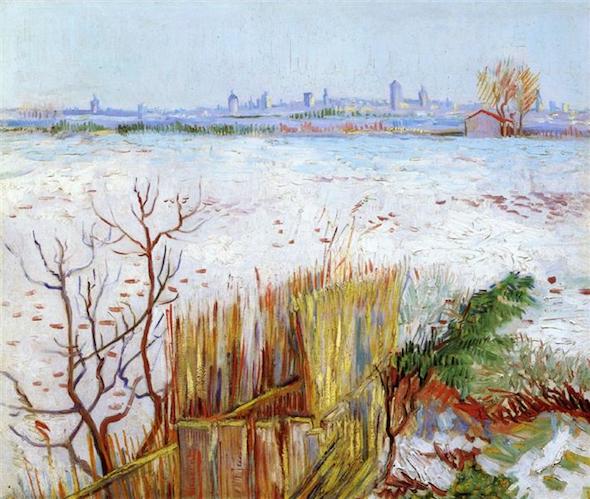 Snowy Landscape with Arles in the background – Vincent Van Gogh, 1888

A tradition at the Mansion of Wrong is to attend the annual New Year’s Day Concert at the First Congregational Church of Washington CT, built in 1801. The concert is always by the New Baroque Soloists. This year, the church was packed, and among the guests were Tia Leoni and Tim Daly, the leads in the CBS series “Madam Secretary”.  For the sixth year in a row, it was another inspiring performance by the New Baroque Soloists.

Now it is time for a few Wrong predictions about 2018, most of which will probably will be wrong:

A “black swan” event (an event that comes as a surprise, has a major effect), could change everything for the President, the country and the world. Let’s hope that none occur in 2018.

Who knows. I believe that the Dems will win the senate. But… would not put money on the table.

I’m not happy predicting that the Dems will come close, but not gain a majority in either house. Hopefully, I’m wrong.

One thing I’ve come to realize is that si-called black swans are increasingly common. Hence I make no predictions nor heed them much. What were deemed to be the odds 18 mos ago that Trump would win? Or that the Dow would be over one third higher? I now think in terms of plausible scenarios. For example: Trump will be out of office before his term is up, and do it in a way that will gain him stature from his fans, blaming Reps and Dems alike. Then he will make the rounds on the lecture (or demagoguery) circuit to standing ovations. He may start the biggest reality show ever (even bigger than now). The bigger the b.s. the bigger the raves. But I look forward to checking your predictions in a in a year! Happy 2018.