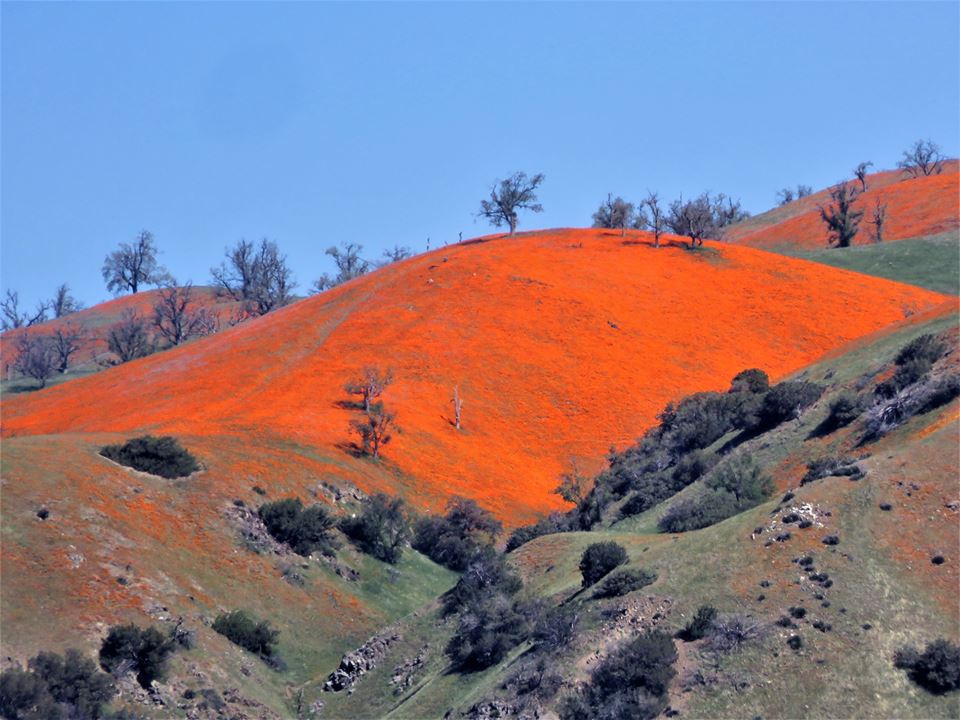 Spring Flowers in the Tejon Pass, as seen from Rt. 5, CA -2018 photo by Dianne Erskine-Hellrigel

On Monday, in a presentation in English, Israel’s Prime Minister Bibi Netanyahu attempted to give Donald Trump high altitude air cover for Trump’s pending decision to end the nuclear agreement with Iran. The basis of Netanyahu’s speech was that Israeli intelligence had gathered new and damaging information about the Iranian nuclear weapons program:

In a special address on Monday, Israeli prime minister Benjamin Netanyahu presented what he described as shocking, indisputable evidence that Iran had lied about its covert nuclear weapons program in the past and “continued to preserve and expand its nuclear weapons knowledge for future use” after signing the 2015 deal with six world powers to halt its nuclear activities.

Bibi presented 55,000 pages of documents and 183 CDs. Netanyahu said Iran hid an “atomic archive” of documents on its nuclear program. Reuters said that:

But if you actually paid attention to the content of Bibi’s presentation two things stood out. First of all, the evidence isn’t so shocking. According to James Acton, the co-director of the Nuclear Policy Program at the Carnegie Endowment of International Peace, “everyone involved in negotiating the JCPOA assumed that Iran was lying when it said that it had never had a nuclear weapons program and the JCPOA was developed on that basis.” He also pointed out that the International Atomic Energy Agency (IAEA) already documented much of what Netanyahu presented.

All Bibi had was old, dated Intel that he presented as new. This was stage-managed so that Trump can announce in 10 days that the US is pulling out of the accord because Iran “lied.”

If you followed the debate about the JCPOA during the Obama administration, you may remember that the 2007 National Intelligence Estimate (NIE) said that any nuclear weapons program Iran had was stopped in 2003, and had not been restarted. That was “re-certified” in the US 2011 NIE, with the same conclusion.

During the development of the 2007 NIE, the Defense Intelligence Agency (DIA) believed all Iran had was a “feasibility study” which was based on the fear that Saddam Hussein might have a nuclear weapons program. But once the US invaded Iraq in 2003, and handed over control of the country to Iran-backed Iraqi political factions, Iran immediately stopped whatever “studies” they had been doing.

A nation’s files about nuclear weapons technology are among the most sensitive documents in their national security archives. They are extremely tightly controlled. Yet, the Israeli story is that they managed to steal 1,000 pounds of files from a Top Secret facility in Iran.

Apparently, unlike Wrongo, Bibi has never moved an office. A thousand pounds would take about 60 “banker’s boxes”. And you would need a truck, or two trips in a car to haul all that away.

From a top-secret Iranian warehouse.

Just try to imagine the actual logistics involved in removing that many documents, and then loading them on a truck. This isn’t a five minute operation.

Leaving the JCPOA may happen on Trump’s watch. He can reinstate US sanctions, but he can’t change UN Security Council resolution 2231. So if Trump reinstates sanctions against Iran, he will not have pulled the plug on the JCPOA accord.

To reinstate UN Security Council sanctions without Russian and Chinese agreement, Trump must state officially that Iran violated resolution 2231. After a formal investigative process, the “rollback” of UN sanctions would come to a vote where five of the eight signatories of the JCPOA would have to agree that Iran violated the deal.

Given that Trump won’t get the Iranian, Russian and Chinese votes, he must get all four European votes. That seems likely to be an uphill climb. France and the UK may buy in, but convincing the Germans and the EU may be difficult.

In effect, walking out of the deal may work to Iran’s advantage in the long run. In the short run, it may simply move Germany and the EU closer to Russia and Iran.

That surely won’t be a happy outcome for Trump, or America.