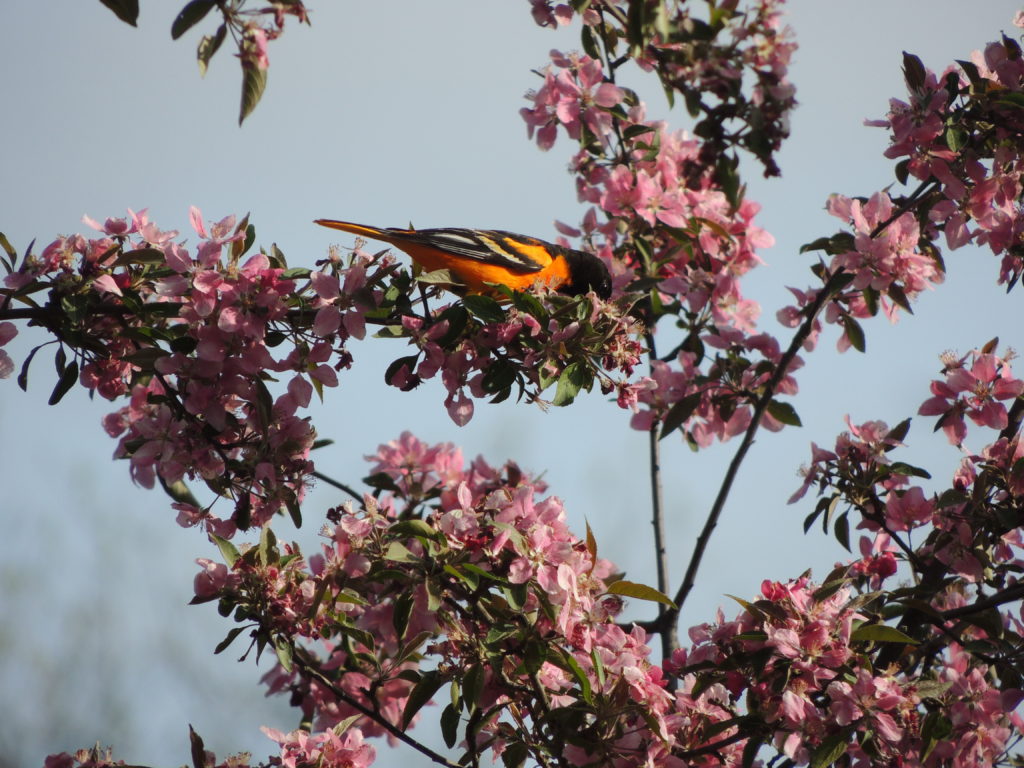 Orchard Oriole in crab apple tree  –  May 2014 photo by Wrongo

We are divided, and nothing shows that better than the callous remark about John McCain’s brain cancer by White House staffer Kelly Sadler. She said, regarding McCain’s unwillingness to vote for Gina Haspel for CIA Director, “It doesn’t matter, he’s dying anyway.”  Press Secretary Sarah Sanders then said, “I am sure this conversation is going to leak, too. And that’s just disgusting.”

Axios reported that WH strategic communications director Mercedes Schlapp said, “You can put this on the record, I stand with Kelly Sadler.” That is the same Mercedes Schlapp who walked out of the WH Correspondents Dinner when she felt that Michelle Wolf’s routine spoofing Sara Sanders’s eye makeup was over the line.

And yet, she stands by Kelly Sadler’s making a joke at the expense of a dying John McCain. Hypocrisy is alive and well in the White House.

Sadler’s comments almost made Wrongo want to reconsider John McCain’s maverickitude, and warm up to his career as an unvarnished political hack who loyally served the GOP.

But he can’t. There was absolutely no difference between McCain and right-wingers on any economic issue. In 2016, he changed his mind that presidents should be able to choose who they want to put on the Supreme Court and announced that a Hillary presidency would result in the Scalia seat remaining unfilled until Republicans took power.

So, despite his vote not to eliminate Obamacare, let’s continue to have a clear eye for hackery and hypocrisy, wherever we see them.

The NYT’s Week in Review section was filled yesterday with op-eds about how important it is for liberals to moderate their outrage. On the front page, above-the-fold, was an article titled: “Liberals, You’re Not As Smart as You Think“, by Gerard Alexander, an associate professor at the University of Virginia.

OTOH, Professor Alexander was right to point out that liberals can be as guilty of being arrogant and insulting as conservatives. Much of what the right says is angry, closed minded and based on ignorance.

And they say it loudly and often to anyone who will listen.

Progressives need to understand that if our views are based on smugness and arrogance, or if we fail to check all of the facts before arguing, we are unlikely to convince anyone to come over to our side. It does no good to malign a group with broad brush strokes.

But simply turning the other cheek and making nice has landed us where we are.

The problem is that Dr. Alexander implies that there are two equally valid polarities in US politics, and those who love Trump must be regarded as respectable as those who loath him. These are not equal: One side likes a leader who tears things down without any plan for replacement. The other side does not appreciate him in the slightest.

Alexander’s work reads as sloppy thinking from a blogger, not the work of a political scientist at a premiere university. The Trumpalos are willing to do whatever is necessary to stay in power. And those who voted for Trump show a great deal of comfort with anger and outrage, regardless of how Alexander thinks they should be perceived by the rest of us.

Their calls to cool it are good news. We’re getting under their skin.

Time to double down. We need to make our case clearly, and to all who will listen.

Time to wake up America, we are sliding down to a dangerous level. To help you wake up, here is Gil Scott-Heron with “The Revolution Will Not Be Televised”. The song’s title was originally a popular slogan among the 1960s Black Power movements in the US:

Scott-Heron has it right. The revolution will be streamed.

I quite agree with the sentiment that “Progressives need to understand that if our views are based on smugness and arrogance, or if we fail to check all of the facts before arguing, we are unlikely to convince anyone to come over to our side. It does no good to malign a group with broad brush strokes.”

Not only does it do no good, it is counterproductive. I believe it is precisely what tipped the election. I’ve been saying that since way before the election. Usually I get a blank stare or am mistaken for a Trump defender supporter or defender.