Yesterday we wrote about Buzzfeed’s story that Michael Cohen lied to Congress about Trump’s efforts to get a Moscow hotel, and that Trump asked him to do it. After Saturday’s Wrongologist was published, Mueller’s spokesperson, Peter Carr issued a statement denying the Buzzfeed story:

Buzzfeed’s description of specific statements to the special counsel’s office, and characterization of documents and testimony obtained by this office, regarding Michael Cohen’s congressional testimony are not accurate.

Some are lamenting it as another case of fake news directed at Trump. Raul Ilargi, at The Automatic Earth, whom Wrongo admires, said:

Is this the worst day for fake news to date? It’s hard to keep track. It’s just that this one was taken up by so many hoping for, finally!  Impeachment. Please Lord make it stop.

But maybe what we saw really isn’t fake news. Marcy Wheeler reports that Buzzfeed’s story differs from the sworn testimony. She points out that a discrepancy between the Special Counsel’s Cohen sentencing memo and the Buzzfeed story is that the memo merely indicated that Cohen committed perjury to benefit the Trump messaging, not that he’d been ordered to do it. If Cohen was encouraged or directed to do it by Trump personally, it isn’t as obvious as Buzzfeed said it was.

So, there are differences in what Buzzfeed reported, and what is in Cohen’s testimony. That doesn’t mean that the Buzzfeed story is fake news. Mueller is probably defending the Special Council’s reputation against accusations of leaking. It also seems possible that Peter Carr may have been trying to tamp down the Buzzfeed allegation that Trump “directed” Cohen to lie, because that may be difficult to prove.

Cohen is a cooperating witness for Mueller. If and when Mueller makes a case that the Trump Tower deal was part of a larger election year conspiracy, they will need Cohen to testify, and have him describe how he kept Trump and Don Jr. in the loop for the possible deal.

The lesson is not to take much, if any news at face value. And not to get out too far over our skis when it comes to breaking news about Trump.

On to cartoons. Since we didn’t publish them last Sunday, today there’s a bumper crop.

Junk food for furloughed workers, good stuff for the plutocrats, paid by your tax dollars: 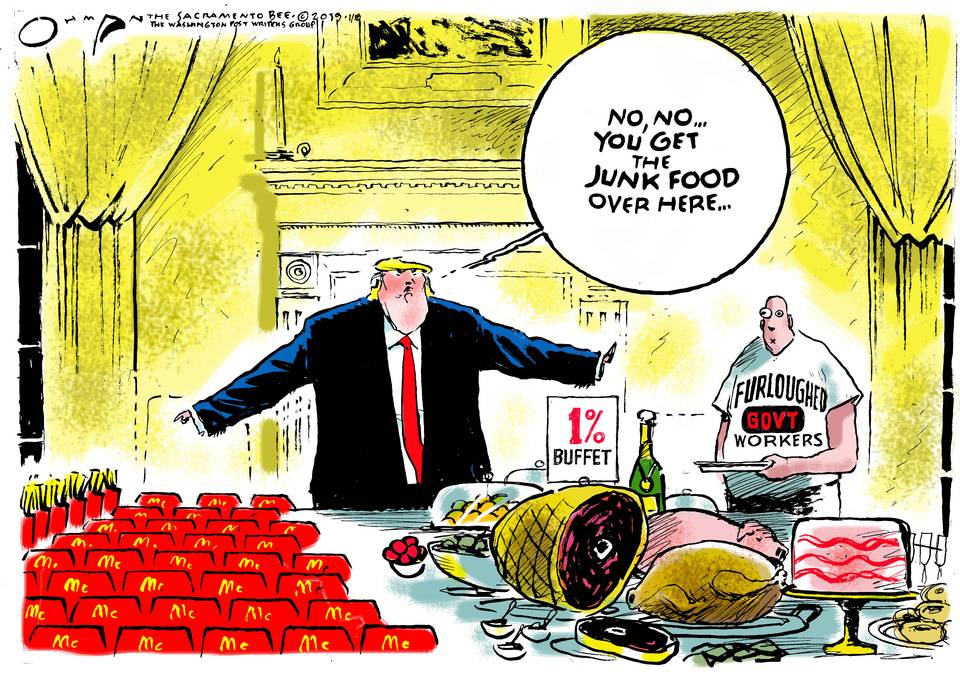 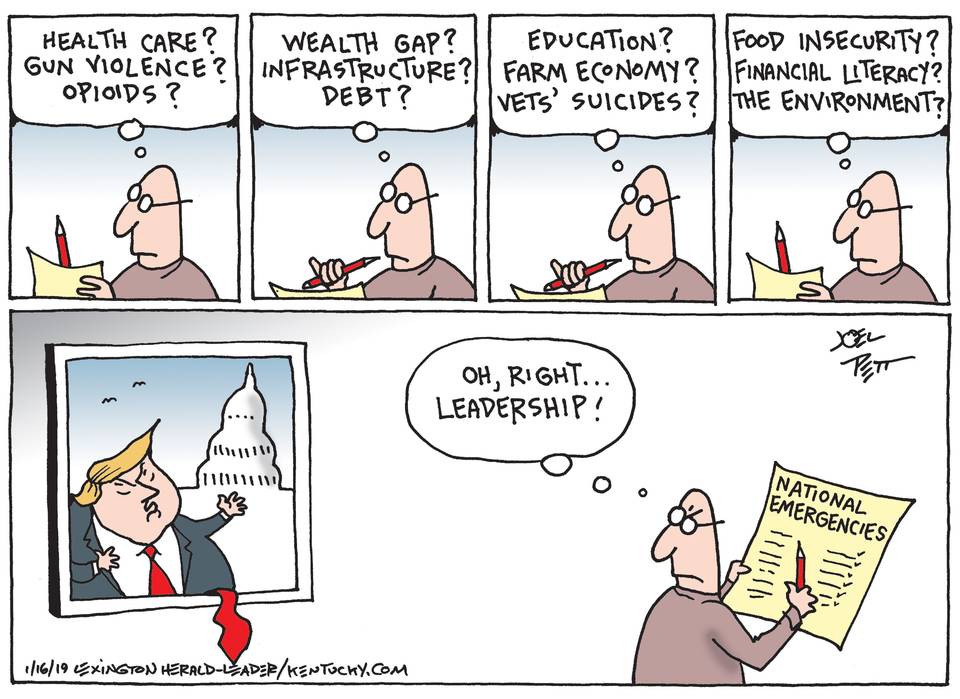 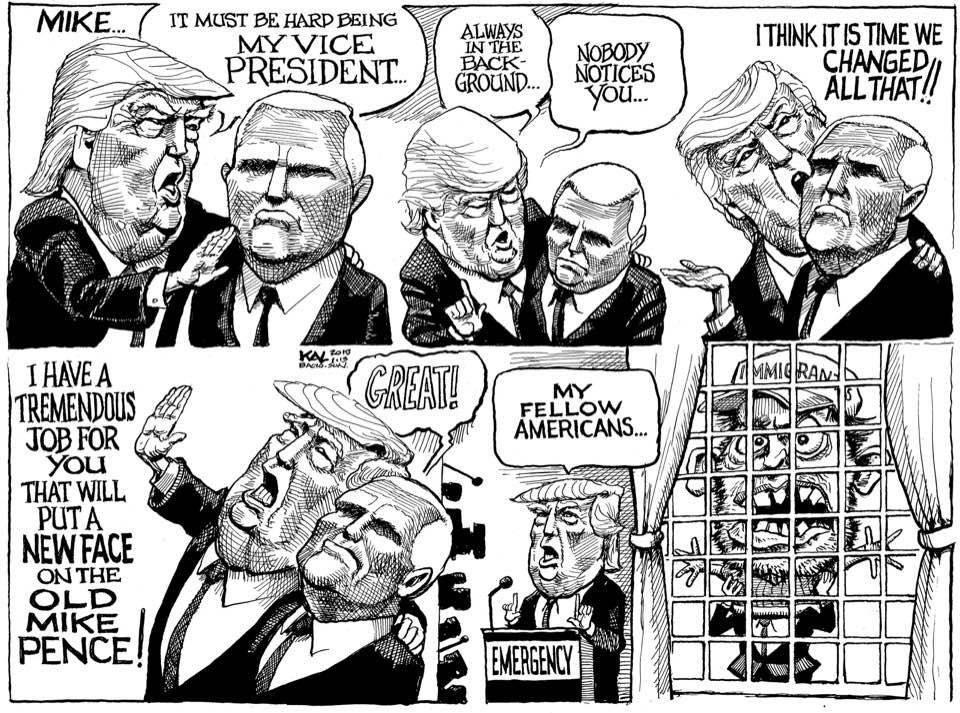 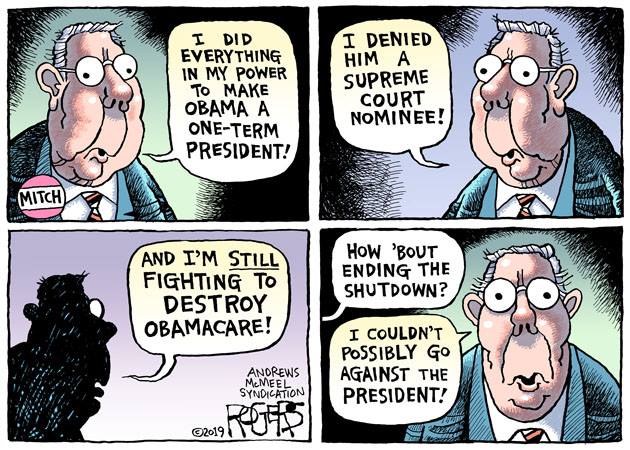 Racism is mainstream in the Trump/GOP party, it’s not just Steve King: 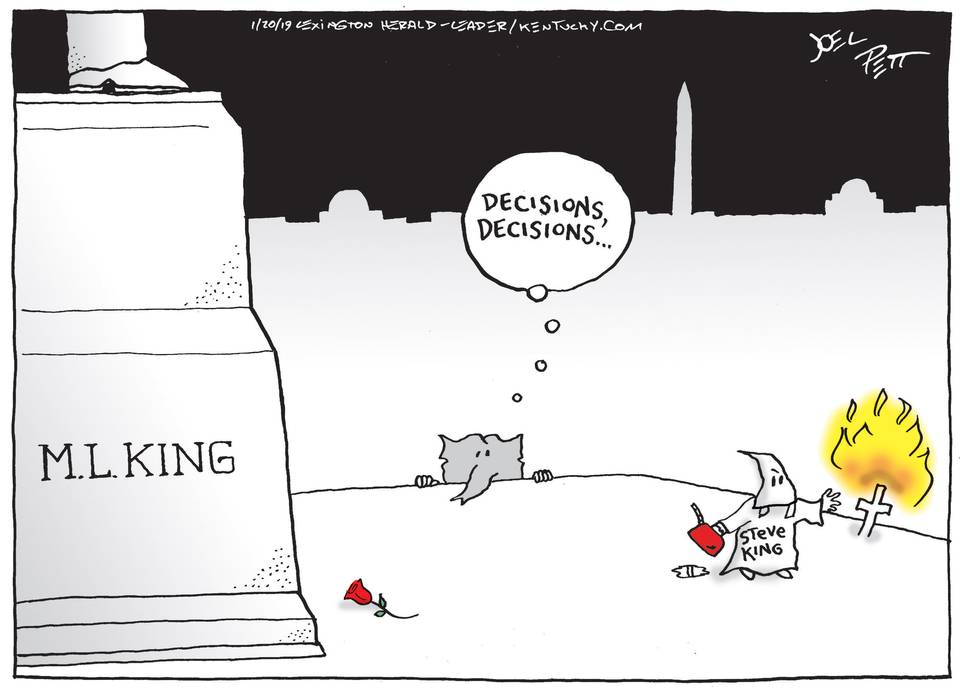 The GOP will take some token actions. No vote to expel, or to run a non-racist in the 2020 Iowa primary: 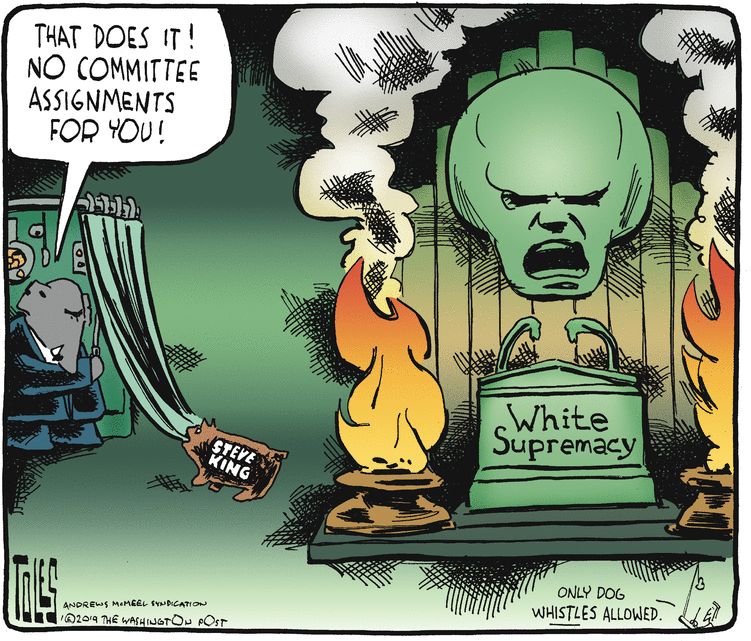 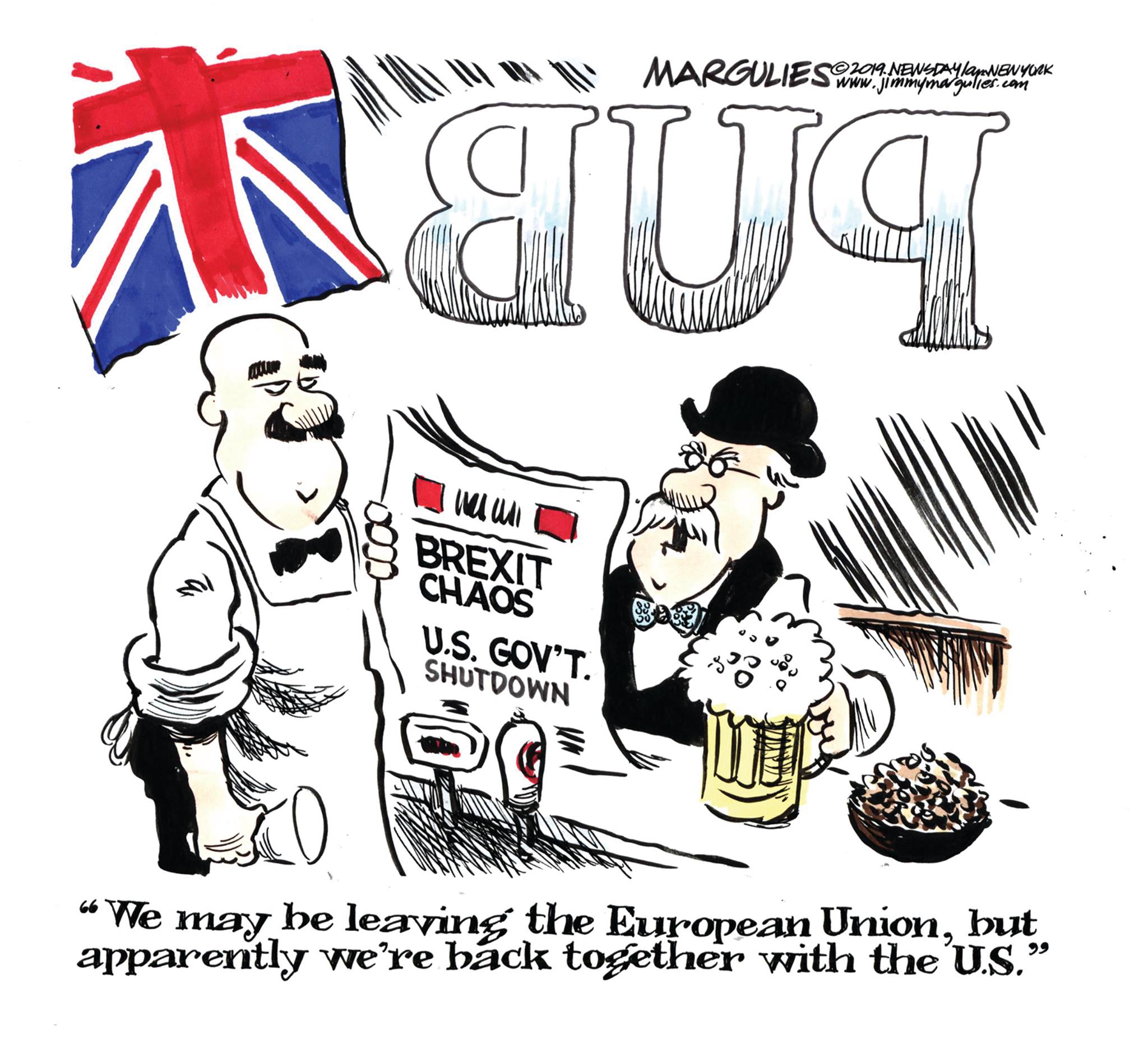 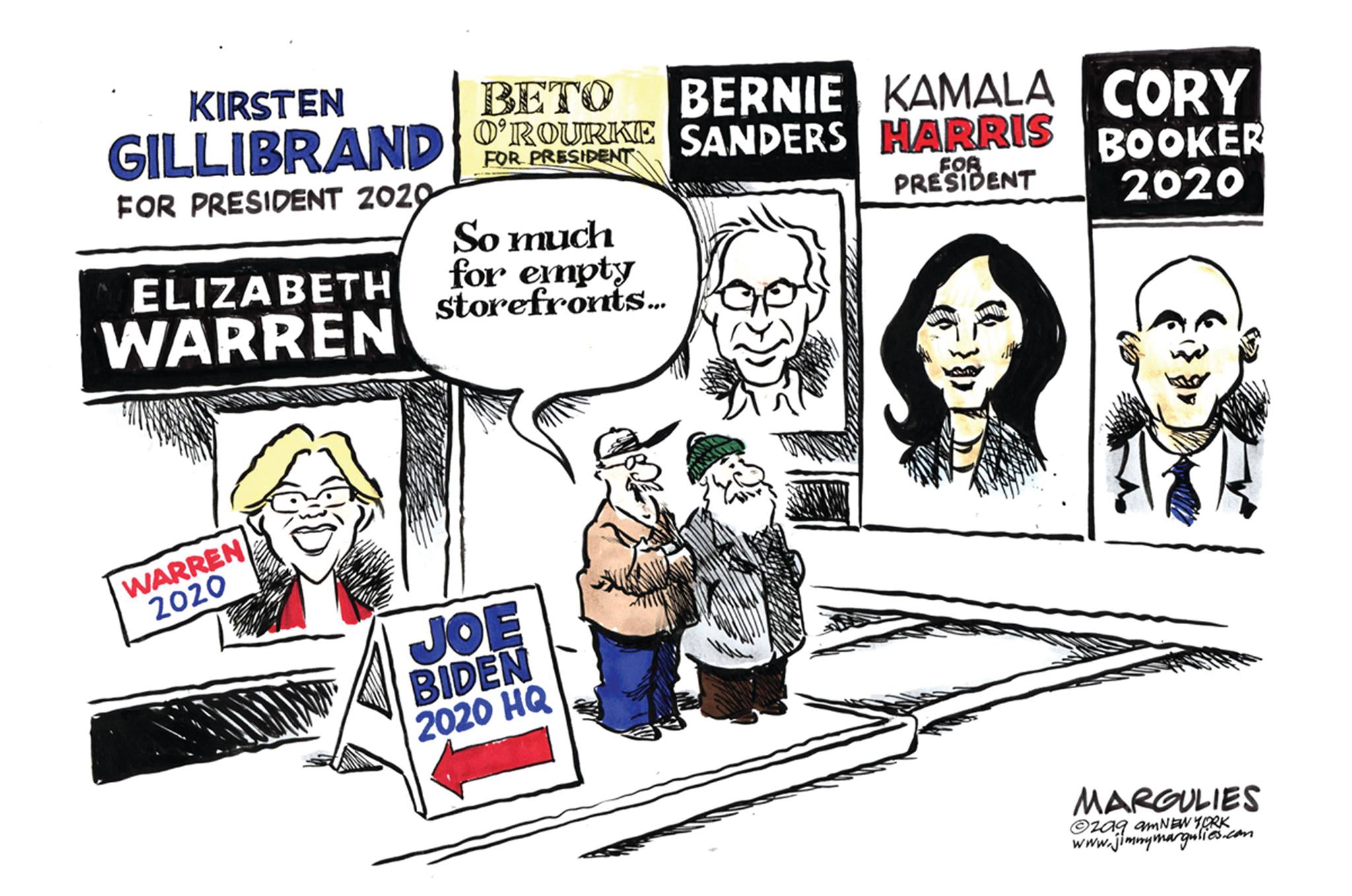 Sometimes getting your story straight is tough, and has consequences. Ask Buzzfeed: 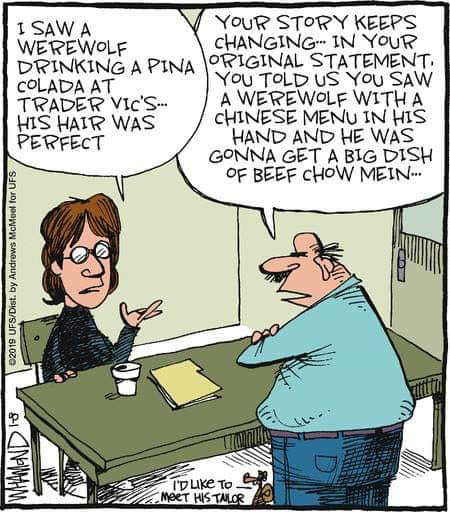