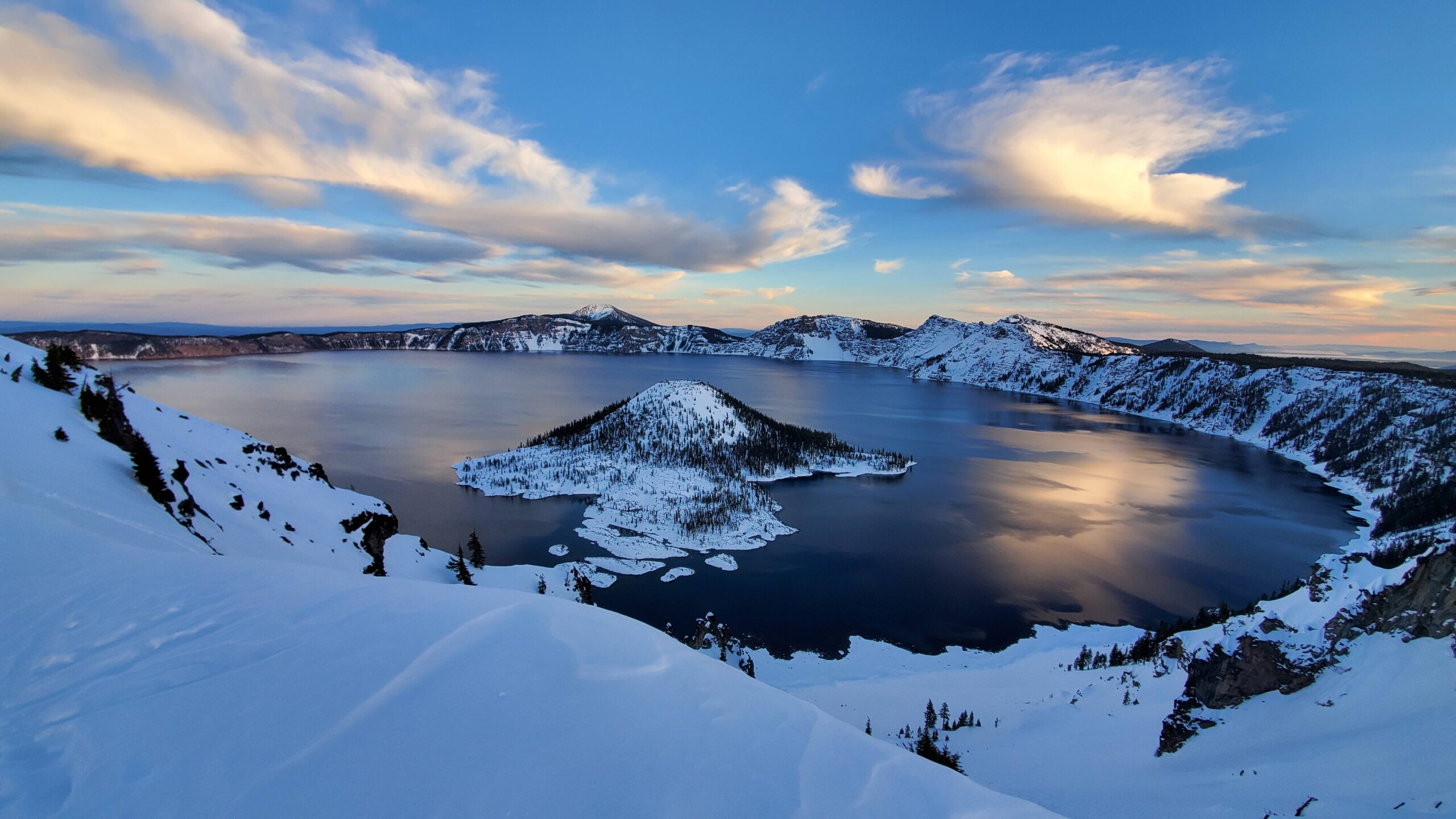 Crater Lake, OR – November 2020 photo via imagur. This is the fifth time we’ve featured Crater Lake.

What’s it gonna take for America to wake up to the Republican’s ongoing attempted coup? From the WaPo:

A team of 25 Post reporters contacted aides for every Republican by email and phone asking three questions: 1) Who won the presidential contest? 2) Do you support or oppose Trump’s continuing efforts to claim victory? 3) If Biden wins a majority in the Electoral College, will you accept him as the legitimately elected president? Most refused to answer. Here are the WaPo’s findings in a chart: 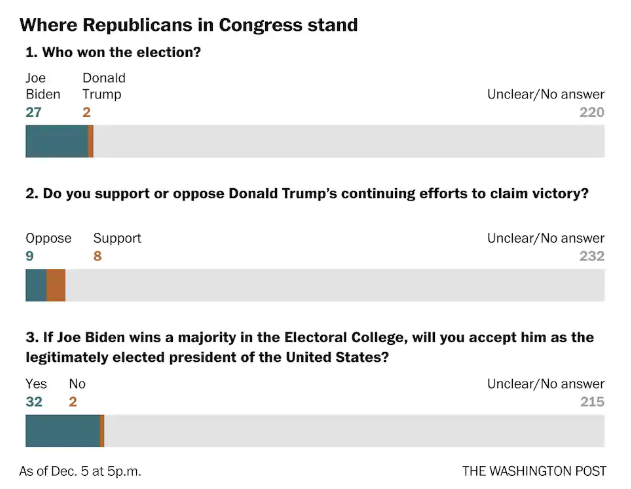 When 215 of the 249 Republicans in Congress (86%) refuse to answer whether Biden would be the legitimately elected president, we’re looking at an attempted coup. These people aren’t waiting to get all the facts, or let the process play out. We shouldn’t be calling it anything else.

Just three state elections were really close — that is, decided by less than a one percent margin: Arizona, Georgia, and Wisconsin. Biden won all of them. The only semi-close state that Trump won was North Carolina, by a 1.3% margin. But had the three really close states gone for Trump, we would be looking at an Electoral College (EC) tie, 269-269. Then the House would re-elect Trump, thanks to the Constitutional process for breaking Electoral College ties, which gives each state one vote in the House to determine the next president.

Republicans control a majority of the seats in 26 House delegations, Democrats control 22, with two split evenly. That would mean a Trump re-election. It’s important to again emphasize that the EC would then have overturned the clear will of the people, showing how terribly flawed the EC truly is.

Since Republicans are still unwilling to say Biden won, even though all three of those states have certified him as the winner, imagine what we would be going through today if a single state hung in the balance?

And if the election had come down to a margin of a few thousand votes in Pennsylvania, you better believe the Supreme Court would have happily voted to toss out enough votes to provide a Republican victory. We shouldn’t feel sanguine about Biden’s clear victory.

We saw this in Wisconsin. Their Supreme Court just had a couple of 4-3 decisions on ridiculous cases brought by Trump, cases that argued for decisions that would be contrary to their constitution. Three of the four Republican judges voted with Trump anyway. Fortunately, one Republican judge actually cared a little about the law. That’s just too close.

And Politico is reporting that Rep. Mo Brooks, (R-AL) plans to challenge the Electoral College votes when Congress moves to certify Joe Biden’s victory on January 6. He’s looking for a Senator to join his challenge, though he noted that doing so would largely be a symbolic, and not practical, undertaking.

Time to wake up America! Our democracy is hanging by a thread. Despite Biden receiving more votes than any other president, despite getting the largest vote percentage against an opponent since 1932 (when Roosevelt defeated Hoover), Trump is still trying to overturn the election. And most Republicans are silent or looking the other way, hoping Trump succeeds.

To help you wake up, listen to Elvin Bishop and Charlie Musselwhite perform “What the Hell” which they released in August. You get Charlie’s harmonica and Elvin’s guitar. It’s a protest song for our times:

Here are their great lyrics:

Look at the shape, the shape the Nation’s in
This situation is a shame and a sin
I want to know, how could a good thing go so wrong?
Tell me, what the hell is going on?

Sometimes I don’t know whether to cry or laugh
Half the people in this country can’t stand the other half
I want to know, why can’t we halfway get along?
People, people, what the hell is going on?

He is the president but wants to be the king
Know what I like about the guy? Not a goddamn thing
I want to know, how can four years seem so long?
Lord have mercy, what the hell is going on?

The one time wife and I went to Crater Lake was in late September. The day before we wore shorts. As we approached the site the weather turned wintry and we arrived in a full blizzard – so could see little. It was noon. We checked in at 1 pm and because of the number of cancellations, we were able to stay in the main lodge instead of a elsewhere on site. By 2 pm, the snow stopped and suddenly the visit which we thought would be a bust became a magical interlude. The image below is from that visit. We have dinner at the lodge – and again because of cancellations, service was excellent and not rushed. I need to go back some day.

Nice photo Terry, but you need to embed the flickr link in comments for the public to see it.