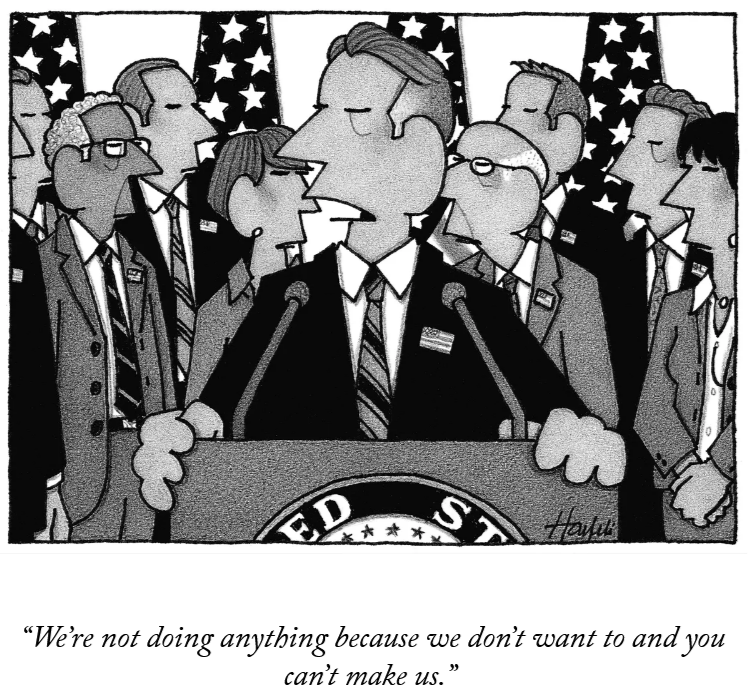 Can Democrats move their agenda forward? Will we ever see an infrastructure bill, or a voting rights bill signed by Biden? How should Democrats deal with the voting restrictions that several states are putting in place to make it more difficult to win elections, and possibly cause the Dems to lose both Houses of Congress in 2022?

Even though most of the Party’s voters say that their representatives in DC should be willing to do whatever it takes to eliminate the filibuster, Democrats in Congress seem hamstrung by what some in Congress say is a need for bipartisanship on fundamental legislation, like the filibuster and voting rights.

This hamstringing is occurring throughout America. Consider New Jersey: Their Congressional redistricting process is technically bipartisan; but like in prior decades, it’s in a completely partisan place.

New Jersey has a bipartisan redistricting commission. Leaders from each Party appoint six members to the 13-member commission. Those 12 members then pick a 13th member who serves as a tiebreaker, and a safety valve to prevent partisanship. That sounds well, bipartisan. This is the fourth redistricting cycle where this process has been used for NJ’s Congressional redistricting.

The commission members picked an academic as the tiebreaker in 1991 and 2001, and a former state attorney general in 2011. Last time, the tiebreaking member sided with Republicans. Despite that, the resulting district maps worked out well for Democrats, as they currently hold a 10-2 edge in the NJ Congressional delegation.

New Jersey is a great example of how the Congressional map can change over a decade. The tiebreaker initially helped Republicans 10 years ago, but the demographics in those districts have changed, And Democrats now over-perform in their local Congressional races.

This time around, the 12 members of the commission were unable to agree on the 13th member of the commission. Both sides proposed a retired judge from their respective Parties. So now, according to law, it’s the state Supreme Court’s job to pick one or the other. The court has until Aug. 10 to decide on the tiebreaker.

From the New Jersey Globe:

“The State Constitution puts the burden of settling a tie-vote on the tiebreaker on the Supreme Court, who must now choose between the two candidates advanced by the commission: former Supreme Court Justice John E. Wallace, Jr., a Democrat, and former Superior Court Judge Marina Corodemus, a Republican….Make no mistake: this is an election. There are as many as seven voters.  The winner will either be a Democrat or a Republican. Election Day is August 10.”

In NJ, Democrats and Republicans have never agreed on a map without employing a “bipartisan” tiebreaker. But since this the first time the two Parties couldn’t agree on a 13th member for Congressional redistricting, it’s the first time the Supreme Court option will be used.

If this isn’t unusual enough, the NJ Supreme Court will vote on the Congressional tiebreaker before the US Census Bureau transmits the census numbers to the state. This year, it’s delayed. It won’t happen until September 30, so the process of redistricting can’t begin until then.

Even though three of the Jersey Justices are Republicans and four were nominated by GOP governors, it’s unclear if the Supreme Court will vote in line with their Party’s choice. When state Republicans went to the Supreme Court to fight a Covid-related borrowing plan, the Court unanimously backed up a plan approved by Democratic Governor Murphy and the Democratic-controlled legislature.

This standoff is a reminder that even in states that don’t have an outwardly partisan redistricting process, bipartisan disputes are hard to avoid.

Time to wake up America! In these times when there is little to no trust between the Parties, there is no such thing as bipartisanship.

To help you (and President Biden, along with Sens. Manchin and Sinema) wake up, here is a band from Russia and Ukraine, Leonid & Friends, featuring the Rox Bros, doing a cover of Steely Dan’s “My Old School” from SD’s 1973 album “Countdown to Ecstasy”.

The song’s lyrics tell the story of a drug bust at Bard College (named “Annandale” in the lyrics) while both Donald Fagen and Walter Becker were students there, and how a female acquaintance had inadvertently betrayed them to “Daddy Gee” (G. Gordon Liddy, then a local prosecutor):

Steely Dan tunes demand absolute precision and attention to detail, and these guys nail it!

Great video! I am a big Steely Dan fan and this band nailed it.

Agree completely that bipartisanship is dead today. New Jersey is an excellent example.

Nobody should be fooled into thinking that redistricting is anything but partisan. The commission is made up of equal numbers in a state that is reliably loyal to one party. The problem, as I see it, is that members of both parties are sorely tempted to create districts that are “safe” for each, thus making districts like mine where a 17 term congressman scarcely has to run or use his seniority to support any legislation favored by constituents outside his automatic base. That my district stretches across the state in a carefully designed way to assure my congressman’s safe seat is no accident and could not have occurred without tradeoffs granted by the other party’s commissioners. This process is “fair” in that it is horse-trading conducted by two teams with near-equal strength. It is not democratic in that it reduces the influence of voters.