When Obama and family got off AF One in Cuba, he was met by the Cuban Foreign Minister (FM): 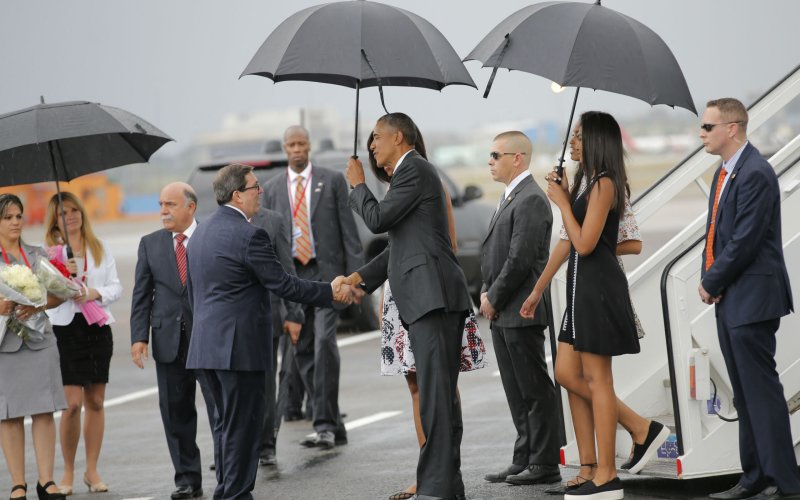 Obama doesn’t really take his responsibility as POTUS seriously. He obviously doesn’t respect the office and thus is indifferent to insults to the office.

Calm down Foxtards! Here’s what you need to know:

In the US, a foreign head of state or head of government is formally welcomed by the president on the South Lawn of the White House. You can check out our State Department’s process here.

In Cuba it is similar:

So, how is Obama being greeted at the airport by the Cuban FM, an “insult”?

BTW, both Obama in DC and Castro in Cuba greeted Pope Francis at the airport when he visited, so Trump was half-right. Castro did go to the airport once.

Mr. Obama made two decisions this week, to visit Cuba, and to not attend Justice Scalia’s funeral.

The Scalia decision may not be so smart. From Politico:

President Barack Obama is preparing for a fierce battle with the Senate over the Supreme Court vacancy, but he’s not planning to attend Justice Antonin Scalia’s funeral — a decision that puzzled even some of his allies and incensed conservative media.

Yep, the decision to forgo the funeral on Saturday is called a partisan snub by the Right. They ignore that Mr. Obama and first lady Michelle Obama will go to the Supreme Court on Friday to pay their respects to Justice Scalia while the justice lies in repose in the Court’s Great Hall.

Politico reports there is little precedent for presidents attending the funerals of sitting justices. President George W. Bush attended, and eulogized Supreme Court Chief Justice William Rehnquist in 2005. But before Rehnquist, the last justice to die in office was Robert H. Jackson in 1954.

It’s a can’t-win situation for Obama. If he attends, the right will pick apart his mannerisms, facial expressions and interactions with other attendees, criticizing what they will call snubs of various kinds.

While not attending again shows Obama’s tin ear when it comes to domestic politics, his decision is acceptable. Attending the funeral would not suddenly change the stance of Republicans who think that Obama should not nominate a Scalia replacement.

Obama and Cuban President Raul Castro announced a diplomatic thaw in  December 2014, after more than 50 years of disruption and confrontation between the two countries. The US and Cuba formally resumed bilateral relations in July, 2015. A month later, US Secretary of State, John Kerry, officially opened the US Embassy in Havana, becoming the first US diplomatic head to visit Cuba in 70 years.

Why do we care about opening Cuba? Here is one reason: a story in Forbes this week underlines what we can expect from opening relations.

Horace Clemmons and Saul Berenthal, both 72-year-old retired software engineers, are slated to become the first Americans since 1959 to set up a manufacturing plant in Cuba. Their plan: produce small, easily maintained tractors for use by family farmers. Under new regulations issued by the Obama administration, the US Treasury Department’s Office of Foreign Assets Control gave the Paint Rock, AL-based partners the go-ahead last week. Once they get final approval from the Cubans…in early 2017, they’ll start building a factory in a special economic zone set up by the Cuban government in the port city of Mariel.

The Wrongologist visited Cuba in 2014. Below is a photo of tobacco farming in Pinar Del Rio, a predominantly agricultural region about 2 hours from Havana that produces 70% of Cuba’s cigar tobacco. This farmer is using oxen to plow his tobacco field. Most independent farmers use animals for plowing.

The tractors that we did see were Soviet-era imports: 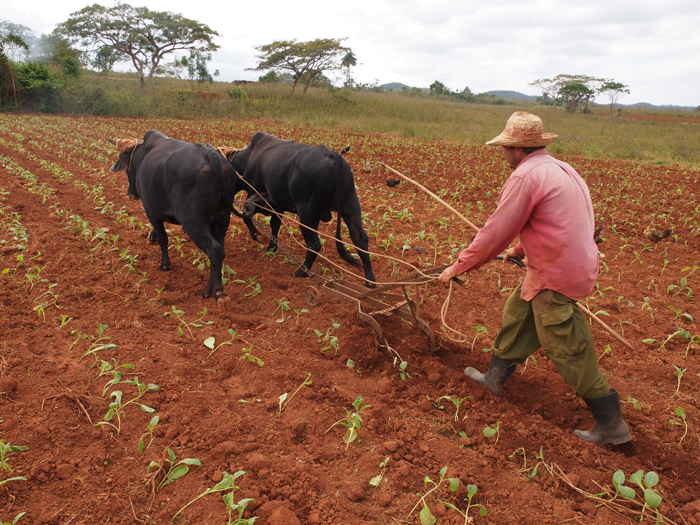 Clemmons and Berenthal got rich in tech here in the US, and identified the need for cheap tractors in Cuba. They will be showing their first tractor model at a Cuban agricultural fair in March. Why are they doing this? They have a desire to be helpful to the Cuban people, but they want profits:

Our business model says we are investing in Cuba and reinvesting any profits we make. We’ll do what we did with our other businesses. We’ll create value and then sell the company.

And was it easy for them to get US government approval? Berenthal told Forbes:

In all honesty it was tedious rather than difficult. We had to wait for the regulations to change so that the proposal we made was covered by the regulations implemented over the last nine months.

Isn’t it interesting that two entrepreneurial guys can identify a big market and jump in before the big US agricultural manufacturers?

And despite Mr. Cruz’ and Mr. Rubio’s yelling about Obama dealing with a Communist regime, the Cuban government appears willing to offer financial backing to private farmers who choose to buy from a privately owned US company.

Kudos to Obama, and to Clemmons and Berenthal. It is long overdue, yet somehow, just in time.