That was the term used on Wednesday by Ed Yardeni, president of Yardeni Research:

“It’s all at once a health crisis, financial crisis and economic crisis. We need to fix the health part of it before we have it solved, but we can take financial and fiscal steps to blunt its effects.”

JPMorgan Chase said it forecasts a 14% decline in gross domestic product in the second quarter. That’s enough to scare anyone. In a partial response, the Trump administration suspended evictions, authorized the Defense Production Act, and is eyeing a stimulus package worth about $1 trillion.

The Treasury Department is circulating a two-page sheet of priorities that it wants to see in the final deal:

And Wednesday was another day when Trump appeared in front of the press, attempting to look as if he’s a war president. The bad news was that they again halted trading on the stock markets during his press conference.

At Wednesday’s close, the Dow was down another 1,338 points. We’ve now lost almost all of the gains accrued during the Trump administration. Nearly every asset class – stocks, bonds, gold, and oil – fell as investors fled to the safety of cash.

Mr. Market has decided that cash is king. The smart money can’t decide whether Trump’s offering too much stimulus. If so, things must be really bad. And if he’s not offering enough, then there’s no leadership.

Here’s one way to look at the Dow’s performance:

The WH needs to shut him up. Each time he speaks, things get worse for the rest of us.

Inside this crisis is perhaps the biggest political challenge for Democrats: They have to agree to help an incompetent president and his Party avoid killing their constituents.

That’s a bitter pill, particularly in an election year.

It isn’t a stretch to see how Democrats would be painted as obstructionists if they fail to support what Trump wants at a time when millions of people need a cash bridge to help them across economic difficulties.

Wrongo thinks helping people is a good idea, and a total of $2,000 is better than nothing, but what will it really do? The average US mortgage payment is over $1,000, while the median rent for a 1-bedroom apartment is $1,234. So for a couple, in most cases, one month’s housing costs will eat up about 25% of the total cash from the government. The rest will go to car expenses, the cell phone, perhaps student debt payments. Maybe, if people can stretch, it will last two months.

It’s helpful, but far from enough if employers remain closed for two months or more.

Any loans to large corporations is a huge mistake. The big four US airlines – Delta, United, American, and Southwest – whose stocks are getting crushed because they will run out of cash in a few months, would be the primary recipients of that $50 billion bailout. But together, they incinerated $43.7 billion in cash on share buybacks since 2012. Now they are looking to get that back from the taxpayers. Those buybacks enriched the very shareholders that Trump now wants to bail out.

Perhaps Trump said it best, although it was a while ago: “We’re seeing a stock market like no one has ever seen before.”

Trump spent the first three years of his presidency trying to erase Obama’s legacy.  Now, The Great Virus Crash in Trump’s last year will erase his. 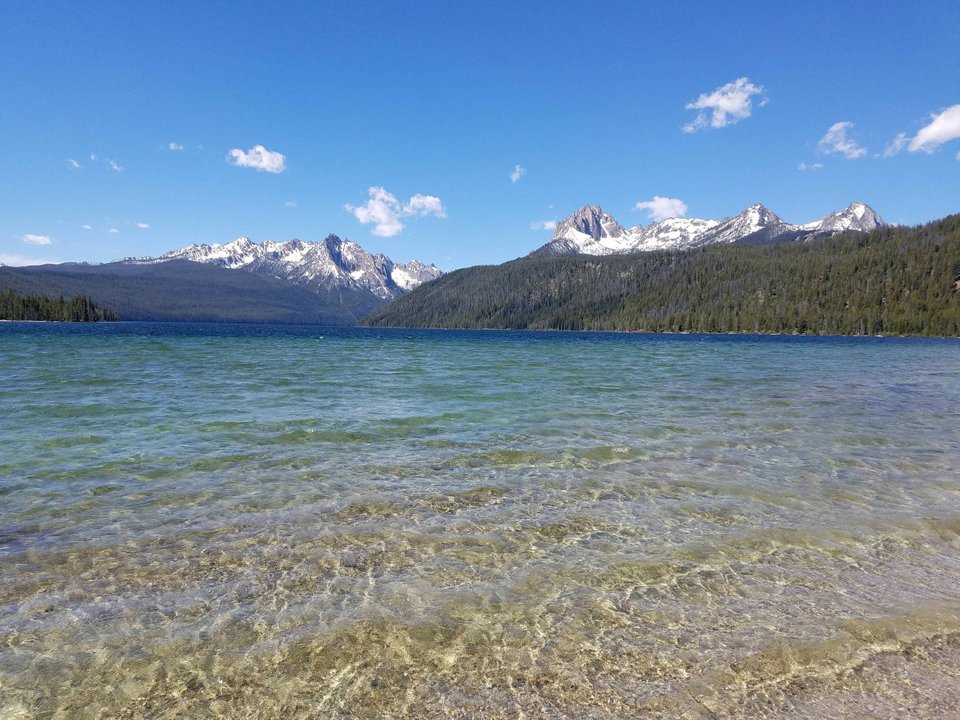 General Motors announced yesterday that it will halt production at five North American facilities and cut 14,700 jobs as it deals with slowing sedan sales and the impact of Donald Trump’s tariffs.

The cuts will also hit 15% of GM’s 54,000 white-collar workforce, about 8,100 people. And some 18,000 GM workers have already been asked to accept voluntary buy-outs. By next year, it will no longer make the Buick LaCrosse, the Chevrolet Impala, or the Cadillac CT6 sedan. It’s also killing the Chevy Volt plug-in hybrid. GM’s CEO Mary Barra:

“Changing market conditions” means that GM’s sales are down despite offering enormous cash incentives to potential buyers. GM’s new-vehicle deliveries in the US plunged 11% in the third quarter, and are down 1.2% for the year. In Canada, GM’s sales have dropped 1.6% so far this year.

GM’s goal in restructuring is to save $6 billion in cash flow a year by year-end 2020. But saving all this money will cost a lot: GM estimates it at $3.0 billion to $3.8 billion, including asset write-downs, pension charges, and up to $2.0 billion in employee-related and other cash-based expenses.

GM will have to borrow this money. They said they expect to fund the restructuring costs through a new credit facility. The money has to be borrowed because GM blew through $13.9 billion in cash on share buybacks over the past four years: 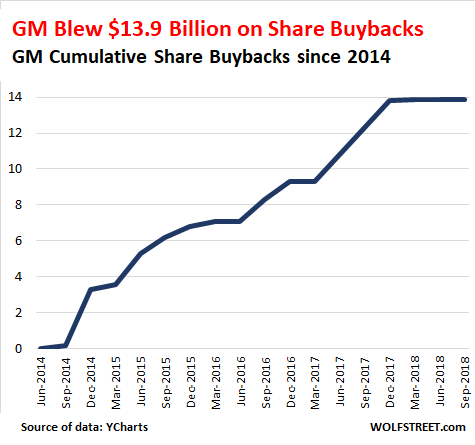 Despite spending $14 billion on share buybacks, the price of GM’s shares fell 10% over the same period.

You’d think that GM, a company that went bankrupt not too long ago, would be conservative in how it uses its cash. Nope, they wasted their cash on stock buybacks, and now they have to take out loans in order to reposition the company in its market.

Failing to anticipate where their market is going isn’t a new GM story. It had a 46% share of the car market in 1961, and now has a 17.6% share. They emerged from bankruptcy in 2009, only to be laying off workers and shutting plants in 2018.

Net, GM has cost taxpayers $7.9 billion, while the top decision-makers spent $14 billion largely to enrich themselves.

How were they enriched? Share buybacks boost stock prices. Usually the salary and bonus plans for top executives in public companies are keyed to share price, so the incentive to prop up the share price includes a personal reward. The Chairman and Board set the compensation plans for the CEO and C-suite. The composition of Boards is strongly influenced by the major shareholders, including the large stock funds, who want share price gains, along with a few buddies of the CEO.

We’ve just witnessed a decade of stock buybacks by large firms. They are doing that as opposed to investing in R&D, plant efficiency or market expansion. But companies can only go so far with financial engineering before they actually have to improve their businesses, and now GM has been burned by share buybacks.

This is more corporate greed that leads to the little guy facing real suffering when jobs are lost.

GM is a shot across the bow. The auto industry will follow with additional capacity reduction. Volkswagen has already warned that the shift to Electric Vehicles (EV’s) will drastically cut employment at its plants that manufacture internal combustion (IC) components. EV vehicle production is far less costly than IC vehicle production, so this will be a real and ongoing issue.

OTOH, car manufacturers all have an EV option, but people are still buying Toyota’s, Honda’s and Mazda’s, even though only a few are EV’s.

This new GM “plan” seems more like a smoke screen for being caught AGAIN behind a market that is moving away from them.

And possibly, a sucker-in-waiting when the latest, greatest plan to make GM great again only works out for GM’s executives. 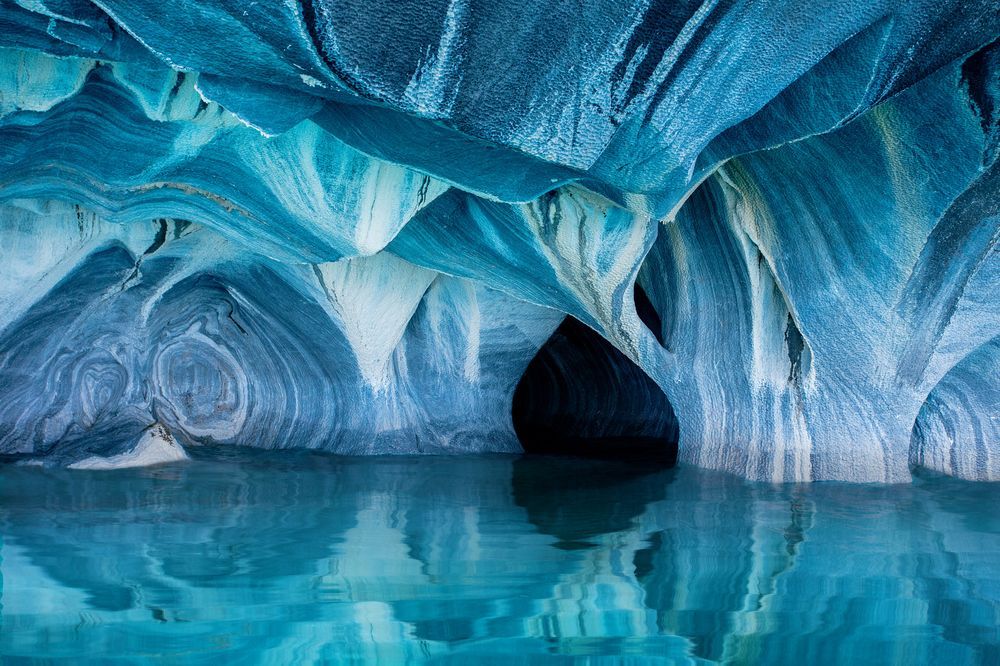 Any idea which investor-types are the largest buyers of US stocks? It is the corporations themselves, buying back their own stock. They are followed by Exchange Traded Funds (ETFs). Here is a graphic:

The entities shoveling more money into the stock market than any other this year, as has been the case for the past few years, remain corporations. Buybacks are on pace to reach nearly $550 billion, or $150 billion more than ETFs.

None of that cash is going into new markets, new products, R & D, or innovation. The buyback is equivalent to the CEO saying: “I’ve got no idea what we should be doing to improve profits or market share”.  Arne Alsin at Forbes said this:

For most of the 20th century, stock buybacks were deemed illegal because they were thought to be a form of stock market manipulation. But since 1982, when they were essentially legalized by the SEC, buybacks have become perhaps the most popular financial engineering tool in the C-Suite tool shed. And it’s obvious why Wall Street loves them: Buying back company stock can inflate a company’s share price and boost its earnings per share — metrics that often guide lucrative executive bonuses.

Alsin suggests that buybacks are big because we’re in a period of technological disruption. New industries like cloud computing, electric cars, and streaming video are rapidly changing the world. But older companies are slow to adapt, and rather than investing in R & D (or simply holding onto cash) the corporate boards of legacy businesses are bolstering stock prices the only way they know how: buying back their stock.

Alsin offers Hewlett-Packard as an example:

In the last decade, the company has invested $47 billion in stock buybacks — which is nearly double the company’s current market capitalization. That risk is senseless. HP knows they are facing existential threats from upstart competitors, but instead of paying out dividends or letting cash accrue on the balance sheet, HP is choosing the riskiest option.

Buybacks are the result of several converging forces: pressure from activist shareholders; executive compensation programs that tie pay to per-share earnings and share prices that buybacks can boost; increased global competition; and fear of making bets on products and services that may not pay off.

This financialization of non-financial firms increasingly crowds out other types of investment, to the detriment of lower level employees, whose jobs are less secure. It can hurt long-term investors, who hold these stocks in their 401(k)s and pension plans.

Serving customers, creating innovative new products, employing workers, and taking care of the environment are not the objectives of these firms.

So think carefully about the companies you invest in, or buy from.

Wrongo supports Folk Alley, and recommends that everyone should. Ungar composed Ashokan Farewell in 1982. It is written in the style of a Scottish lament. Ungar sometimes introduces it as:

A Scottish lament written by a Jewish guy from the Bronx.

Ungar says that Ken Burns heard the song in 1984, and asked to use it in his (then) upcoming PBS series, “The Civil War”. The original version and a few other versions are heard 25 times in the show, for a surprising total of 59 minutes and 33 seconds of the 11-hour series. For the non-math majors, that is 9% of the show!