Yesterday, Mr. Obama announced that the US and Cuba will resume diplomatic relations after 55 years of dysfunction and belligerence. Predictably, a few Congressional leaders and Republican presidential hopefuls lashed out at the president and the decision. Jeb Bush said:

The benefactors of President Obama’s ill-advised move will be the Castro brothers.

This was followed by these predictable words from Sen. McCain (R-AZ) and his paramour, Sen. Huckleberry Butch Me Up (R-SC), who said that the policy shift reflected that: (brackets by the Wrongologist)

America and the values it stands for [are] in retreat and decline…It is about the appeasement of autocratic dictators, thugs and adversaries, diminishing America’s influence in the world.

The Obama party line is: “the current policy has failed for 55 years. The Castro brothers have outlasted 8 US presidents. Let’s try something different.”

And here we are. This is now possible because the first generation of Cuban émigrés no longer completely control the Cuban voting bloc in Florida, the most crucial swing state to both parties. Consider the following:

• According to the Pew Research Center, there are about 1.9 million Cuban-Americans in the US. 70% of Cuban-Americans live in Florida, making them the most geographically concentrated of the 12 largest Hispanic origin groups.
• We know that the younger Cuban-Americans shifted toward the left during the 2012 election. In 2012, Obama won a majority of the Cuban-American vote in Miami. He won Cubans nationally by two points.

Here is how the political sands have shifted: 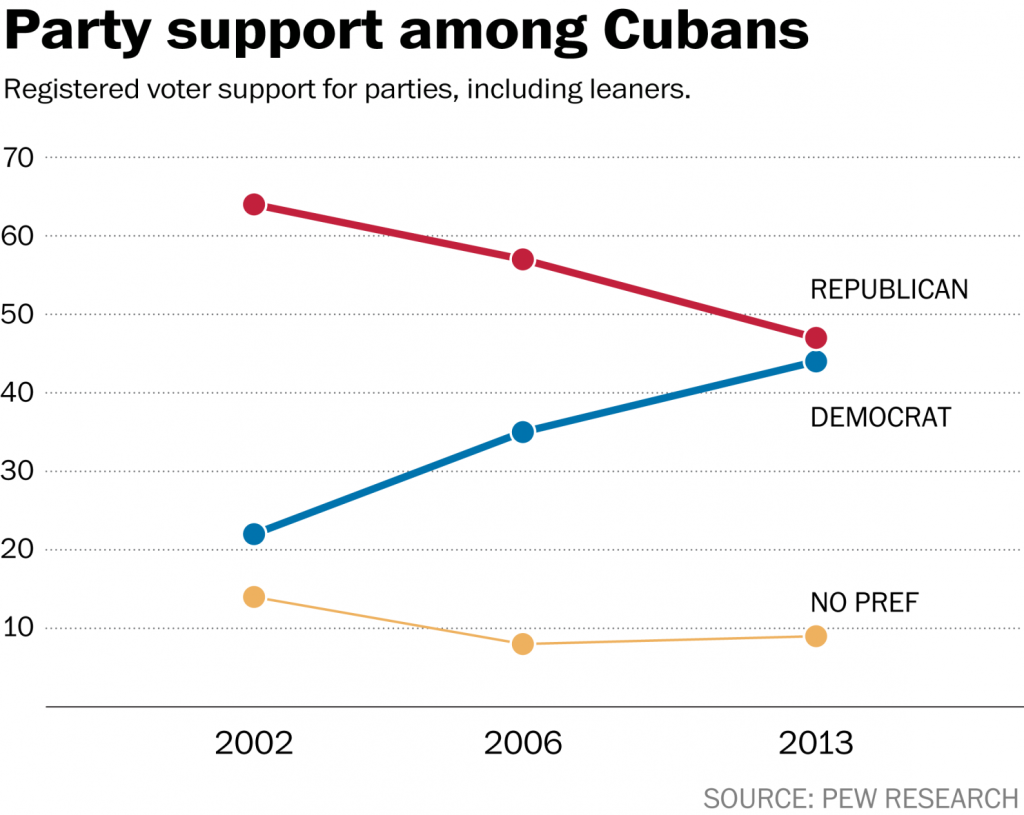 Thus, politics no longer drives the decision about our relationship with Cuba. Our 55 year-old hard line position was more about those upper middle class Cuban-American émigrés who hoped that the embargo would eventually force the return of houses that they abandoned 55 years ago when they left Cuba for Miami.

A final reason why this works for both sides right now is the Saudi decision to force lower oil prices. Cuba cannot sustain its economy on its own. As an example, Cuba now imports an estimated 80% percent of the food its people consume, at a cost of more than $1.5 billion per year. Venezuela has been Cuba’s prime financial benefactor, but the Venezuelan economy is in terrible shape, even before the current sharp decline in the price of oil, which is its primary source of state revenue.

They will soon be forced to cut Cuba’s rations. That will be a huge opening for the US, particularly since Cuba’s former benefactor, Russia, has its own economic difficulties as well.

It’s been wrong for the US to continue to hold a cold war grudge against Cuba. The US could most readily help the people of Cuba by opening up trade between the two countries.

Let’s close with a song about going to Cuba by Jackson Browne:

Sample lyric:
I’m going to drink the Ron Anejo
and walk out on the Malecon
in one hand a Monte Cristo
and in the other an ice cream cone.

And they truly love their ice cream.

Good luck to the Cubans, a lovely people, and a lovely country.