It didn’t take long for America’s pollsters to get feedback about the CIA’s torture program. Pew interviewed 1001 people from December 11-14. 500 respondents were interviewed on a landline telephone, and 501 were interviewed on a cell phone. About a third each were Republicans, Democrats and Independents. The results are surprising:

• 51% of the public think the CIA methods were justified.
• 56% believe that torture provided intelligence that helped prevent terrorist attacks.

Here are the top line results: 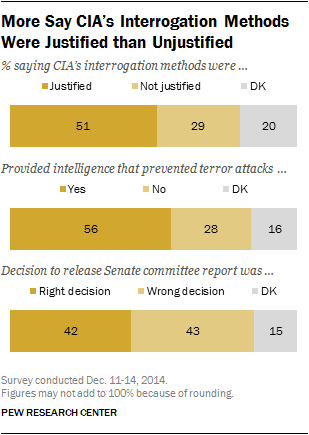 So, according to a bare majority of the American people, torture is justified, and it works.

Before 9/11, most Americans were against torture. Yet here we are. The drumbeat of propaganda and our deep need to justify what America does (America is good, therefore America does not do evil), has coarsened the country.

Young people also are divided over the CIA’s post-9/11 methods: 44% of those under 30 say that the torture methods were justified, while 36% disagree. Among those 50 and older, 60% think the methods were justified. The over 65 group had the highest agreement at 62%. You can review the detailed survey results here.

While we could quibble about the form of the questions asked, every demographic had at least a plurality in favor of torture: men and women, young and old, white and non-white. The exception was Democrats, who did not believe that torture was justified, although they believed it was helpful.

The opinions of conservative and moderate Democrats were much different: 48% say the CIA interrogations were justified compared with 32% who say they were not.

What does this say about America?

The physical damage done on 9/11 was nothing compared to the psychological damage to the US population. It has seemingly unleashed a latent fascism. We got nuked emotionally, we haven’t recovered, and we may never recover.

We are propagandized to an incredible degree. While people must ultimately take responsibility for their own opinions and actions, the media industry is bent on shaping perception and they are very good at it. Think television isn’t influential? Last night, the Wrongologist’s local TV news covered the hostage situation in Sydney, Australia. But the facts were used only as a jumping off point: The vast majority of the talking head’s time was spent quoting people from the DC security apparatus regarding how such attacks could happen here, how such attacks mean that we should to be hyper vigilant. This continual spinning up of average American’s fears about terror creates a response that isn’t easily calmed.

In post 9/11 America, our politicians have decided that the ends justify the means. They understand that instilling fear pays dividends politically. Their message to the people is that “any means necessary” is acceptable in order to keep us safe. At first, it was the gradual erosion of free speech and habeas corpus. Then, the “collect everything” mode of the NSA.

Now, for the majority of Americans, its “OK, torture if you have to, just keep me safe.”

Those people who think torture is justified are good people who have lost their moral compass, or whose compass points only in a bad direction. This is the dark side of moral relativity: the greater good can lead to terrible outcomes like torture. People do bad things all the time, particularly when they think the good produced outweighs the bad. If a few people’s suffering creates enough “good” (for the rest of us) and that good outweighs the suffering of the few, then, we guess that we should have no issue with it. Thus, torture is now acceptable to the majority of Americans.

Ain’t that America: Fearful, and Dysfunctional.

If we look to the middle ages and the years following, where many were tortured to determine just who was a witch, we can see from our vantage point exactly what you get with torture, false confessions that confirm your prejudices.

The police have used these same tactics (or similar) to induce confusion and a confession from innocent kids.

So no, we don’t get anything worth having from torture.

For some time now, and certainly since 9/11, I have come to believe that if we ever were, as our anthem suggests, “the land of the free and the home of the brave” we are that no longer. Land of the chronically afraid and home of the neuroticly suspicious is a more accurace discription. While the main stream would not touch this idea, one hears from some circles that the terrorists have achieved an important victory, not over our military but over the condition of the American soul.
The acceptance of tourture and white Americas ho- hum attitude towrd police brutality of minorities are but two manifestations of the soul numbing that is now characteristic of who we are. When we accept a government that runs rough shod over its citizens, lies to its citizens, spies on its citizens, we have ceased to be who we think we are and have become something unrecognizable to the authors of our constitution.