What’s with the police union presidents in New York City, St. Louis and Cleveland? All are outraged by fairly tepid comments on the recent and controversial actions of their members, and all want apologies now, dammit. Let’s start with Cleveland.

TPM reports that the Cleveland police union has demanded that the Cleveland Browns football team apologize for a player who wore a T-shirt before last Sunday’s game protesting the police shootings of two black people. Here is the T-shirt: 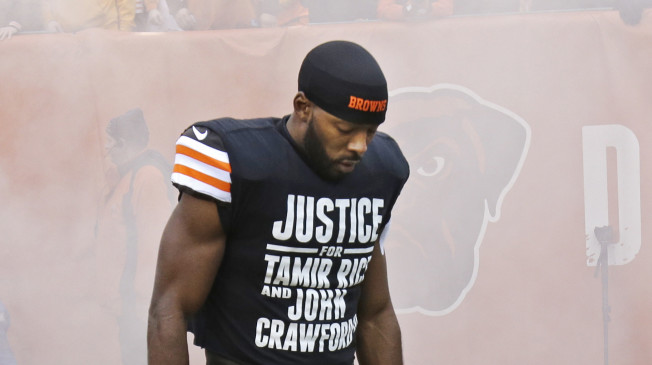 To refresh your memory, Rice was the 12 year old kid killed last month when a Cleveland police officer shot him when he mistook the boy’s toy gun for a real weapon. John Crawford, 22, was killed by police in August at a Cleveland area Wal-Mart while he was holding an air rifle. Crawford was shot while doing absolutely nothing illegal. He was not threatening anyone. He was on his phone in Walmart carrying an item that’s sold at the store. Cops showed up and shot him.

It’s pretty pathetic when athletes think they know the law…They should stick to what they know best on the field. The Cleveland Police protect and serve the Browns stadium and the Browns organization owes us an apology.

So, nice stadium ya got there. Be a shame if something happened to it. The Browns did not apologize.

On to St. Louis, where the police overreacted earlier this month after a few Rams players entered their stadium making the “hands up, don’t shoot” gesture popular with protesters in Ferguson, Missouri. The St. Louis Police Association called the gesture “tasteless, offensive and inflammatory”, asked the Rams team for an apology, and called on the NFL to punish the players who ran on to the field using the “hands up” gesture.

And in New York City, the city’s Patrolman’s Benevolent Association (PBA) have been angered by Mayor Bill de Blasio’s reaction to the killing of Eric Garner. And NYC’s cops are now telling the Mayor to stay away from cop funerals. The PBA distributed a flier to members, blaring: “DON’T LET THEM INSULT YOUR SACRIFICE!” Cops were encouraged to sign and submit the “Don’t Insult My Sacrifice” waiver to ban what they see as a cop-bashing mayor from their funerals. The NYC mayor traditionally attends all funerals for fallen officers.

De Blasio basically said that he didn’t think the NYPD should be chokeholding its citizens to death, a matter that may require a seasoned NYC lawyer Mitchel Ashley or others to intervene for the families left behind. PBA President Patrick Lynch reacted by accusing the mayor of throwing cops “under the bus.”

We’ve had to literally train him, as families have all over this city for decades, in how to take special care in any encounter he has with the police officers who are there to protect him…

That was too much, and PBA president Lynch replied: (emphasis by the Wrongologist)

These thin-skinned reactions seem totally natural, and consistent with a culture of “comply or die”.

And it’s remarkable to see just how incredibly insular, tone-deaf and hyper-sensitive these police union presidents, and at least some of their rank and file, seem to be.

In Cleveland, the union president should be more concerned about the recently completed two-year Justice Department study that found the Cleveland police have a pattern of “unreasonable and unnecessary use of force”. Will different tactics emerge as the Cleveland police adapt to their consent decree?

We need to rein in our police. There is way too much “comply or else” out on the streets. We see weapons meant for warfare pointed at people trying to exercise the small shred of their free speech rights that remain. All of these cops who killed in these controversial cases have said that in the same circumstances, they would shoot/choke again.

Who should receive the apologies? Hint: it’s not the cops.

The column above needs to be updated with the news that on Monday, the Supreme Court decided that our police don’t have to know the law when they stop or detain a citizen. The message is that ignorance of the law is not a barrier to policing. From Think Progress:

There is one simple concept that law students learn in their very first weeks of criminal law class: Ignorance of the law is no excuse. This principle means that when an individual violates the law, it doesn’t matter whether or not they knew what the law said. If it’s a crime, and they are found to have committed the elements of that crime, they are guilty.

But now, that rule doesn’t apply to the police. On Monday, the US Supreme Court in an 8-1 ruling, found that North Carolina cops who pulled over Nicholas Heien for a broken taillight were justified in a subsequent search of Heien’s car, even though the reason he was pulled over was not a violation of the law.

The case involved the 2009 arrest of Nicholas Heien near Dobson, North Carolina. Sgt. Matt Darisse pulled Heien over for having only one working brake light, then found a bag of cocaine while searching his vehicle and charged him with attempted drug trafficking. However, state law only requires motorists to have one brake light working at any time. Heien’s attorneys argued that this made Darisse’s search unlawful. They lost.

So, our Supremes failed to draw a line limiting the scope of police stops, at a time when they are rampant and racially disproportionate. Now, police have more leeway to stop passengers on the road, even in jurisdictions that had previously said cops are not justified when they make mistakes of law.

During the past weeks, we have heard a lot about Grand Jury procedure and the “latitude” our legal system affords police and prosecutors. That latitude apparently now includes their right to be ignorant, of our laws. That goes along with:

Now, they have latitude not to know the laws they enforce.