America has been in a defensive crouch since 9/11. The mere mention of domestic terrorists or a terrorist attack inside the US causes many of us to suspend rational thought, and beg our politicians to protect us, even though the risk of dying from a terrorist attack is very small.

The ethical question we face is: Do Americans deserve peace of mind more than Syrians refugees deserve safety?

We look to our leaders to help answer that question, but they can be cowards. They should do everything they can to help the rest of us be brave, and do the right thing, even if it entails some measure of risk. That’s true if we’re talking about restrictions on how much privacy we’ll cede to the government, or if we’re thinking about allowing Syrian refugees on our soil.

But, it seems most politicians prefer to play to our PTSD, fanning our fears.

The Paris terrorist attacks were a tactical loss in the war against ISIS. But the only way it leads to a strategic defeat, as the blog Political Violence @ A Glance writes, is if we let this attack divide us along religious lines, provoking non-Muslims vs. Muslims.

ISIS is geographically contained. To the east, Iran and the weak but stable Iraqi government are not going anywhere. To the north, the Syrian Kurds, and behind them Turkey, block ISIS. To the west, the Assad regime plus Syrian rebels block ISIS progress, particularly with the support of Russia, Iran and Hezbollah. To the south, Israel, Jordan and Saudi Arabia are supported by the US and are not likely to fall. Lebanon is the weak link, but it is supported by Iran.

Here is a view of the current state of play in Syria:

The purple area is controlled by the Syrian Kurds. The remaining open border with Turkey shown above is the primary route that ISIS uses for trade, to add jihadists and deliver war supplies. Sealing it seems to be among Russia’s top priorities, and it is also a priority for the Syrian Kurdish YPG. However, it is not a priority of the US, or Turkey.

Given these facts on the ground, the Paris attacks are militarily insignificant. However, they could be significant if we make bad decisions.

America’s post 9/11 PTSD affliction makes us happily willing to abrogate parts of the US Constitution, like the damage already done to the 4th Amendment. Consider this week’s hand-wringing about our surveillance capabilities by CIA Director John Brennan, who wants to force companies to give the government encryption keys for their new applications.

It appears that the House will vote Thursday to change the screening process for refugees from Syria and Iraq. The bill requires the government to create a new process that “certifies” that refugees aren’t a security threat. Since the bill has no recommendations about the certification process, it acts to “pause” immigration while the bureaucrats work something out.

Or, consider the religious test that some Republicans want to impose on Syrian immigrants. If we allow Syrian Christians to migrate here while banning Muslims, we have created an unconstitutional religious test that violates part of the First Amendment.

And, the backlash against Syrian immigrants by US state governors sets up a possible Muslim vs. non-Muslim confrontation. It abrogates even more of the Constitution. It is a short step from saying no Muslims in a state, to saying that only Christians can live in a particular state.

But, Chris Cillizza at the WaPo says that Democrats need to be very careful about demonizing Republicans over Syrian immigration:

The political upside for Republican politicians pushing an immigration ban on Syrians and/or Muslims as a broader response to the threat posed by the Islamic State sure looks like a political winner.

This is backed up by Pew Research Center’s 2014 survey examining Americans’ view on Islamic extremism: 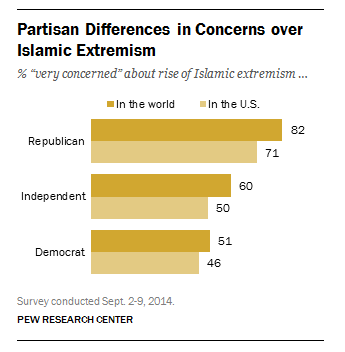 So to most Americans, it doesn’t seem xenophobic, or crazy to call for an end to accepting Syrian refugees.

OTOH, Republicans say that Second Amendment still needs more protection. There are people all across America that are willing to weaken many Amendments, but not the one that lets them walk the streets with AR-15’s.

Yet, what the electorate will remember in 2016 is that Democrats wanted more foreigners to come here, while Republicans wanted to protect them from terrorists. Fear sells and motivates. Reasoned, nuanced discussion bores us, and is ignored.

So, don’t expect leadership to be brave.

At this point, while we may have some responsibility to help protect political refugees, it is probably not worth losing an election over.

See you on Sunday

Regarding America’s PTSD, behaviorally, the symptoms may include; aggression and hostility, irrational thinking leading to self destructive acts. The Wrongologist has nailed the current national spirit following the Paris attack.
This is dangerous on a number of fronts. It changes who we are as a people. Political cartoonists are having a field day on this point; showing an America in retreat, pulling our values up by the roots along the way. One image I came across this morning, shows the Statue of Liberty holding a white flag of surrender as she steps down from her pedestal. The caption reads; “and suddenly, immerceptably, America lost the war on terror”. The shameful rhetoric of many governors and most republican candidates bear out the truth of this commentary. It is in times of threat that a people show who they really are. One might get the impression in this current chaos that we may not be the “brave” that we brag about before every NFL game, but rather something far softer and less inspiring. If that proves to be the case; if our compassion, and spirit of generousity surrenders to meanness born of irrational fear, then we will have extinguished the light that has made us unique in human history.

Great comment Fred! I’ll look for that cartoon for Sunday.