This year, millennials surpassed baby boomers as the largest share of the U.S.’s voting-age population. The US now has 88 million millennials, people born 1981 to 2000…Three of 10 voting-age Americans are millennials, and more members of the generation reach voting age each day.

Bloomberg’s data came from a landline and mobile-phone survey conducted Sept. 18-22 by Selzer & Co., including 402 adults identified as 18 to 35, and 819 other adults. The Bloomberg survey used 1981 as the birth year of the first millennials, as does Pew Research, and they used 2000 as the last birth year for the cohort. While a 15 year-old hasn’t got a whole lot in common with a 34 year-old, you have to break the age continuum somewhere.

And Millennials do not peak in the US population until 2036. So they are going to be in charge of our politics for the next 25 years. Some other facts from the Bloomberg report:

• 47.1% self-identify as “Independents”
• 55.1% voted for a Democrat in the last election
• 52% favor protecting gun rights, saying they are essential for self-defense
• 37.2% favor abortion rights
• 35.8% own a home
• 61% say there should be no cut in benefits for future retirees
• 90% say they don’t expect to receive their full share of benefits when they retire
• But 54.7% think it’s the responsibility of the federal government to make sure all Americans have health care
• 54% of Millennials favor “a bigger government providing more services” compared to 35% of Boomers

Most interesting is this graph of the political issues that are of greatest interest to Millennials: 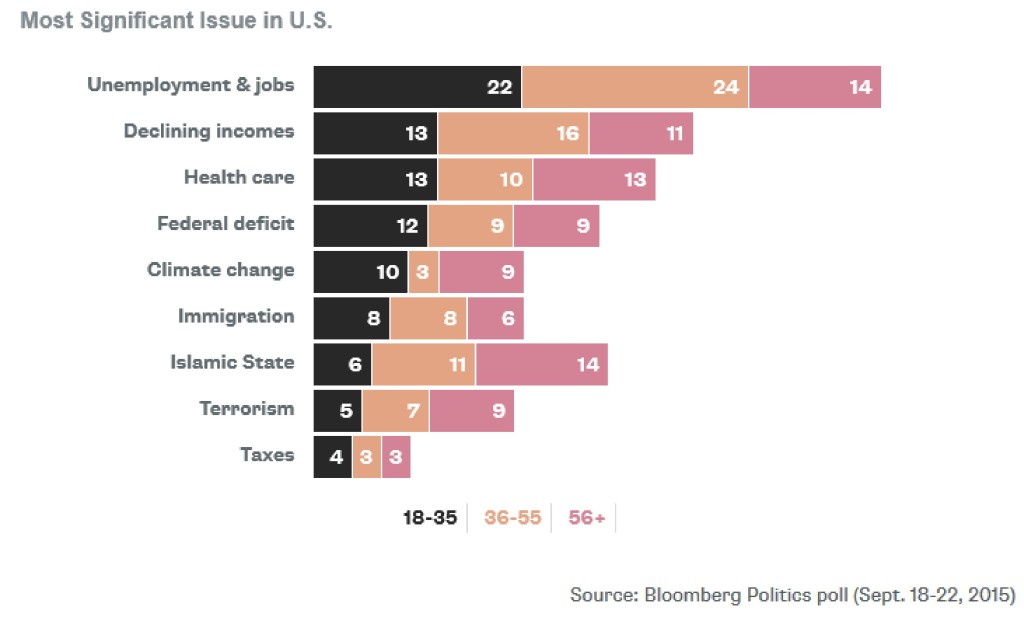 Immigration, ISIS, terrorism and taxes are at the bottom of their list, while jobs, income and healthcare are at the top. In general, the issues they rate as most important have the same relative importance as other age groups, except that Millennials rate the federal deficit higher than the rest.

Millennials are only substantially different from the thinking of other age cohorts when it comes to the Islamic State. Those in the 56+ age group are 2.3 times more likely to think ISIS is an important issue for the US, tying it for first place with jobs and unemployment for those over 56!

The implications for 2016 are enormous. The party that can turn out Millennials may coast to victory. It will be interesting to see which party and candidates are doing the best with that, although this Pew chart from their April 2015 report shows that Democrats start with an advantage: 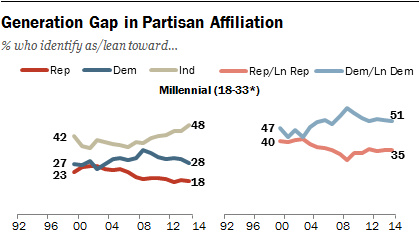 And Millennials turn out to vote in higher numbers than previous generations. About half of all eligible people ages 18-29 voted in the 2012 presidential election, roughly the same level as 2008. Compare this with the 1990’s, when youth turnout was regularly less than 40%. In particular, 2012’s high voter turnout showed the power that can accrue to the Millennial generation. From Politico: (emphasis by the Wrongologist)

Obama easily won the youth vote nationally, 67% to 30%, with young voters proving the decisive difference in Florida, Virginia, Pennsylvania and Ohio…Obama won at least 61% of the youth vote in those four states, and if Romney had achieved a 50-50 split, he could have flipped those states…

They can’t be left out of the political conversation.

The party that wins Millennials will be the one that recognizes that this is the generation that built the Uber economy. They’re problem solvers who need to feel engaged.

The party that shows them they’re the party of solving problems and who can promote a series of policies that tie these voters to the traditional base of their party will win.

And maybe create a political majority that can last for a long time.