Wrongo and Ms. Right visited Gibraltar yesterday. You are familiar with the Rock that is part of the Prudential logo. Gibraltar is a tax haven. And while it isn’t in the Panama Papers, Gibraltar has a branch of the Panamanian law firm, Mossack & Fonseca, whose leaked documents have focused all of us on tax havens and possible tax evasion.

Gibraltar has 33,000 residents and 1.5% unemployment. About 11,000 Spanish citizens cross the border daily for work, since there is about 40% unemployment in Spain.

It’s hard to imagine when you look at it from the outside, but the Rock of Gibraltar actually has more than 32 miles of tunnels inside. Most were built during WWII. In 1940, Britain, who controlled Gibraltar, was at war with Germany and Italy. The future for Gibraltar was uncertain, since it was surrounded by the enemy. Churchill and the British military believed that an attack on Gibraltar was imminent, so they decided to construct a network of tunnels, building a military fortress inside the Rock.

The tunnels eventually accommodated an underground city. They were built to house 16,000 soldiers along with enough food to last for 16 months. Within the tunnels there was a power generating station, huge fuel storage tanks, 3 hospital units, ammunition magazines, and a vehicle maintenance workshop.

Gibraltar never came under siege, and the need to accommodate thousands of troops never came to pass. But Churchill, Eisenhower, De Gaulle and others toiled inside the Rock at various times during the war. General Eisenhower used the tunnels as his headquarters for the invasion of North Africa. He later wrote:

At Gibraltar our headquarters were established in the most dismal setting we occupied during the war…. Damp, cold air in block-long passages was heavy with a stagnation that did not noticeably respond to the clattering efforts of electric fans. Through the arched ceilings came a constant drip, drip, drip of surface water that faithfully but drearily ticked off the seconds of the interminable, almost unendurable, wait which occurs between completion of a military plan and the moment action begins.

Here is an old photo of the tunnels: 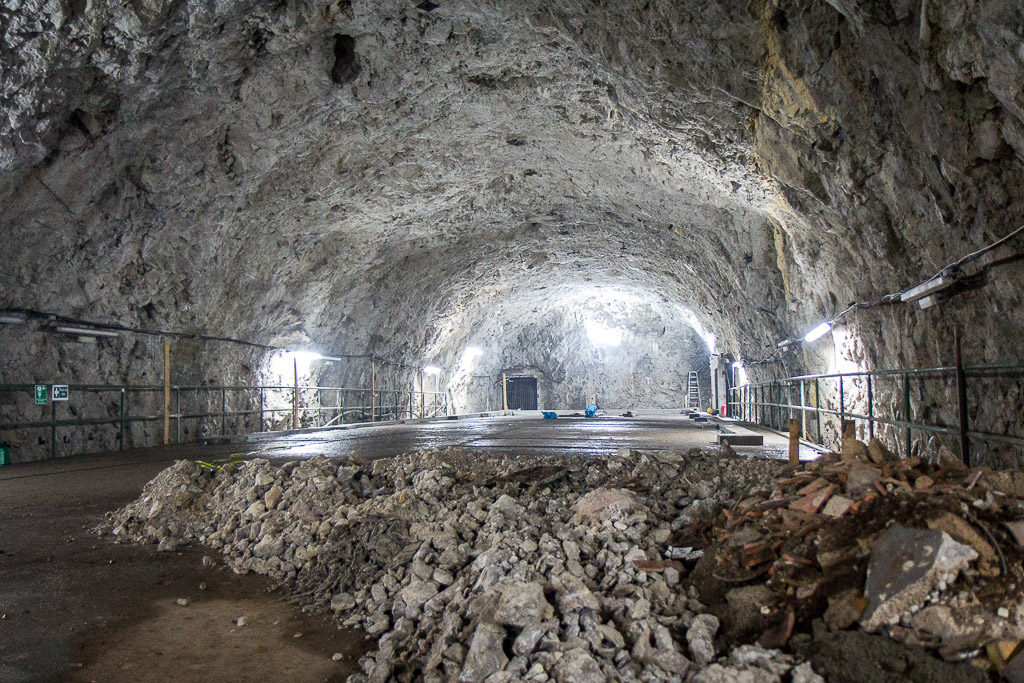 The humidity is high, in excess of 90%. The walls and ceiling are Jurassic limestone. These tunnels make you reflect on how often the military plans for something that never comes to pass.

Beyond the planning is execution, at a huge cost in human capital and materiel, often accompanied by heroic effort, and loss of lives.

We saw the same in Iraq and Afghanistan. NPR reported that the US Army abandoned more than $7 billion of equipment, about 20% of what the Army brought into Afghanistan. At the time of our wind-down, we realized that we had no way to move our equipment out via land, so it would have to be flown out, at ruinous expense.

Apparently, we failed to plan for some obvious outcomes.

We did the same thing in Iraq, bequeathing to the Iraqi government more than $580 million of equipment that supposedly saved us more than $1 billion in shipping costs. We want and need our military to plan for exigencies, even some which may seem remote. Otherwise, we can get caught with our pants down.

But how many times have we heard that “No one could have foreseen” some event or problem that causes us to lose money, people or prestige on the global stage? We leave $8 billion of equipment in the Middle East because we didn’t plan effectively? We can’t connect the dots between Saudi immigrants taking jet pilot lessons and Osama bin Laden’s rumored plans to attack the US?

The threat to Gibraltar was genuine. With 70+ years of hindsight, it is easy to second-guess the British tunnel building as excessive. But, at the time, there were enemy bombing raids that led to the evacuation of most civilians.

Those tunnels are an artifact of the military history of a piece of strategic ground. It was the Allies’ gateway to what was at the time, a hostile Mediterranean. Controlling Gibraltar allowed the Allies to mount the campaign in North Africa, and later, in Italy.