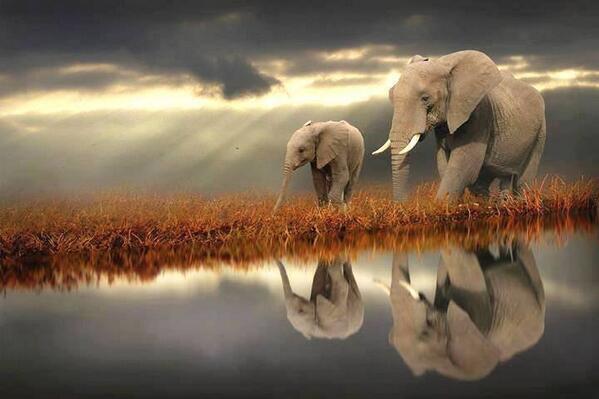 African Elephants clearly are not deficit hawks. But, neither are most Republicans in Congress, despite all their complaining about spending that adds to the deficit. Trump’s tax proposal is out. It’s interesting that the administration decided it was a good idea to put a vague blueprint laying out big tax cuts on a single sheet of paper.

It could take some time to process Trump’s “proposal”, but as the NYT says, it will bring a reckoning for Republican deficit hawks:

As President Trump’s top economic advisers faced a barrage of questions on Wednesday about the tax plan they had just unfurled, there was one that they struggled most to answer: how to keep the “massive tax cuts” they proposed from ballooning the federal deficit…Republican budget hawks will need to decide whether they want to stick to the arguments of fiscal responsibility that they used to bludgeon Democrats during the Obama era.

More from the NYT: (emphasis by the Wrongologist)

Mick Mulvaney, director of the Office of Management and Budget, who was a fierce critic of deficits when he was a member of Congress, offered a glimpse of the rationale his former colleagues might embrace. “As a conservative, that bothers me a little bit,” he said Tuesday on CNN of the possibility that Mr. Trump’s tax plan would increase the deficit. “But we also look at deficits through sort of a different lens.”

While we haven’t yet seen definitive estimates of the cost of Trump’s one-pager, it will certainly add to the deficit, and the negative numbers range up to an additional $6 Trillion over the next 10 years.

And when Treasury Secretary Mnuchin says that Trump’s tax plan “will pay for itself,” he isn’t credible. He also told ABC News that he couldn’t guarantee that middle-class families wouldn’t pay more under the proposal:

I can’t make any guarantees until this thing is done and it’s on the president’s desk. But I can tell you, that’s our number one objective in this…

Word salad. Helping the middle class is the furthest thing from their minds. Trump, Mnuchin, Ryan and the rest want to give a targeted stimulus to the rich and corporations.

They disguise tax cuts by calling them “tax reform”. Whatever they call it, they want the biggest tax cut for rich people that they can push through the House and Senate. Calling it “tax reform” is useful because “yuuge tax cuts for the rich” won’t be all that popular politically.

It’s inevitable that “middle class families” will end up paying more. Somebody’s got to pay for that massive military buildup. And the GOP cries of deficit piety are a shell game. Here is Kevin Drum:

When does this nonsense stop? Republicans aren’t deficit hawks. They haven’t been since the Reagan era. Republicans used to be deficit hawks, but the whole point of the Reagan Revolution was that tax cuts were more important than deficits. Their only concern about the deficit these days is as a handy excuse for opposing any increase to social welfare programs.

Trump’s tax plan is the same old Republican orthodoxy that has been around for decades.

Wrongo recommends this article from Fortune Magazine in 1955: “How Top Executives Live”. The GOP constantly says that if the 1% are forced to pay high taxes, they won’t work as hard to innovate and create jobs. This article, from the time when personal tax rates went from 40%-75%, shows they didn’t need low taxes back then to work hard:

The successful American executive, for example, gets up early–about 7:00 A.M.–eats a large breakfast, and rushes to his office by train or auto. It is not unusual for him, after spending from 9:00 A.M. until 6:00 P.M. in his office, to hurry home, eat dinner, and crawl into bed with a briefcase full of homework. He is constantly pressed for time…

Wrongo is cranky about the GOP’s desire to always shift the tax burden downward, and about their success in doing it. What Trump will get passed is another round of debt-financed upper-class tax cuts.

That will suit Trump and Ryan just fine.

Let’s go out with some music that references the life and times of Jonathan Demme, director of “Silence of the Lambs” and “Philadelphia”, who died on Wednesday. Demme also directed the best Rock movie ever made, “Stop Making Sense” featuring the Talking Heads. Here is “Life in Wartime” live, and that’s Parliament – Funkadelic’s Bernie Worrell on keyboards. This isn’t the first time Wrongo has posted this video: