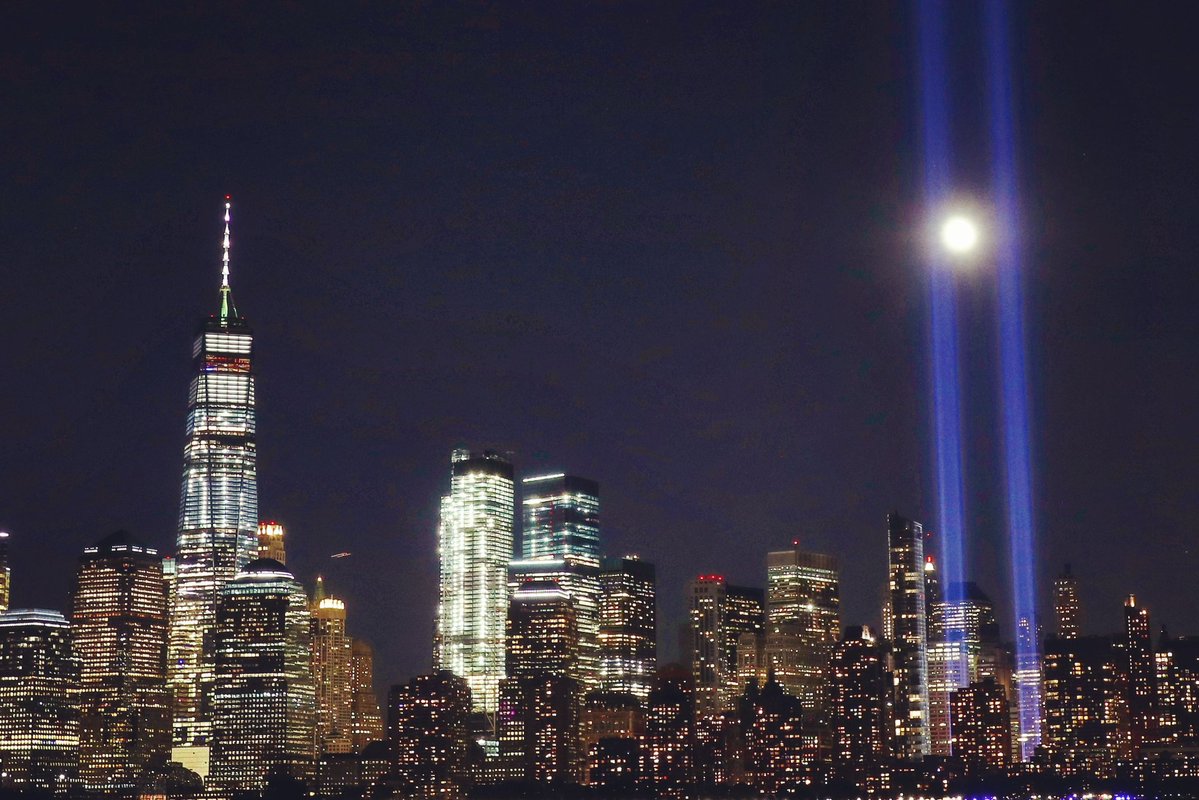 On September 8th 2017, a full moon passed through a test of the Tribute in Light at the National 911 Museum. By Gary Hershorn

Sixteen years post-9/11, we are mostly healed, but it was difficult to get here. Before 9/11, we had the luxury of dealing with one domestic disaster at a time: The San Francisco earthquake, the Chicago fire, the Galveston hurricane, Mt. St. Helens, and hurricanes Andrew and Sandy.

With the collapse of the twin towers, the Shanksville PA crash and the Pentagon attack, we had to find the ability to process the enormous shock and grief of three simultaneous events. That wasn’t easy, particularly since the media constantly reinforced the scale of the disaster, and how things would never be the same.

But most people grieved, and some helped those who were more afflicted. The government helped by shifting our focus to the foreign enemy who had committed these terrible acts.

Now on 9/11/2017, we have had two hurricanes back-to-back in the east, and have more than 100 wildfires are burning in the west. How do we process all of the shock and grief? Now our sole focus is on how to dig out, resume our lives, and rebuild. Where will the resilience come from?

And where will we find the money?

In retrospect, 9/11 helped to show us the way to heal when these unspeakable disasters happen. That’s a pretty thin smiley face on an awfully grim day in our history, but it’s true. Some healing began that very day, and time and distance from it is still (slowly) bringing people to a better place.

Some healing has yet to occur. Many still mourn family and friends who died on that day 16 years ago. Wrongo has adult children who worked in Manhattan at the time, who still will not ride the NYC subways.

The NPR show “Here and Now” had a brief segment with Rita Houston, the program director and an on-air personality for WFUV, Fordham University radio. They discussed the station’s most-requested songs on 9/11, and in the days and months afterward.

Surprisingly, the top tunes requested were those that referenced New York in a sentimental way. Mostly, they were songs that took listeners back to an earlier, more innocent time. Not many requests were for patriotic songs, or “pick us up by the bootstraps” messages. Rather, people wanted to hear songs of sweetness and emotion. Amazingly to Wrongo, the most requested song was Elton John’s “Mona Lisas and Mad Hatters” from his album “Honky Château”, written in 1980.

But for music as a healer, the October 20, 2001 “Concert for New York” can’t be beat. It was a highly visible and early part of NYC’s healing process. It has been described as one part fundraiser, one part rock-n-roll festival, and one part Irish wake.

One of the many highlights of that 4+hour show was Billy Joel’s medley of “Miami 2017 (seen the lights go out on Broadway)” and his “New York State of Mind”. Joel wrote “Miami 2017 in 1975, at the height of the NYC fiscal crisis. It describes an apocalyptic fantasy of a ruined NY that got a new, emotional second life after he performed it during the Concert for New York.

The concert brought a sense of human bonding in a time of duress. It isn’t hyperbole to say that the city began its psychological recovery that night in Madison Square Garden.

Joel now plays it frequently. Here he is with “Miami 2017” and “New York State of Mind” from the October, 2001 Concert for New York:

Most of the visible scars of 9/11 are gone, but America still lives in persistent fear. We fear Kim Jong-un and his missiles. We distrust Russia. We are afraid that ISIS will attack us on our streets.

We worry that our budget deficit will bankrupt us. We fear for our kids’ safety if they walk to school alone. We fear the mob outside our gates. We fear the immigrants already inside the gates.

So today’s wake up call is for America. We can never forget the heroes and the victims of 9/11, but we have to stop letting fear drive our actions.

Check out the audience reaction to Joel’s songs. That doesn’t look like fear, and that’s where we all need to be emotionally in 2017.