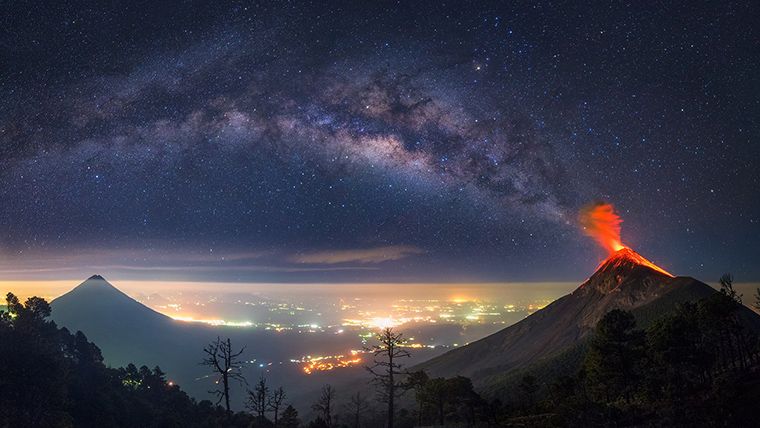 The Fuego Volcano in Guatemala erupts under the Milky Way, Antigua, Guatemala – photo by Albert Dros

While we were all focused on the Alabama senate election, on Tuesday, Donald Trump signed the National Defense Authorization Act (NDAA), a bill that sets spending limits for the US military in the coming fiscal year.

Buried in the bill is a discussion of climate change. The NDAA contains a provision making clear that “the sense of Congress” is that:

Climate change is a direct threat to the national security of the United States.

This creates an interesting moment for Trump, who signed the bill knowing this was in its language. He did not add a signing statement disavowing the provision, so he’s placing the climate change provisions of the NDAA directly opposite his stance on climate change, and his disavowal of the Paris Agreement.

By signing the bill, Trump also ordered a report on “vulnerabilities to military installations” that climate change could cause in the next 20 years. More from the bill:

As global temperatures rise, droughts and famines can lead to more failed states, which are breeding grounds of extremist and terrorist organizations…In the Marshall Islands, an Air Force radar installation built on an atoll at a cost of $1 billion, is projected to be underwater within two decades. A three-foot rise in sea levels will threaten the operations of more than 128 United States military sites, and it is possible that many of these at-risk bases could be submerged in the coming years…

This was Congress’s way of dealing with an earlier contentious debate about including the climate provision at all. The amendment to deny its inclusion failed by 185-234. Also, the military is not the agency responsible for regulating carbon emissions, so the impact of its requirements on policy may be small.

While the requirement that Mattis produce a report on the “mitigations” that will ensure “resiliency” could be construed as creating a policy response, the fact remains that there is no explicit direction that he implement any of the mitigations on which he’ll be reporting.

More from Lawfare: (brackets and emphasis by the Wrongologist)

According to the Congressional Research Service, as of 2012, the Department of Defense was ‘the largest organizational user of petroleum in the world.’…And the thousands of [military] aircraft…accounted for 22% of all jet fuel used by the US as of 2008.

The bill includes money to buy 30 more planes than the military asked for (24 reliable old F/A-18s instead of 14, and 90 of the newer lemon, the F-35, instead of 70). The US Navy asked for one new Littoral Combat Ship. The NDAA budgets for three.

Translation: $Billions for the aerospace and ship-building government contractors. This year, the Defense expenditures tab will come to about $2,160 for every man, woman and child in the US.

A quick note about Rock and Roll Hall of Fame nominee Sister Rosetta Tharpe. Most haven’t heard of her, but she was an innovator on the electric guitar. She preferred to play a Gibson SG, and she was among the first to use heavy distortion. In 1947, Sister Rosetta put the then 14-year-old Little Richard on stage. Johnny Cash said that she was his favorite singer, and biggest inspiration. When she plays, you understand where Chuck Berry got his big guitar ideas. Here is Sister Rosetta Tharpe doing “That’s All” from 1964’s “Live in Paris “album: