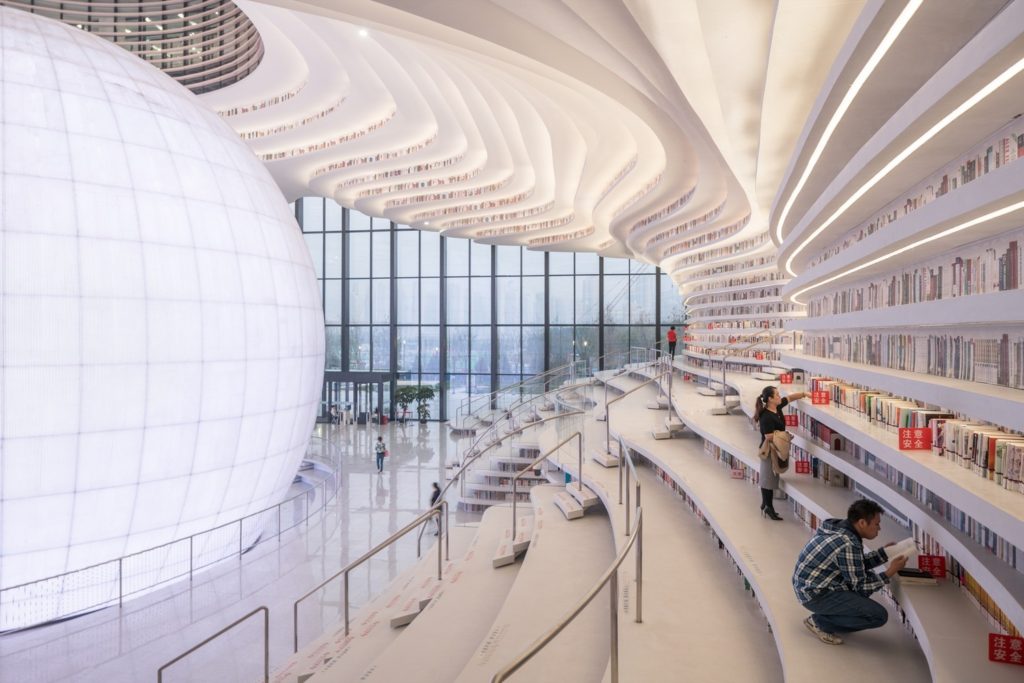 The futuristic Tianjin Binhai Library opened in November 2017. It is located just outside Beijing, China – photo by Ossip van Duivenbode

Another roller coaster week comes to an end, but Wrongo can’t let go of the Parkland shooting or the gun debate just yet. So here are a few observations from a devastating article in the Atlantic by a radiologist in Florida who saw the CT scans of some of the student’s wounds:

As I opened the CT scan last week to read the next case, I was baffled. The history simply read “gunshot wound.” I have been a radiologist in one of the busiest trauma centers in the nation for 13 years, and have diagnosed thousands of handgun injuries to the brain, lung, liver, spleen, bowel, and other vital organs. I thought that I knew all that I needed to know about gunshot wounds, but the specific pattern of injury on my computer screen was one that I had seen only once before.

In a typical handgun injury that I diagnose almost daily, a bullet leaves a laceration through an organ like the liver. To a radiologist, it appears as a linear, thin, grey bullet track through the organ. There may be bleeding and some bullet fragments.

I was looking at a CT scan of one of the victims of the shooting at Marjory Stoneman Douglas High School, who had been brought to the trauma center during my call shift. The organ looked like an overripe melon smashed by a sledgehammer, with extensive bleeding. How could a gunshot wound have caused this much damage?

The reaction in the emergency room was the same. One of the trauma surgeons opened a young victim in the operating room, and found only shreds of the organ that had been hit by a bullet from an AR-15…There was nothing left to repair, and utterly, devastatingly, nothing that could be done to fix the problem. The injury was fatal.

Routine handgun injuries leave entry and exit wounds and linear tracks through the victim’s body that are roughly the size of the bullet. If the bullet does not directly hit something crucial like the heart or the aorta, and they do not bleed to death before being transported to…a trauma center, chances are, we can save the victim. The bullets fired by an AR-15 are different; they travel at higher velocity and are far more lethal. The damage they cause is a function of the energy they impart as they pass through the body. A typical AR-15 bullet leaves the barrel traveling almost three times faster than, and imparting more than three times the energy of, a typical 9mm bullet from a handgun.

One of my ER colleagues was waiting nervously for his own children outside the school. While the shooting was still in progress, the first responders were gathering up victims whenever they could and carrying them outside the building. Even as a physician trained in trauma situations, though, there was nothing he could do at the scene to help to save the victims who had been shot with an AR-15. Most of them died on the spot, with no fighting chance at life.

This is why these weapons must be banned. Even if America sells no more of them, it will take a generation or more, for them to disappear from general use. The sooner we start banning them, the safer the country will be. Make America Safe Again!

Now, settle back in your most comfy chair with a vente cup of Red Beard Coffee’s Buckshot Blend ($17.95/lb.). The roaster says it tastes of rich caramel and apples. Then, contemplate what you can do personally to help high school kids all across America in their effort to ban AR-15’s.

While you are sitting quietly, listen to the Irish group, The Corrs, covering REM’s hit “Everybody Hurts”.  This is from “The Corrs Unplugged”, one of the MTV Unplugged series, recorded live in October, 1999. A song appropriate to the last two weeks:

When your day is long
And the night,
The night is yours alone
When you’re sure you’ve had enough
Of this life
Well hang on
Don’t let yourself go
‘Cause everybody cries
And everybody hurts sometimes