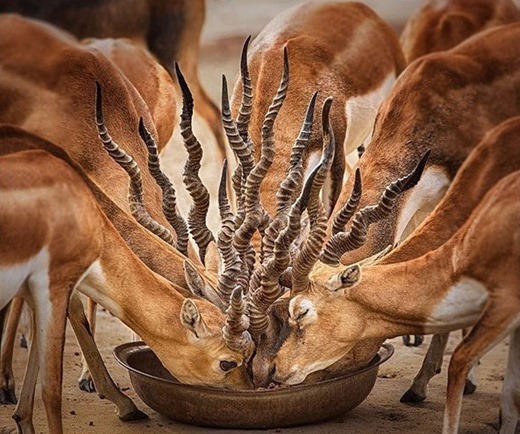 Impalas sharing a drink – Via

A few additional thoughts about the falling dominoes in Trump’s cabinet that were triggered by Tillerson’s firing. There are rumors that Gary Cohn will be replaced by Larry Kudlow, and that National Security Advisor HR McMaster may be replaced by John Bolton.

So, think about the new line-up. Kudlow is economic czar. CIA Director Pompeo becomes Secretary of State. Gina Haspel, who oversaw the secret CIA torture prisons in Thailand is promoted to Director of the CIA, and John Bolton turns up as National Security Advisor. These people, along with Nikki Haley at the UN, who this week threatened another cruise missile attack inside Syria, are among the worst possible choices for their respective jobs.

Unless we exhume and reinstate Dick Cheney and Donald Rumsfeld.

Wrongo had direct experience with Kudlow during the Reagan administration, when Kudlow was associate director for economics and planning in the Office of Management and Budget (OMB) under David Stockman. Wrongo was at the big NY bank, and was lobbying for approval of a new line of business that was a stretch under the Glass-Steagall regulations at the time. In our one meeting, Kudlow was a pompous asshat. He lectured us about “trickle-down” economics, and how the country was in the midst of a conservative cultural revolution led by St. Ronnie.

We couldn’t get away from him fast enough. BTW, we did get the exception to the regulations, without any help from Kudlow. Perhaps it is useful to remember that Kudlow has no training in economics, although he plays one on TV. Also, he was fired from Bear Stearns for his $100,000 per month cocaine habit. And that’s in 1994 dollars. Real economist Brad DeLong says appointing Kudlow is like appointing William Shatner commander of the 7th Fleet.

If all of these moves come to pass, Trump will be surrounded only by true believers. Any Generals that are left, except for Mattis at Defense, may act as if they are true believers, as well.

Think of these moves as the first step in a new neo-con takeover of our national security strategy:

Trump’s neocon cabinet now will have the means both to support Israel’s ambitions in the Middle East, as well as their own desire for Washington’s military hegemony in the world. They will use the “Russian threat” as a justification of more defense spending and even more militaristic actions abroad.

This is an extremely dangerous agenda. Russia’s new weapons as announced by Putin last week seem to suggest that they may have some military superiority over the US. Certainly, that may embolden China and Iran to move closer to the Russians.

If the administration persists in making charges and threats against Russia, Iran, and China, those nations must eventually react. They may become allied militarily, anticipating a possible war against the current US regime.

If, as Haley has threatened, the US were to again strike Syria, Russia has to choose whether to let it pass (as it did when Trump fired 50 cruise missiles previously), or to respond. If the US misjudges its attack, and Russia responds with actions that kill US military personnel, then the US regime faces the same choice, to let it pass, or not.

Any time we (or the Russians) are forced to consider retaliation, there is a clear cost to not retaliating, as well as a strong inclination to not just turn the other cheek.

Trump’s new cabinet line-up can lead us into a profoundly dangerous situation.

And it will be driven by a tiny minority: A neocon cabinet. Plus the Israelis who ardently desire the US to take on Iran. And elements of the US military/security complex, who feel we must be the biggest, baddest asshats in town.

We are sitting in the middle of the most reckless behavior in modern history.

Where are the voices against this?

Thesr appointees may not be believers in Trump but in an opportunity for th eir CV, ideology and ego. They probably won’t succeed either since he doesn’t know what he wants himself, except adoration.