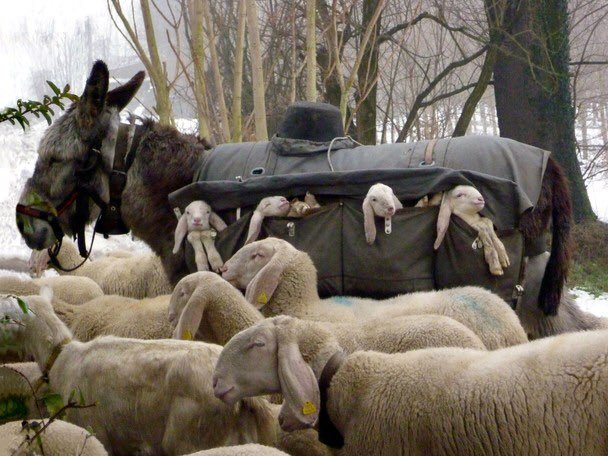 Lambs are carried by a donkey in a side-saddle carrier, moving to their summer feeding grounds, Lombardy Italy – 2018 photo by Elspeth Kinneir. Lamb riding on a donkey. A metaphor for how Conor Lamb was carried to victory in PA?

This week, at least, the Lamb carried the donkey in PA. The LA Times thinks that Conor Lamb’s victory is due to the failure of the GOP’s tax cuts to mean much on the ground in PA:

The most dangerous outcome for Republicans in Tuesday’s special House election was not the prospect of a Democrat taking over one of their seats. It was the shrugging off by voters of the party’s biggest legislative achievement: the tax cut measure that Republicans hoped would be their major campaign message as they head toward a turbulent midterm election.

Though the popularity of Trump’s tax plan has grown since it was passed last year, it stalled as an election issue in Pennsylvania, leading Republicans to shift away from it late in the campaign in search of another topic to energize supporters of state legislator Rick Saccone.

If Republicans can’t run on their $Trillion tax cut, they may be well and truly screwed. Some right wing outlets are saying that Lamb is really a Republican sheep in Democrat’s clothing, but that’s simply political spin. Let’s take a look at Lamb’s positions.

He took a few Republican positions:

He was a Democrat on others:

On abortion, Lamb was Obama-like: Personally opposed, but wants it to be safe and legal.

His positions resonated. Public Policy Polling’s exit polling indicated that health care was another top priority issue to voters in his district. And that voters believed Lamb’s views were more in step with theirs, saying Lamb better reflected their views by 7 points (45% to 38%) over Saccone. It didn’t hurt that voters in this heavily Republican district disapproved of the Republican efforts to repeal the Affordable Care Act by 14 points (53% to 39%).

Tax cuts were the Republican’s early message in the district, but Business Insider reports that ads mentioning the tax law by Saccone’s campaign dropped from nearly 70% of all messages in the first two weeks of February, to less than 1% by early March.

Wrongo disagrees. Each congressional district has its own issues that will energize its voters. What works in one will not necessarily work in all. Perhaps Conor Lamb’s strategy would work in borderline red districts, or in purple areas. But what may be a winning argument in PA wouldn’t work on the ground in LA.

National Democrats wisely chose to keep a largely low profile in this election, except for visits by Joe Biden, who many consider a local. The GOP did not stay away. Trump, Pence, and Donald Jr. all visited the district. Towards the end of campaigning, the GOP even tried saying that Lamb was “not one of us”.

That failed, because Lamb is clearly a local. His family is well-known. He’s part of a local Democratic dynasty. And after college and then the Marines, he came back to become a federal prosecutor.

When we think about broad messages that will resonate everywhere, it should be that Trump ran as a populist, driving what Nancy Tourneau has called “the politics of resentment”.

But Trump has governed just like any conventional conservative Republican.

That may explain why Democrats who were willing to roll the dice with him in 2016 didn’t respond to messages about the GOP’s tax cuts in the PA-18 election.

Maybe, people feel they gave Trump a chance, and now, they’re saying that they didn’t like the results.