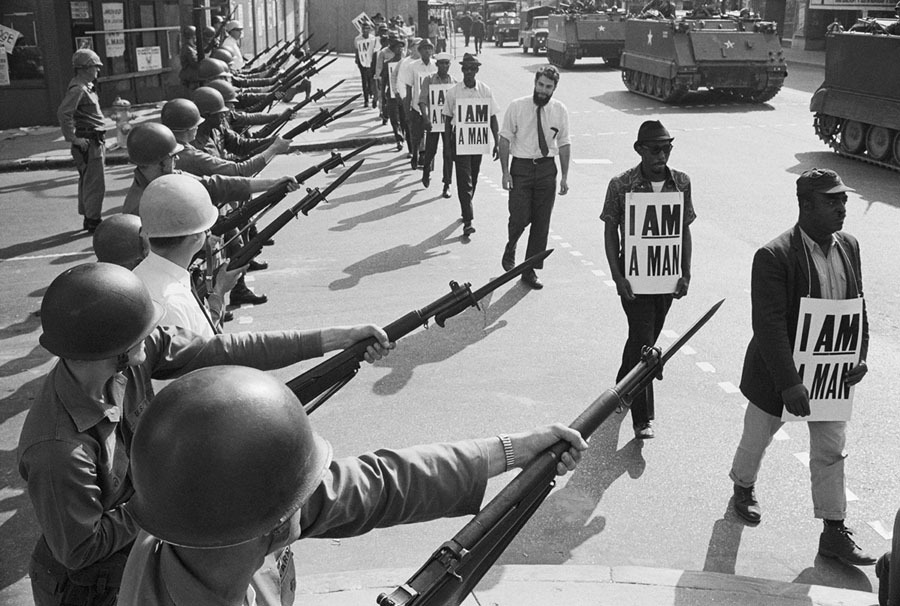 National Guard, March 29, 1968 during a strike supporting sanitation workers in Memphis, TN. MLK would be assassinated in Memphis on April 4th.

Today is the 50th anniversary of the assassination of Dr. Martin Luther King, Jr. in 1968. It was a signal event that for practical purposes, ended the era of 1960’s activism in the US.

Dr. King was an exemplar who reached all Americans with a peaceful, moral message that still resounds today. Wrongo is aware that many blog readers were not alive in 1968, and thus have no personal connection to a time when doing the right thing was still paramount in our society.

All of us, those who lived through the 1960s and those who did not, should stop today and look back on the events of 1968, and their meaning for today. On March 31, 1968, President Johnson announced that he would not run for another term. Despite all of his legislative achievements, including Medicare, Medicaid, the Civil Rights Act and the Voting Rights Acts, his undoing was the Vietnam War.

Two months later, Robert Kennedy too would be dead, assassinated like both his brother and Dr. King. Their murders dashed the hope that figures like King and the Kennedys had stirred in the American people earlier in the decade. In August, anti-war riots also had a large impact at the Democrat’s national convention in Chicago.

The riots showed the frustration and fury felt by many African-Americans who lived in poor housing with minimal opportunities, thanks to institutional racism and discriminatory government policies. For others, however, the riots reinforced the sense that the country was spinning out of control and that only a heavy hand with rioters and criminals would restore peace and keep our prosperity.

This dichotomy continues to shape our politics today.

In November ‘68, Richard Nixon was elected by 512,000 votes over Hubert Humphrey. He would continue the war, and later resign over Watergate.

The assassinations and the riots, combined with the lack of trust caused by the Vietnam War and Watergate eroded Americans’ faith in government. Without trust in government, America moved in many different directions. And voters eventually soured on liberal activist policies for more than a generation.

According to Lenny Steinhorn, a historian at American University who has studied the 1960s:

1968 was the perfect storm that crystallized the differences in society. The Tet offensive drove home the un-winnability of the war, and the assassinations drove home the despair…. All these clouds that were gathering became an electrical storm…. What was clear was how we were divided and this played out for the next 50 years.

It was a terrible year. I think it was the worst year for American society since the Civil War. It was a combination of race, gender and Vietnam that was a lethal cocktail…. We were in even worse shape than we are now. We were divided about things that are more fundamental than we are now. It felt like the country was coming apart at the seams, the fabric pulling apart. But we got through it.

1968 illustrated how change can arrive suddenly and fundamentally, even in America. And many Americans see 2018 shaping up as another 1968.

We are as polarized as we were then, and this time it’s also along ideological and partisan lines. Deadly violence is again regularly erupting, this time in the form of mass shootings such as the massacres in Las Vegas, Orlando, San Bernardino and Parkland. And we saw ideological violence in Charlottesville.

Our political system is under attack again, led by President Trump and his followers who believe in disrupting the status quo, without a coherent thought about what should replace it.

If the decade of the 1960’s marked an American apogee of sorts, will the 2020’s mark its perigee? We have not faced this particular set of circumstances before, so we can’t know just now, but it is likely we may know soon.

One bright spot is the return of teenagers to activism. We have had many marches over the 50 years since 1968, but few have felt as if they would deliver political change. The Parkland activists, joined by teens all across America are media-savvy. They use different tools, and seem to be more than a flash in the pan. So maybe, the mass movement-type of activism will make a comeback.

Parkland’s student leaders have accomplished something, but we’ll have to see if it delivers results in the voting booth.

MLK remains the hero of a generation of Americans for whom activism was a building block of their personal journey to adulthood. In most ways, our nation has never recovered that sense of can-do, or that achieving your Big Idea remains possible.

Can we get it back?