(Wrongo is taking off for the rest of the week. So unless SHTF, the next post will be a Wake-Up Call on Tuesday after Labor Day. We all need a break, and late August is usually pretty slow as far as news goes. Try to enjoy the heat wave, or whatever your weather brings.) 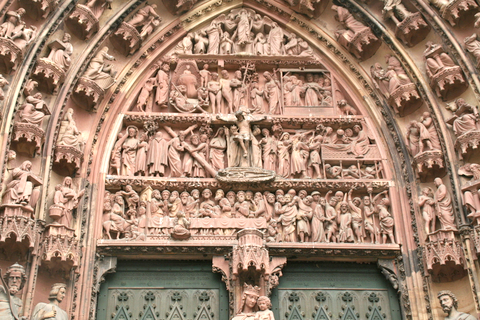 Detail from above the doors of Strasbourg Cathedral, Strasbourg, FR – 2008 photo by Wrongo. Strasbourg is one of Wrongo’s favorite European cities.

Remember the dog in the movie “Up” who was constantly distracted, yelling “Squirrel!”, all the time? That’s the media when Trump tweets.

When he was first elected, we had the daily squirrel. Now we’ve achieved hourly squirrel. The WaPo reports that:

Early on Tuesday morning, President Trump accused Google of rigging search results for “Trump News” against “Republican/Conservative & Fair Media,” and wondered, “Illegal?” Then, he promised that the situation would be “addressed.”

This is today’s Conservatism in action: A constant search for new conspiracy theories to advance their agenda of victimhood. Trump was repeating a claim that first appeared in the conservative news site, PJ Media, which published a piece with the headline, “96% of Google Search Results for ‘Trump’ News Are from Liberal Media Outlets.”

Google, naturally, denied Trump’s accusation. According to Google, the rankings are supposed “to promote original journalism, as well as to expose users to diverse perspectives.”

Google News results are ranked on a variety of factors, and the results are personalized to an extent. Many factors contribute to their results, including the “freshness” of content, and the extent to which it contains original reporting, as opposed to commentary on the news.

Wrongo’s experience with Google shows that they constantly down rank sites by changing their algorithms.  Last year, there was a big dust-up when Google changed its algorithms to promote main stream media and demote independent outlets. “Deemed to be leftie” sites like the Wrongologist have taken traffic hits due to Google’s downgrading non-MSM sites in their search rankings.

Facebook has a partnership with the Atlantic Council to help FB work on deleting what they call “inauthentic content”. The Atlantic Council is a NATO-backed think tank. Its board includes people like Henry Kissinger, Michael Morrell, the former acting CIA Director, and Gen. Michael Hayden. It is funded by the UAE, the Abu Dhabi National Oil Corporation, Chevron, and a long list of other corporations.

If you use Facebook, do you really want this cast of characters controlling what you see, or do not see? Do you trust them with creating your news feed?

But it could mean much more than that. No one is sure what methodology FB is using. And that could have serious First Amendment implications.

There is a lot here to argue about on both the right and the left. We’ve tumbled to the fact that in the US, companies can do much more than the government regarding censorship. Is this a strength or a weakness?

The First Amendment was originally an Anti-federalist addition to the Constitution designed to contain federal power, giving an equal chance to citizens to organize and publicize resistance to an autocratic regime.

The big question: Is the Atlantic Council/Facebook agreement a permitted form of private/government censorship? Is it a way to circumvent the First Amendment?

After all, these are private sector organizations. They can take any political perspective they want, just like FoxNews, and its parent, the News Corporation do every day. Since Citizens United, we call that the right of a corporation to Constitutionally-protected free speech.

There’s an ongoing petition at White House.gov to replace Facebook, Google, and Twitter’s “community standards” with First Amendment protections. No worries, nothing will come of that.

One way to look at this is: If you don’t like Google because you think it’s “biased”, then don’t use it. And if Trump and his fellow travelers what a search engine that always places them first, why don’t they simply build one, and see if the “market” makes it a success?

At the end of the day, the important question is how to ensure that the public cannot be forced by both private as well as public interests to find and read information from only a short list of approved providers.