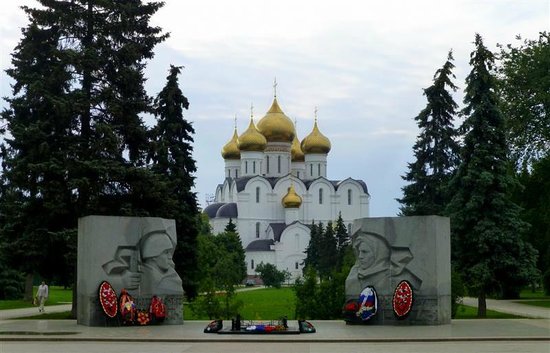 The Assumption Cathedral, Yaroslavl, RU. Originally built in 1210, it was  blown up by the Soviets in 1937 as part of their anti-religion policy. This new cathedral was constructed in 2010 on the same spot. In front is an eternal flame memorializing the soldiers and the workers of WWII.

Wrongo and Ms. Right spent the day in Yaroslavl, Russia. It’s a mid-sized town of about 600k residents, and an important port on the Volga River. The Volga is more than 2,000 miles long, tying the western Russian cities together. Yaroslavl is an ancient city, founded in 1010.

In Yaroslavl, we learned two interesting facts about Russian towns. Any town of size has a fortress that includes a church. In Russia, that space is called a “Kremlin”. Second, despite the collapse of the the Soviet Union, statues of the heroes of the revolution were not taken down. The idea is that young people should understand their history, both the good and the bad. Major streets have kept their revolutionary names as well.

Maybe there is a lesson in that for America.

In visiting both tiny towns and large cities, it quickly becomes evident that the peoples of Russia have suffered immensely over the centuries. They endured long periods of starvation, and their losses in blood and treasure at the hands of both their enemies and their rulers were truly extraordinary:

If history teaches us just one thing about Russia, it is that its people know suffering. They have survived, and in Wrongo’s brief visit, appear to have thrived. Stores are full of product, markets are busy with the purchase of fresh vegetables, meats and fish. New cars are on the streets, theaters are open, and everything looks very clean.

How have a people who have endured so much suffering, succeeded in the modern world? How were they not irretrievably damaged by their multiple tragedies?

How are they so resilient?

Perhaps their legendary winters forge a determination to do whatever is necessary to survive a long, hard fight with limited resources. Perhaps Russia’s long history of invasion and occupation by hostile powers has played a role: Russians have been invaded by the Mongols, the Turks, the Poles, the Swedes, the Germans and the French. Their story is ultimately one of resilience despite tremendous loss of life, repeated destruction of infrastructure, and against long odds.

Another thing is that the people seem to have a profound and deep feeling for their homeland, Mother Russia. That seems to be true, regardless of who is in control in the Kremlin, or which Tsar was in charge at the time.

So they fought and died for the motherland, regardless of who was leading them.

Compare that with America’s resilience. How resilient are we, in the 21st Century? We have never faced invasion, but we have faced attack. On our homeland, we fought a seven-year revolution, and a bloody civil war. We’ve faced natural disasters.

After 9/11, we overreacted to the threat of Islamic extremists by weakening our First Amendment rights with the Patriot Act. We launched wars in Afghanistan and Iraq. But, we didn’t come together as a nation. In fact, 9/11 threw gasoline on the fire of America’s already factionalized politics.

When Japan attacked us at Pearl Harbor in 1941, we came together as a people. There were a few who said we shouldn’t go to war, but the vast majority of our people got behind a global war against fascism. We sent our fathers, brothers and husbands off to war. Women worked in the factories for the war effort. Some were on the front lines with the troops. We rationed butter and sugar.

Our people knew hardship, and pulled together in common cause.

The question is: Will today’s America still pull together in common cause? Do we have the strength of character, the grit, to fight for something larger than ourselves? Could we again sacrifice for what we believe to be the right thing?

Our response to the Great Recession of 2008 showed us that in an American financial crisis, it’s every person for themselves, unless that citizen happens to be a financial institution.

When you think about it, do you still love Lady Liberty enough to fight for her?

To send your kids to fight for her?

And, do you think that we love her as much as Russians seem to love Mother Russia?