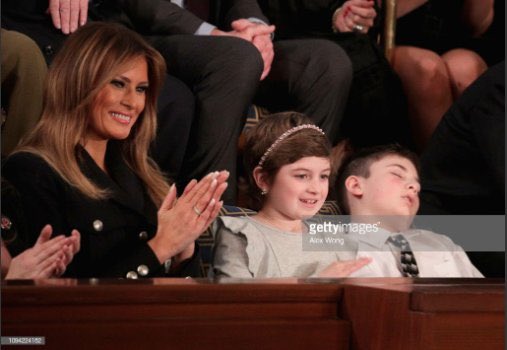 The sleeping kid is Joshua Trump. He was bullied for sharing the same last name as, you know. The kid is one Trump who has already mastered “Executive Time”.

Young Trump kinda sums up the SOTU, along with this: 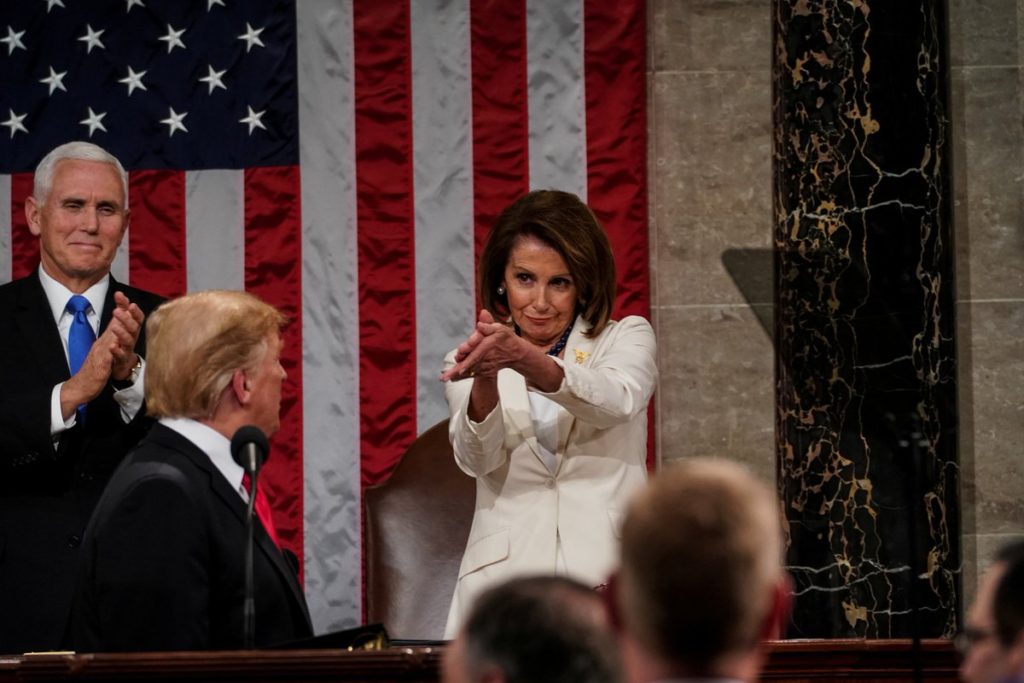 Wrongo thinks the best part of the 1 ½ hour Trumpshow were the shout outs to people in the audience. They took up about 1/3 of the time, and provided some interest, even if most were ham-handed efforts to represent administration policy. These introductions of citizens in the SOTU audience have been around since Ronald Reagan in 1982, and usually give us a bit of a break from the eternal SOTU spewing.

Other than that? Vox makes a good point:

“There were two truly well-done sections of the speech. One was the troll of the Democrats present around the divisive term ‘socialism.’ The other was a series of moments on the stories of Holocaust survivors and World War II veterans.”

Most of the speech was either recycled campaign themes from 2016, or possible 2020 themes being screen-tested for the Republican faithful. Republicans in the room were very happy to see that Dems wouldn’t clap for the war on abortion, or for Trump’s pledge that America would never be a socialist country.

Wrongo thought that Trump’s review of the economy was effective. It is surprising that he doesn’t reference America’s late-stage economic recovery from the Great Recession more often. That, along with abortion, marauding immigrants, and socialism are setting the stage for what we can expect from Republicans over the next two years.

Why did Trump threaten Democrats about investigations? He said:

“If there is going to be peace and legislation, there cannot be war and investigation. It just doesn’t work that way!”

He’s saying that he will obstruct legislation unless Democrats stand down on investigating him. Fat chance. He also said this:

“An economic miracle is taking place in the United States — and the only thing that can stop it are foolish wars, politics, or ridiculous partisan investigations…”

Nobody should threaten America’s economy for personal reasons. That prompted some boos from Democrats. Even Republicans greeted Trump’s threat to economy with near-silence. And the GOP weren’t totally craven yes boys for Trump elsewhere in the speech. The part about trade was poorly received by GOP members. The part about pulling troops out of Afghanistan and Syria was also met with near-silence.

Nancy Pelosi said afterwards that even though Trump spoke of the honor of being in the House chamber to deliver the State of the Union:

“He threatened the United States Congress not to exercise its constitutional responsibility of oversight.”

The SOTU was as boring as Sunday’s Super Bowl, but without the uncertainty of knowing who would win or lose.

Even before Trump opened his mouth at the SOTU, it was clear that America would be the loser.

I have listened to many SOTU speeches. Even Bush II would give an accurate outline for his program – and he had one. I did not listen to or watch the speech this year – I was right. It was irrelevant.