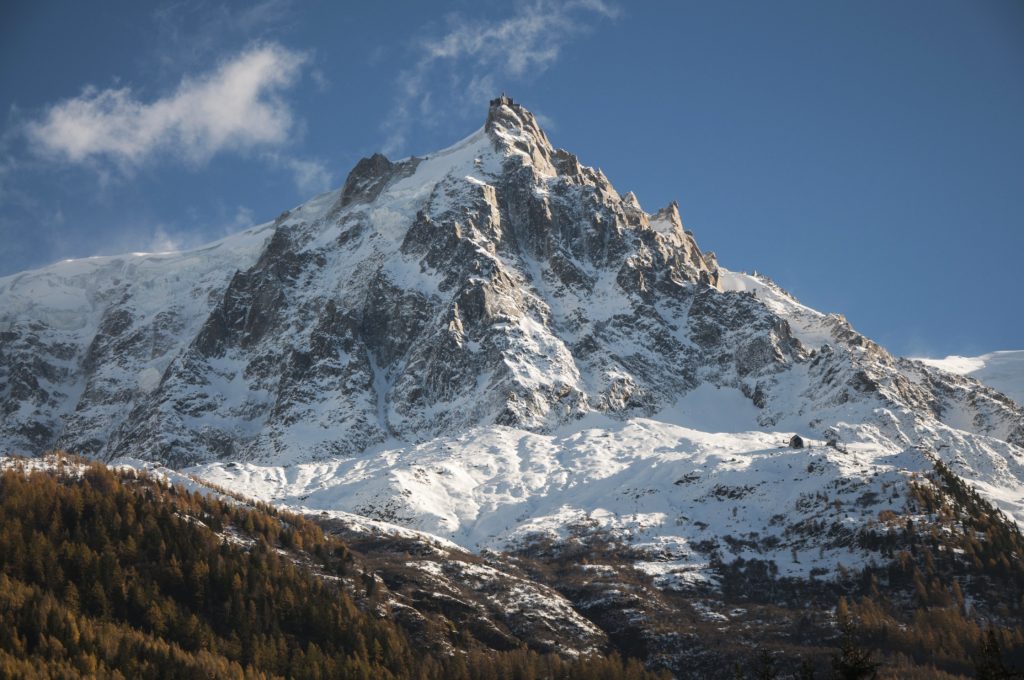 Aiguille du Midi – 2019 photo by Berenicids. The Aiguille du Midi (12,605 ft.) is part of the Mont Blanc massif in the French Alps. It can be directly accessed by cable car from Chamonix. If you enlarge the picture, the cable car building is visible at the very top of the mountain.

The end of Wrongo’s favorite sport, the college basketball season, happens on Monday. Tonight is the Final Four, the Wrong family’s equivalent of the Super Bowl, with family gathering for food and drink around the TV.

But, that doesn’t start until the early evening, so we’ve got time to talk about another scary piece of news this week: There will be severe human impacts caused by the next wave of automation. The bottom line is that plenty of jobs will be lost and we’ll see societal disruption as machines and robots take over American jobs. Axios takes it from there:

“In a new report, the Aspen Institute nudges policymakers away from any notion that the American economy will naturally adjust as robots are introduced at an accelerated pace over the coming two and three decades.”

Axios goes on to quote Aspen’s Alistair Fitzpayne who says that, workers displaced in prior technological cycles “have experienced profound downward mobility” in new jobs at much lower pay and benefits.

The report’s executive summary warns, “Artificial intelligence and other new technologies may lead to deeper, faster, broader, and more disruptive automation”, and retraining programs may be unable to mitigate the downward trend in earnings and social status. Aspen warns that fewer jobs may be created than are destroyed:

Axios reports that Aspen tries to pull the punch, saying that with the right policy choices, we can choose to create an economy that works for everybody. That we can encourage employers to adopt a more “human-centric approach” to delivering the bottom line. That we can support displaced workers through retraining, reemployment services, and unemployment insurance to help them transition to new jobs and careers.

Maybe, but it seems questionable that those things will spontaneously happen. Rep. Alexandria Ocasio-Cortez (D-NY) suggests all this new technology might be liberating, but she has reservations:

“The reason we’re not excited by it is because we live in a society where if you don’t have a job, you are left to die. And that is, at its core, our problem.”

The cultural stigma attached to job loss is profound, and that is unlikely to change by adding more retraining programs. Conservatives are not about to celebrate jobless people having more time to learn, to create art, or enjoy the world they live in, as long as they are unemployed.

The merciless mantra of shareholder value above all, and our corporate masters’ acceptance of the inevitability of technological change means that low and moderate-skill workers are expendable. Efficiency for more bottom line is more important than the lives of human workers.

This coming automation disruption is hard to see now. But estimates are that it will impact as many as 40% of American workers.

The 21st Century American corporation isn’t our friend, as currently constituted and rewarded. It is the enemy of our society, because they are quietly working to eliminate our jobs. We constantly reduce their taxes, vainly hoping for them to create more jobs. We look the other way when they pollute our environment. We allow them to disproportionately finance our elections.

It’s time for a new Capitalism.

But you’ve had enough for this week, so on to the Saturday Soother. Start slowly, particularly if you plan to stay up until the last Final Four game ends at around midnight. Let’s brew up a cup of New Hampshire’s Flight Coffee’s single origin Tanzania Tarime AB, ($17/12oz.), with its floral fragrance and intensely sweet flavor. Now settle into your favorite chair and listen to “Spring Morning” by Frederick Delius, played by the Royal Scottish National Orchestra and conducted by David Lloyd Jones. “Spring Morning” is the third of ‘Three Small Tone Poems’ by Delius: