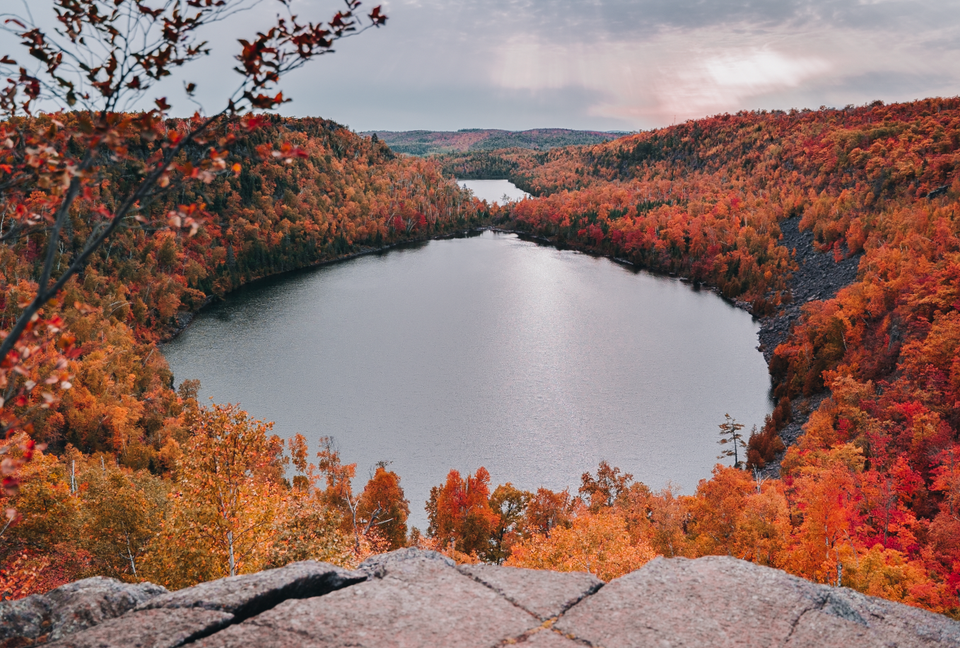 Maybe you saw this announcement from the White House on Sunday night saying the US was pulling back from where it was patrolling in northeast Syria, allowing the Turks to move deeper into Syrian territory: 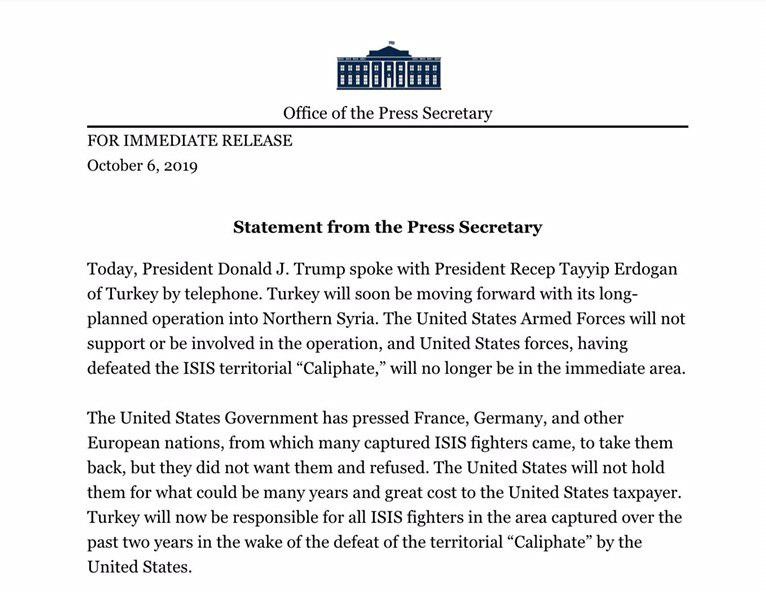 Then, the AP reported on Monday that US troops had already begun pulling out of positions in northern Syria. Here’s what the situation on the ground looks like: 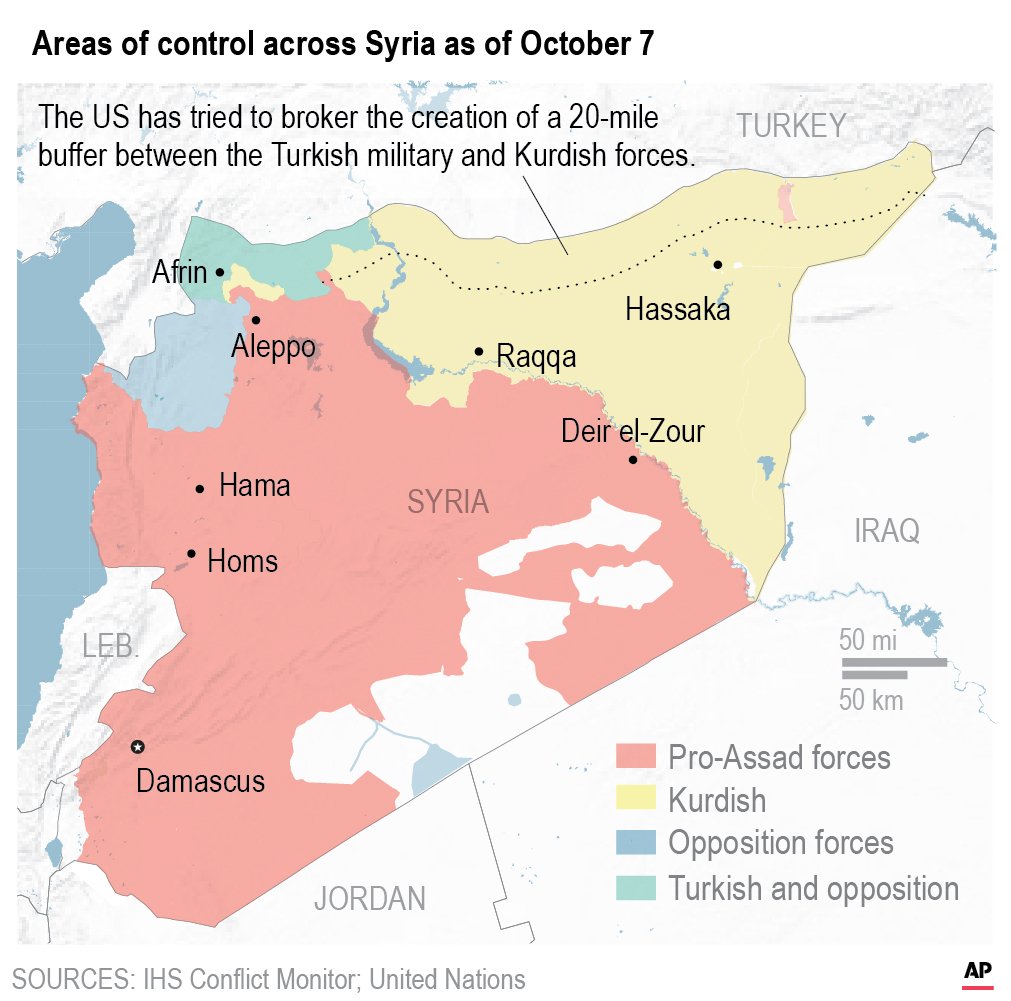 In agreeing with Turkey’s desire to further intervene in Syria, Trump overrode the objections of the Pentagon and State Department, which wanted to maintain a small American troop presence in northeastern Syria. Our presence provides a buffer between the Kurds and Turkey, which considers the Kurds to be terrorists.

Trump’s decision came after a telephone call with Turkey’s President Erdogan. The Kurdish forces in the area have been the most reliable American ally against ISIS for years, but Turkey has continually lobbied the US to stop supporting them.

Trump wanted to leave Syria in 2017, at the beginning of his term, but was talked out of it. Had he carried through on that, the Kurds would have had an incentive to make peace with Syria. It would have left Russia, Iran and Syria in a better position to fight the remaining jihadis, while holding the Turks at bay.

The Kurds should have seen this coming. America has not been the Kurds best friend, despite their assisting us since before the Iraq war. Remember that we had no response when Saddam used chemical weapons against them in the 1980s.

Trump plans on keeping the troops in Syria, just out of the reach of the coming Turkish invasion. It’s the worst of all worlds for everyone, except Erdogan.

The move didn’t go over well with Republicans. Many have castigated Trump, and some are promising to try to sanction Turkey if it follows through with its plans. In a kind of retreat, Trump backed down a little with this tweet: 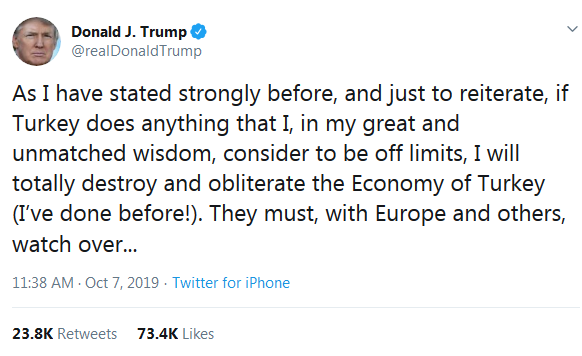 Any non-Republican reading this tweet will have the same thought as Wrongo, that Trump’s account was hijacked, or that this was satire. No, it was really Trump, and he wasn’t joking. His “great and unmatched wisdom” stands between us and “obliterating” a NATO partner.

And he says he’s done it before. Does he mean the Iranian economy? China’s?

Wrongo hears echoes of The Wonderful Wizard of Oz. Unlike in “The Wizard of Oz”, the booming, threatening voice of grandiose delusion now comes from a Twitter account. And this story won’t end with Dorothy waking from a dream.

So far, the GOP in DC has not reacted to the tweet, they’re still focused on what they think is a bad decision: walking away from the Kurds. They think Trump is rewarding another dictator in Erdogan. He has defied the US by purchasing Russia’s S-400 air-defense system and by ignoring US sanctions against Iran.

But Trump seems ok with all that, so long as Erdogan takes 2,500 foreign fighters off our hands.

So far, the Republicans are pissed about Trump doing something that is within his right to do as president. But, when he broke the law by asking foreign countries to interfere in our election, they have stayed silent.

So, Trump jeopardizing their Defense Industry PAC contributions is a grave national concern, but law-breaking is OK by them.

Who sets their priorities?

Disregarding the issue of policy, it sure does look like the president is cracking under the pressure.