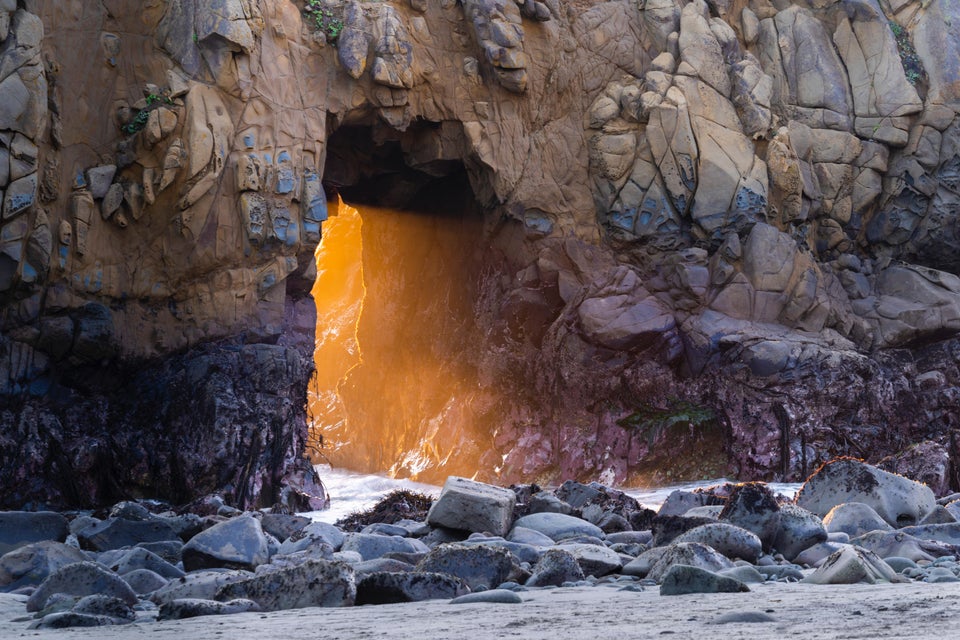 Keyhole Arch, Pfeiffer Beach, Big Sur, CA – 2020 photo by jtmess. For a few weeks every winter, starting with the Winter Solstice, sunset lines up with the hole in Keyhole Arch.

Someone told Adlai Stevenson when he was running for president in 1952 (or ‘56): “Every thinking person in America will be voting for you.” Stevenson replied, “I’m afraid that won’t do—I need a majority.” (Via)

It’s time that Americans recognize that the most important global event in 2020 will be the US presidential election. The reason is blindingly obvious. It’s questionable if the world can be brought back from four more years of Donald Trump. That’s doubly true for the US. That means historic voter turn-out is required.

And if that’s the case, it’s important that the best person challenge Trump in November. Last night’s debate didn’t move us any closer to knowing who that should be. This, from Deborah Long is a useful take:

Three Democratic candidates for president walk into a bar.

The first one says, “I’m going to beat Donald Trump by re-starting the Bolshevik Revolution”.

The second one says, “I’m going to beat Donald Trump by breaking up the big banks and sticking it to the man.”

The third one says, “I’ll be in my trailer. Call me on the horn when they’re ready for my cameo in ‘The Way We Were’.

Her underlying point is that the current Democratic candidates show no unifying message. That partly explains why the top four are polling at close to the same numbers. Democrats need to answer the question: Who can deliver a knockout punch to Donald Trump, and repudiate what the Republican Party currently stands for?

Wrongo posted about Economic Dignity last spring. It’s from an article by Gene Sperling, Obama’s Director of the National Economic Council. His take is that the Fed and Congress should implement a full employment monetary and fiscal policy that enables tight labor markets.

Sperling says that implementing the idea of economic dignity would lead to higher wages, and give employers greater incentive to provide advanced training to their employees. And, high demand for labor would give more workers more of the “take this job and shove it” leverage that’s lacking today.

We’ll need more: America needs a return to what Paul Collier calls the “cornerstones of belonging”— family, workplace, and nation, all of which are threatened by today’s market-driven capitalism.

That’s a unifying message for Dems. Hidden behind that message is the idea that America has to return to the ethics of the New Deal. Joseph Stiglitz, Nobel laureate in economics, says: (parenthesis and emphasis by Wrongo)

“Over the past half-century, Chicago School economists, (including Milton Friedman) acting on the assumption that markets are generally competitive, narrowed the focus of competition policy solely to economic efficiency, rather than broader concerns about power and inequality. The irony is that this assumption became dominant in policymaking circles just when economists were beginning to reveal its flaws.”

The unifying message is that Democrats will provide Americans with a legal and political framework that allows people to provide better opportunity for their families.

Better opportunity is something all of America wants to believe in.

So, if the Democrats want to win big enough to silence the GOP, the 2020 Democratic Party nominee for president must excite Americans by showing them a path to a better future for their families. Emphasis on the “excite”.

Not by continuing the tiresome, wonkish recitation of “my policy is slightly better than yours”.