Great Wave off Kanagawa – Japanese woodblock print by Hokusai c. 1829. The wave could represent a tsunami of COVID-19 cases, or could it represent the rising of malign intent by Trump towards our democracy? 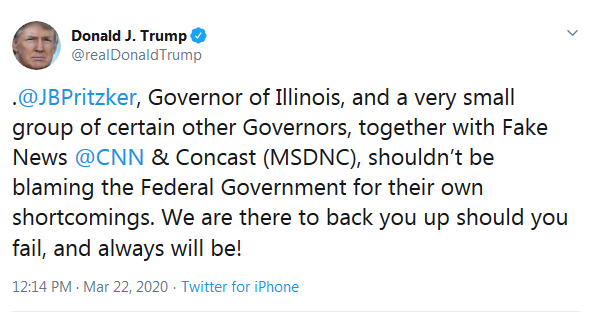 He says it’s not the federal government’s job to lead in a national emergency. As Haberman and Baker said in the NYT: (emphasis by Wrongo)

“For years, skeptics expressed concern about how he would handle a genuine crisis threatening the nation, and now they know.”

Any other president, even the weakest, would have acted differently. Despite the fact that his policies are generally pretty standard right-wing Republican, Trump has managed to make a national disaster worse than it had to be.

Now all Americans should know how it feels to be Puerto Rican.

Bloomberg reports that Trump’s directive for governors to buy their own medical supplies to fight the coronavirus ran into a big problem when the federal government outbid them for the products! Earlier that day, Trump said that his administration is not a “shipping clerk” for medical gear that the states require to fight the virus.

Another example from the NYT: (emphasis and brackets by Wrongo)

“…on Saturday {Trump] sought to assure an anxious American public that help was on the way…and that private companies had agreed to provide desperately needed medical supplies to fight the fast-spreading coronavirus.

But Mr. Trump [said] he would not compel companies to make face masks and other gear to protect front-line health workers from the virus….. Mr. Trump said the clothing company Hanes was among those that had been enlisted to start churning out masks, although the company said they would not be the N-95 masks that are most effective in protecting medical workers.”

Trump could simply order companies like Hanes to make them, but instead, Hanes is making masks that don’t actually protect medical personnel. Capitalism @ work!  At a time of national emergency, Trump is letting the market do it, and simply declaring victory.

Another: In the on-going (Sunday) negotiations on the Coronavirus bail-out package, it turns out that Treasury Secretary Mnuchin and the White House are demanding that the relief package include $500 billion to be provided to corporations at the discretion of Treasury Secretary Steve Mnuchin.

The best part is that it permits the Treasury secretary to withhold the names of corporate recipients for up to six months. How is it possible to use taxpayer money for corporate bailouts and demand that taxpayers can’t know who’s received the funds?

Finally, here’s an example where Trump is unhappily, showing leadership. He wants to suspend habeas corpus, the Constitutional right to appear before a judge after arrest, and seek release:

“The Justice Department has quietly asked Congress for the ability to ask chief judges to detain people indefinitely without trial during emergencies — part of a push for new powers that comes as the coronavirus spreads through the US.”

The DOJ is looking for broad authority, including the ability to ask chief judges to detain people and to pause court proceedings during emergencies. It would apply to:

“any statutes or rules of procedure otherwise affecting pre-arrest, post-arrest, pre-trial, trial, and post-trial procedures in criminal and juvenile proceedings and all civil process and proceedings,”

This means you could be arrested and not brought before a judge until they decide that the emergency or the civil disobedience is over. Shouldn’t we be even more careful about granting new powers to the government if we’re in a national emergency?

We can hope that the House will block this nonsense.

We should remember that the US government was founded for the very purpose of solving some rather serious problems that the individual states couldn’t handle. That role of federal leadership has worked for 230+ years, but that doesn’t work for Trump.

You should be asking why.

It seems certain that at some point, Trump will say that the states were unable to solve the virus emergency, so he’s stepping in. He’ll try to use COVID-19 to assume extraordinary emergency powers between now and the election. That’s beyond frightening.

More will die because Trump won’t lead in the fight to contain the Coronavirus. And in the background, he’s busy laying the groundwork for emergency powers.

It’s time to ask, what are the DC Democrats doing to block all of this?