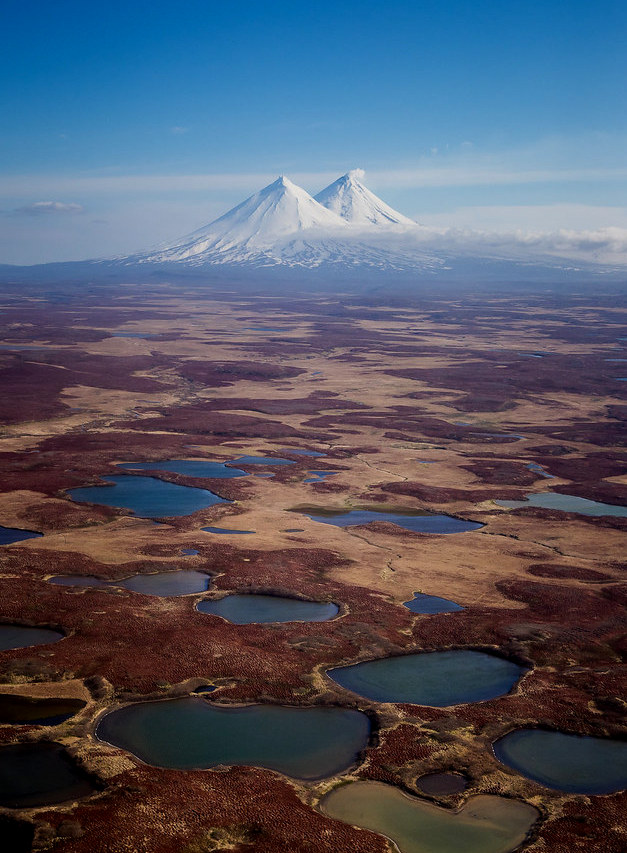 Mt. Pavlov and Pavlov’s sister, the Aleutians, AK – Pavlov is the most active volcano in the US. Hat tip: Ottho H.

We’re crossing a threshold between what we knew about public health, toward an unseen future. There’s no certainty about what that future will look like. As important as it is to remove Trump, his incompetence has made his removal our second national priority. He’s made beating the Coronavirus our number one priority.

This has a domino effect: We don’t just have a national health emergency, but soon, a recession. So many things cancelled. So much commerce deferred, and for how long? Think about how many working people are/will be out of work due to postponements and cancellations, due to small companies closing. Due to illness of family and deaths of loved ones.

Widespread illness is showing the cracks in our health care delivery system: In early January, America was among the best-prepared nations for an epidemic. Our large number of ICU beds, plus our stockpiles of drugs and medical equipment, made us the envy of many nations.

And we took an early lead: On January 6, the CDC issued a Level 1 travel watch for China. On January 7, the CDC established a 2019-nCoV Incident Management group. On January 8, the CDC began alerting clinicians to watch for patients with respiratory symptoms and a history of travel to Wuhan. On January 17, the CDC issued an updated interim Health Alert Notice (HAN) Advisory to inform state and local health departments and health care providers about this outbreak. We began screening passengers on flights from Wuhan to five major US airports.

On January 31, Trump announced blocking of entry of Chinese nationals and mandatory quarantines on US citizens who returned from affected parts of China.

Since then, we’ve had inaction and mistakes by the FDA and CDC, including screwing up the provision of desperately needed tests. Even now the CDC and FDA say there’s an inadequate supply of reagents used in the tests, a bottleneck that should have been dealt with in January.

Organizations require strong leadership. That allows established process and procedures to rule in an emergency. That’s why we need good elected leaders in charge of the experts. Today, it’s the other way around. This is inexcusable.

Here’s a thought about one of the detestable people who helped bring us to this new threshold between where we were, and where we’re going: Sen. Susan Collins (R-ME). In 2009, she singlehandedly removed $870 million in pandemic funding from the economic stimulus package: 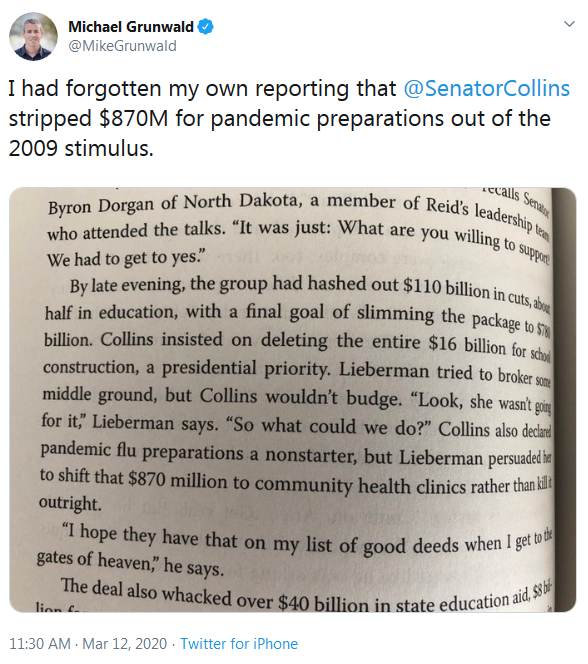 “Collins also deleted the pandemic flu preparations as a nonstarter”

Finally, haven’t we had enough of the lying and purposeful misinformation spewed by Trump? Eric Boehlert has a great idea: The media and the rest of us should stop listening to Trump:

His forum should be restricted to only FOX news. There is no reason to have presidential debates, since no fact-checking organization, much less any citizen, can keep up with Trump’s lies and misstatements. Sure, the GOP will complain that Biden (or Sanders) are chickens, that they’re too old to match wits with Trump. But the truth is, Trump should be denied a forum when and wherever possible.

He hasn’t earned being normalized by the rest of us. And don’t say we should respect the office – he doesn’t.

We need only one point to prove this: Trump did not push to do aggressive Coronavirus testing because more testing might have led to more Coronavirus cases being discovered. Trump made it clear the lower the numbers on Coronavirus, the better for him and his re-election this fall.

Here’s a little tune to help you through the weekend. It’s “Enjoy Yourself (it’s later than you think)” by Jools Holland, The Specials, Hozier, Rhiannon Giddens and others performed in 2015:

And it IS later than you think! Those who read the Wrongologist in email can view the video here.