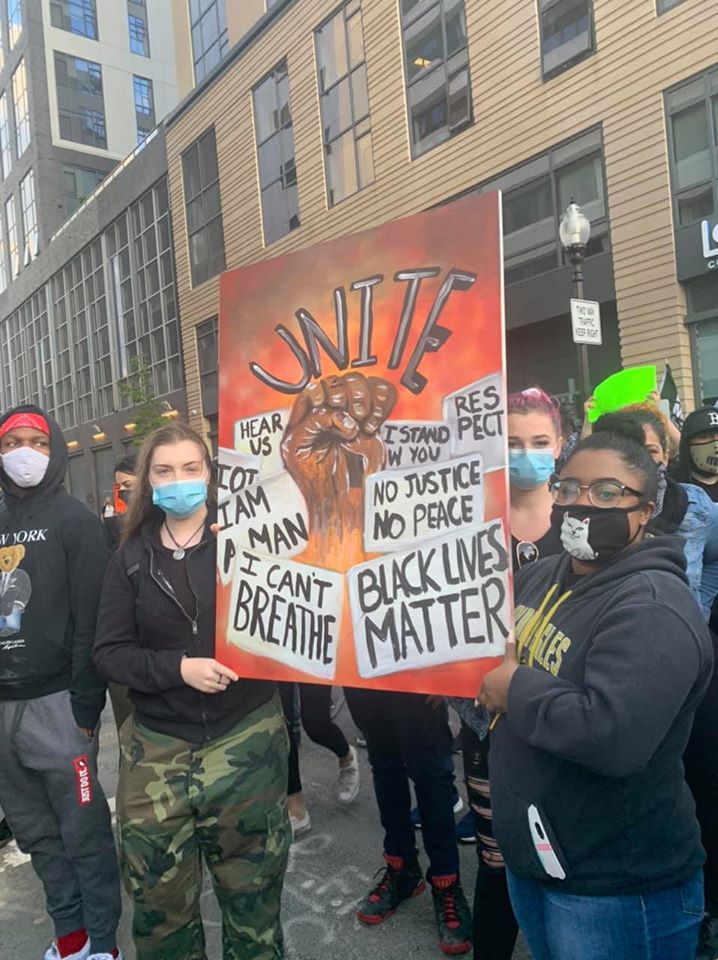 (What follows is a first person report by friend of the blog, Kendall Lavoie. She, her fiancé and a few friends drove from western Massachusetts to show support for George Floyd at a demonstration in Boston.)

Eight years ago, when Trayvon Martin was murdered, my eyes were opened to how cruel and unjust the world can be for people of color, especially in this country. Every year since then there have been multiple instances of unpunished police brutality, many lives lost, and still no progress or real change.

When I saw the video of George Floyd being killed in the street I was filled with sadness, anger, and a drive to do something.

Yesterday, we haphazardly constructed signs that we decorated with our slices of free speech, gathered medical supplies, and headed to Boston to join our fellow citizens in need. We wore PPE and tried our best to socially distance, which is difficult in a crowd, and we will be self-quarantining for 14 days as a result of the contact we made yesterday. 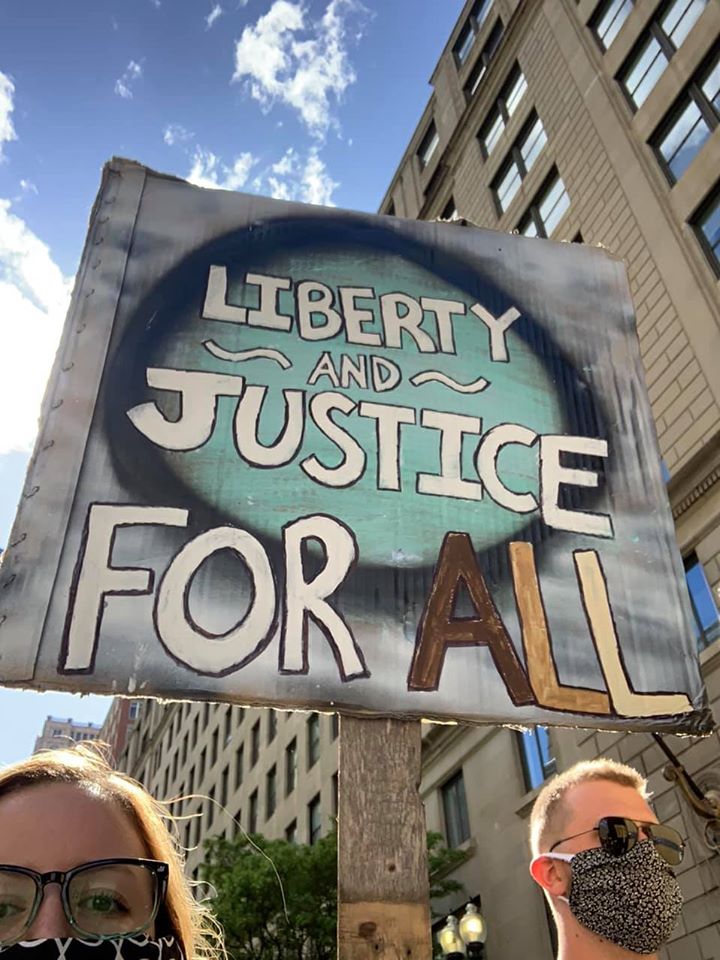 When we arrived in Boston, we first joined an early march along the streets to the Boston Common. We listened to people talk about how they felt while we knelt in the gravel and grass. Some quotes from the early march include:

“Don’t let this moment be fleeting. You gotta live this shit as a lifestyle.”
“Why is my color a crime?”
“This is a movement of us, all of us.”
“True allies that are out here today willing to put their health on the line, that’s what makes this different- everybody had to take a risk to be the fuck out here today.” 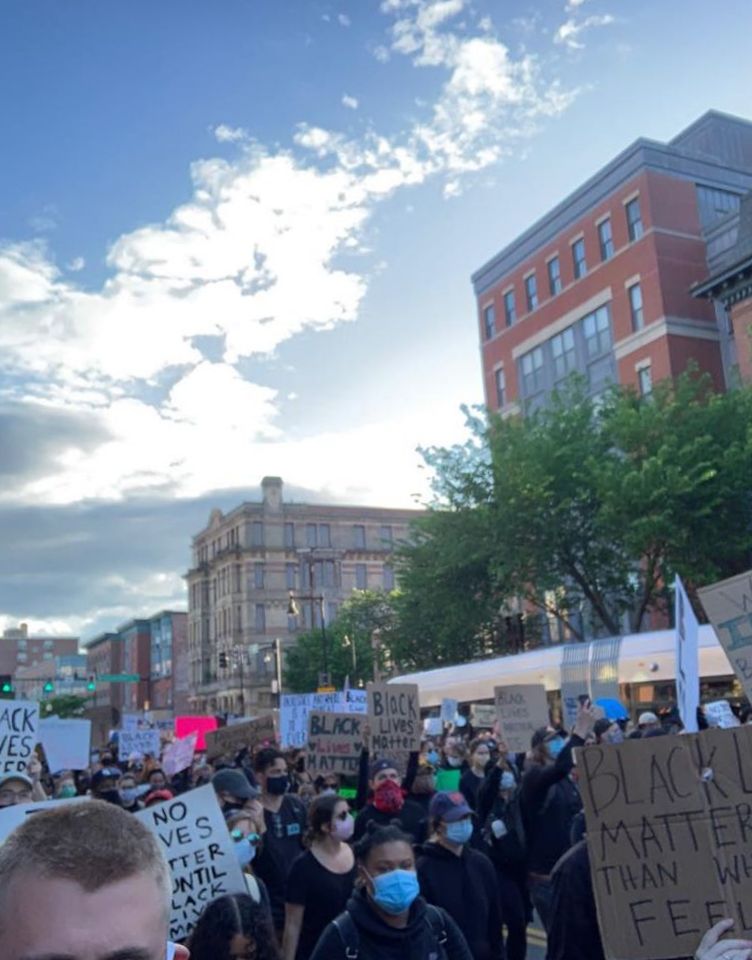 We marched to the State House and peacefully stood outside for a bit, and then dispersed and went our separate ways.

The late march started at 6:30 in Dudley Square. The amount of people who showed up was just incredible- almost the entire time I couldn’t see the front of the crowd or the end of it. Community support from residents and businesses was amazing throughout, motorists showed their support despite being blocked by our marching at times, and there was a real sense of people coming together for change.

We marched toward the Common once again for about an hour and a half. I heard one man say:

“This is the proudest I’ve been of my city in a long time. Look at all these people, they actually care.”

The sun set while we sat in the Common and made our way up the steps to the State House once again. Some started setting off fireworks, and others climbed the fence and architecture in the front of the statehouse. Aside from a few people who threw trash over the fence (and were immediately called out by the rest of the protesters with the chant “stop throwing shit”), we were completely peaceful. We weren’t blocking traffic as there were no civilian cars at this point, and later when there were, we made a pathway for them to get through.

The crowd began to thin out as people went home, and we decided to give it a few more minutes before we headed back to the car. We started handing out our medical supplies since it looked like we wouldn’t be needing them, and maybe others would want them for later protests.

That’s when the Boston PD sent three cruisers speeding into the crowd. No warning, I just turned to my right and people were running and screaming. The first one sped past, and the second one was inches from me. I actually hit the third with my sign out of instinct to “push” it away from me because it was so close.

This was a blatant baiting tactic to incite the violence that ensued. I was angry, the people around me were angry, we started chanting “THIS WAS PEACEFUL!” and some started throwing things over the fence. When they sent the cruisers back through, they got blocked this time and the National Guard came out of the State House and began firing rubber rounds into the crowd, striking one girl in the ankle who we helped, and another in the ribs.

On another pass through, a protester threw a frozen water bottle at the side mirror of a cruiser and it detached. The back window was shattered by another flying object. People threw their milk jugs at the cruisers and the National Guard sent an armored car through the crowd.

The crowd fractured and began to move off in different directions. We walked down the side of Boston Common where a garbage fire burned in a barrel and many had embedded their signs in the wrought iron fence. Police were in full riot gear, and in the distance smoke billowed from something large burning, which we later learned was a cop car.

We crossed the street and a girl stood there rubbing her face and crying. She had been pepper sprayed, saying she was too close to the perimeter as she was trying to videotape a man being beaten in the corner by police. This 18-19 year old girl apologized profusely for seeming to inconvenience us as we poured milk in her eyes. Her friends stood by her and helped her find her phone and we parted ways.

Another man down the street had someone guiding him because he had been tear gassed, but refused our help. Farther, we came to a street where police were surrounding a girl on the ground. People were shouting and I started recording, getting closer so she wouldn’t be alone. The police came at us with wooden batons and pushed us back. The girl was helped up and stood at the edge of the crowd crying and demanding to know the name of the cop who pushed her down, breaking her box of belongings and dragged her across broken glass. I didn’t get the name or badge number of the officer because he refused to turn around, but another officer retrieved her box of things and we left as they radioed in to “come wipe down the street.”

We helped get glass out of her ankle and gave her a bandage. We gave her the badge number of one of the officers, in hopes that she could get the other one via that, somehow. The man who assaulted her refused to identify himself and is paid by tax dollars.

While we were helping her, squads of police cars flew past us down the street. In the distance we could hear popping, and I’m still unsure if it was fireworks or rubber rounds. We walked an hour back to the car, checking in with people on the way who let us know where to avoid as we did the same.

We learned later that the police had shut down the T after demanding that everyone go home.

As we drove home, I tried to process what I had just been a part of. I’ve always supported police. I was raised with the mantra, “don’t talk to strangers… except for police.” They were always heroes, always there to protect me, and the bad ones were negligible in comparison to the greater good. After last night my opinion has changed.

I saw how my fellow Americans are treated by police when they try to protest peacefully for their rights. I saw how the Boston Police Department acted like cowards and used their vehicles as weapons. And I saw the power that people can wield when they come together.

We won’t stop until they stop, WE DEMAND CHANGE NOW. Get out there and do something about it!!!