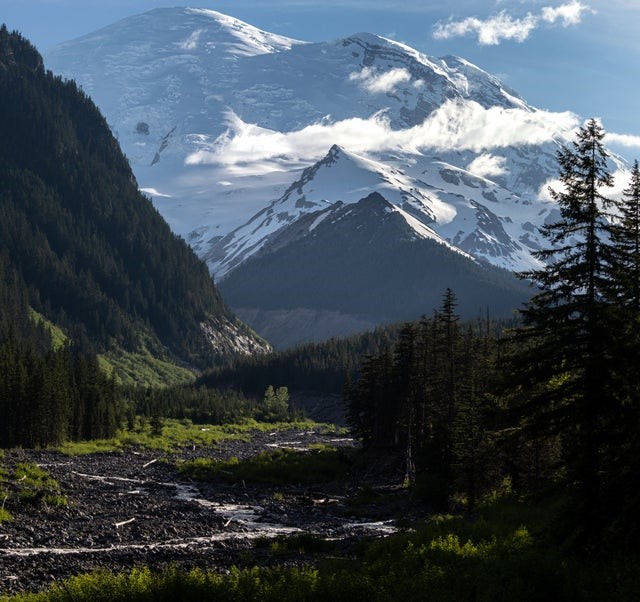 Mt. Rainer from the Whiteriver campground – 2020  photo by np2fast

Now that Florida and Texas have again closed their bars, you’re probably wondering: “Can Joe Biden’s lead in the polls get any bigger”?

Here’s your answer. On Thursday, the Trump administration asked the Supreme Court to invalidate the Affordable Care Act. They did this without any plan for replacing it, at what appears to be the height of new cases of the COVID pandemic. From Charlie Pierce:

“Imagine, for a moment, you’re a Republican. You already know that your party has hitched its wagon to the biggest ass in the history of American politics, and that he has proceeded to bungle a response to the worst public health crisis in a century, touching off a deep recession in the bargain….Perhaps you’re thinking to yourself this morning, y’know, maybe this isn’t the best historical moment to take healthcare away from tens of millions of Americans.”

Political gurus say that timing is everything.

Trump is doing this despite the fact that 487,000 new people signed up with HealthCare.gov last month after losing their company-provided health insurance coverage because of the pandemic-induced recession. That was an increase of 46% in sign-ups compared to the same month last year.

And Trump’s trying this stunt in the week when the US hit a new record for the highest daily total of reported COVID-19 cases – more than 45,500! He’s picked the perfect time to try again to throw an estimated 20 million Americans off of their insurance coverage.

This has been the GOP plan all along: we’re trimming the rolls of people on entitlement programs. We’re doing it through the courts, through legislation and by allowing the COVID-19 infection to spread.

It’s no longer clear which is the greater threat to lives in America: The Coronavirus, or Donald Trump.

This should remind all of us that we need to make Medicare for All, or another form of single payer insurance, a top priority after the November election.

Biden said it all in a speech this week: (brackets by Wrongo)

“Amazingly, he [Trump] still hasn’t grasped the most basic fact of this [COVID] crisis: to fix the economy we have to get control over the virus. He’s like a child who can’t believe this has happened to him. All his whining & self-pity…his job is to do something about it.”

We desperately need new leadership. Maybe we’ll get it next January.

Now it’s time to forget the Sahara Dust storm for a few minutes. You should also ignore the fact that the Dixie Chicks changed their name to “The Chicks”. How exactly does THAT rebranding improve our world, or their career?

Time to take our masks off, sit at an appropriate physical distance, and kick back: It’s time for our Saturday Soother.

Let’s start by brewing up a huge mug of Ethiopia Nano Genji Agaro Gera coffee ($21.00/12oz.) from Sacramento CA’s Temple Coffee roasters. The roaster says you will experience notes of nectarine and apricot with your first sip.

Now find a comfortable lawn chair, and settle in to listen to “Summertime”, written by George and Ira Gershwin, and Dubose Edwin Heyward, in 1935. It’s performed here by George Winston from his album “Restless Wind”:

It was also memorably performed by the late, great Sam Cooke in 1957, released as the B-side on the single of Cooke’s big hit, “You Send Me”.