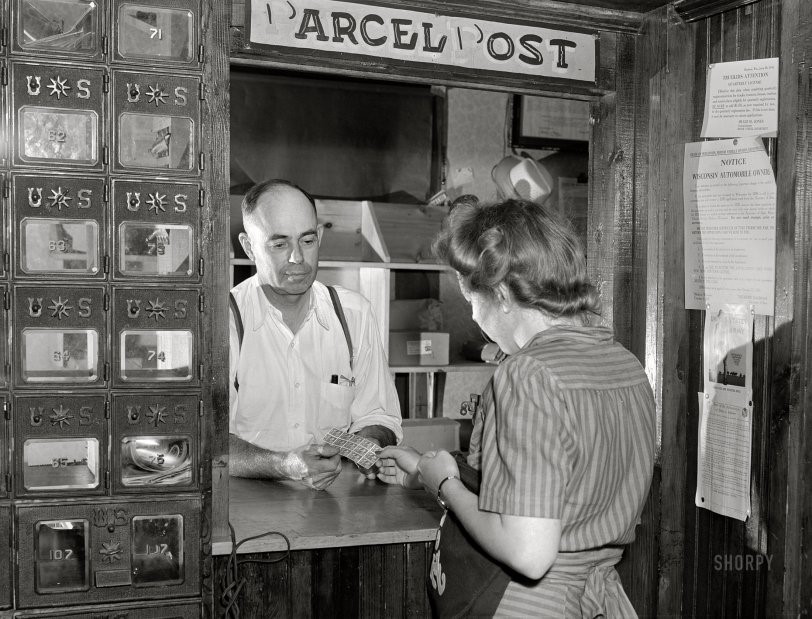 Buying stamps at the post office, Siren, WI – July 1941 photo by John Vachon for the Farm Security Administration, via Shorpy.

The Senate has adjourned until after Labor Day, despite not coming to an agreement on the much-needed next Coronavirus stimulus package. From CNBC:

“Congress and the White House have spent the past few weeks debating what to include in the package, but have been unable to come to an agreement. One of the biggest sticking points: Jobless benefits. Democrats want a continuation of the enhanced unemployment payment of $600 per week, while Republicans say that amount is too high. Democrats are also pushing for more than $900 billion for state and municipal aid, and $60 billion in food assistance, far higher than what Republicans have proposed.”

This means any deal could be weeks away. Meanwhile, around 28 million Americans remain unemployed and many of the relief provisions from the first stimulus package have dried up.

And Postal Service funding is also broken and lying in the weeds by the side of the road.

McConnell offered a new COVID economic aid bill (the HEALS Act) 10 weeks after the House had approved its version, called the HEROES Act. Then, Mitch dismissed the Senate for a month rather than allow Senators to negotiate with the House Dems about adding USPS funding to the HEALS Act, which included no funding for the USPS. The House’s HEROES Act passed in mid-May contains $25 billion for USPS.

There is no accountability for any of these birds except at the ballot box, and the GOP is making it very hard to remove them by voting. Only a very few Republicans, notably House Minority Leader Kevin McCarthy, (R-CA) and Sen. Roy Blunt, (R-MO) have broken with Trump on the need for funding the Postal Service.

We mentioned mail sorting machines on Friday. We now know that in May, the USPS planned to remove a total of 969 sorting machines (about 20%) out of the 4,926 it had in operation as of February. Most (746) of the sorting machines scheduled for removal were delivery bar code sorters (DBCS), the type that sort vote-by-mail ballots and other similarly sized pieces. You can view the USPS equipment removal presentation here.

WaPo reported that the USPS sent letters in July to 46 states and Washington DC warning that they may be unable to deliver mail-in election ballots by the deadlines set by the states for them to be counted. About 186 million voters are subject to the Postal Service’s heightened warning. The states that were not warned about potential issues were Oregon, Nevada, New Mexico and Rhode Island. The USPS letter was only released on Friday.

This is a huge and serious escalation in concerns that even if people follow all of their state’s election rules, the pace of Postal Service delivery may disqualify their votes.

There’s a big disconnect between the public and the government. They no longer really want to help you solve your problems. You can no longer rely on them to count your votes. You’re about to be kicked out of your apartment. You’ve got no money left in the bank, and after years of being told it’s your fault, you know nothing could be further from the truth.

Sorry, Republicans, this is what you have become. You’re now the Walrus: He is you and you are him.

Sorry, no coffee for you this week, we’re already too jacked up by the prospect of losing our democracy. On the other hand, we still need a break from the steady beat of the Trumpian drums, so it’s time for our Saturday Soother.

We lost four large trees on the fields of Wrong last week during the half hour that TS Isaias was with us. The outcome was that we were without power for five days, and it took about a week to cut up and move all of the downed wood.

This week, we left our daily 14+ hours of summer sunlight behind. Today we have 13 hours and 53 minutes, and it, like our politics, will just get worse.

Time to settle back at an appropriate physical distance, and listen to two love themes composed by Dominic Frontiere that originally appeared in the TV series “The Outer Limits”. They are performed here on George Winston’s album “Summer”, recorded in 1991: