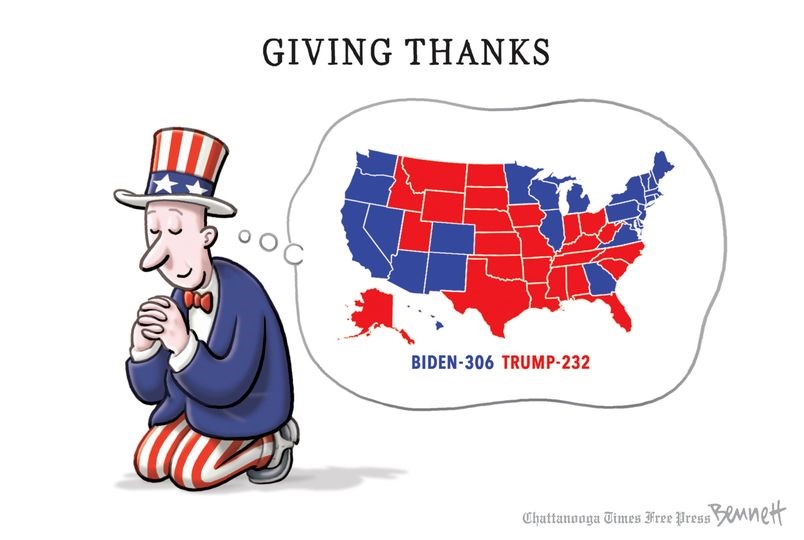 Wrongo is thankful to all who read the Wrongologist. We’ve been at this same pop stand since 2011, and some of you have been with us the entire time. Special thanks to long haulers Monty B, Fred VK, David P, Pat M, and Terry Mck, among others.

Another crucial thing: The election of Democratic governors, lieutenant governors, attorneys-general and secretaries of state in 2018 in PA, MI and WI had a huge impact in deciding the 2020 election. They helped people vote, they fought frivolous lawsuits, and made sure that votes were counted and certified.

This is another reason why voting in state and local races is so important.

This Thanksgiving may not have as many people around the dinner table as usual. But it isn’t the first time our Thanksgiving is shrouded in tragedy. When old people like Wrongo sat down to a peaceful Thanksgiving dinner in November, 1963, we were mourning the death of JFK. Twenty years before that, Wrongo’s parents were celebrating while a continent apart, while my mother was pregnant with me, during WWII.

We are truly thankful to those who came before us, and to our family members and friends who we can’t be with today.

We’re thankful to those who are today on the front lines in the military service, or at home in our hospitals, schools, firehouses, and police stations.

And thanks to the Wrongologist for this tireless commitment to his his column especially during this period when we have witnessed such an assault on truth. As long as he keeps the light on, those of us who have appreciated
His POV will be tuned in. Happy Thanksgiving.
FVK

Many thanks to you Mr. Wrongo for keeping true to the ideals of fairness, decency and truth. You did not let your fellow countrymen down. As a “Northern Alien” I have had my doubts about the ability of the USA to survive as a democracy but it is because of people like you that my faith has been restored.
Cheers!