The Daily (no) Escape: 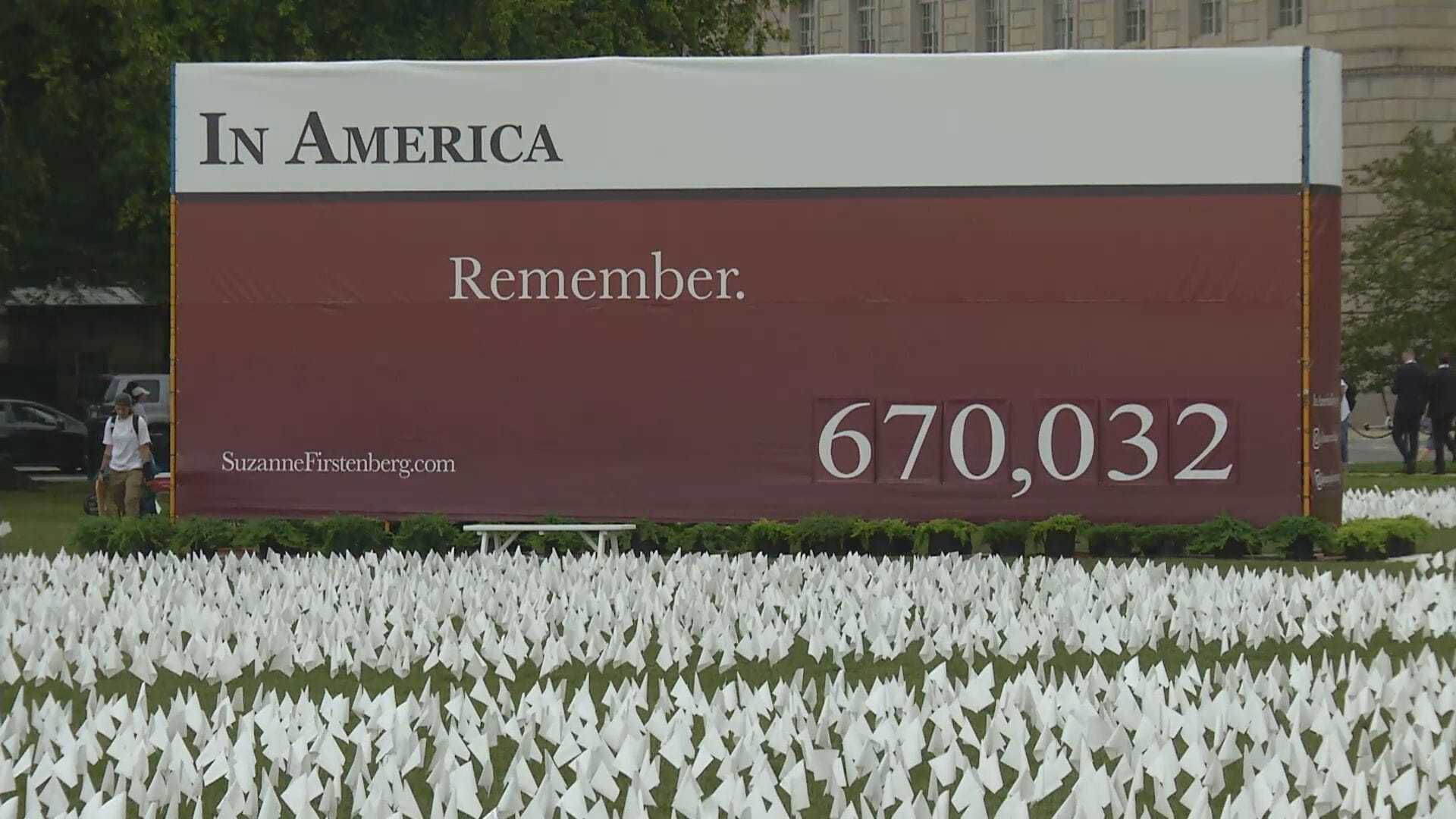 More than 660,000 white flags have been put on display at the National Mall in Washington DC in memory of Covid victims. The display is called “In America: Remember”, organized by artist Suzanne Brennan Firstenberg.

“Reality is that which, when you stop believing it, doesn’t go away”  ̶  Philip K. Dick

And a corollary: Delusion requires passionate and unyielding belief to keep pesky facts from intruding. This is why for some people, cults are a viable form of social organization.

The Covid vaccines save lives. America has an abundant supply. The shot is free. But many Americans remain unvaccinated. Some don’t have access, but it appears the vast majority of the unvaccinated are making a decision that appears to be driven in part, by their politics.

The WaPo reports that:

“Since May of this year, more than half of the deaths from the coronavirus have been in states that voted for Donald Trump. There have been 239 deaths per million among red-state residents, compared with 150 per million in blue states.”

And for vaccinations, states that voted for Trump in 2020 have lower vaccination rates. Here’s a chart: 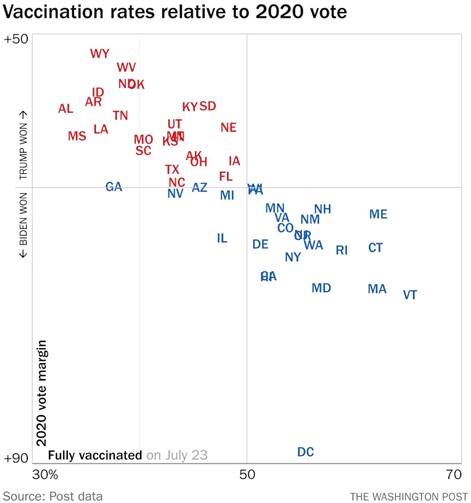 Are Republicans following a political strategy with vaccines? Brian Beutler thinks so:

“To grasp that Republicans encouraged COVID spread to harm Biden, you don’t have to believe, in a conspiracy-addled way, that they convened in secret and built a playbook for maximizing infections. You simply need to observe that a critical mass of conservative elites view undercutting Biden and Democrats as a political lodestar, and make immensely consequential governing and broadcast decisions on that basis alone.”

According to the NYT, that thinking has led to 16,200 preventable deaths since July 1 nationwide. And it’s important to realize that most deaths occurring now are preventable in a way that was absolutely not the case at the start of the pandemic.

Following on Phillip Dick’s quote above, a reality is that Covid is now a preventable disease.

Ignoring reality, Red State governors are actively discouraging vaccination and masking. They are actively encouraging a preventable but deadly illness to spread. They are putting the entire nation at risk of a vaccine resistant variant. They’re threats to our national security.

Polls show that Biden’s approval rate has slipped, in part due to the Covid surge. Covid may be hurting Biden politically, but it’s hurting Red State Republican constituents literally (and seriously). The Red State Covid fatality rate isn’t high enough to really hurt their vote totals except in marginal districts. The Republican bet is that the intensity/turnout advantage they get from anti-Vaxx deniers will pay off in the 2022 mid-terms.

They seem to have internalized that a pandemic combined with pandemic denialism helps them. In 2020, the Republican ground game benefited from the fact that Covid denialists were more willing to go out in public. They used the fact that their voters were more likely to vote in person to push Trump’s Big Lie election-fraud theories.

But here we are. They’re living in a world where the virus is fake, and thousands of people are dying from taking the vaccine. They’re taking Ivermectin and anti-malarial drugs because the fake virus is a little threatening, but not bad enough to take the vaccine. It can be deadly, but “it isn’t for me” because it’s a liberal conspiracy.

But the “reality” is that excess deaths from all causes since February, 2020 according to the CDC is 830,400. Last year, the age-adjusted all-cause mortality rate in the USA rose by 15.9%. This is by far the biggest one-year rise in that rate in the 120 years that official records have been kept for this basic measure of overall public health.

Time to wake up Red Staters! Many of the GOP higher ups (and their media lackeys) think that you’re not masking or taking the vaccine, will hurt Biden and the Democrats. Maybe you should be thinking about the greater harm that following their lead may bring to you and your family.

To help you wake up on this last Monday of summer, listen to the Foo Fighters, who are going through a “disco discovery” stage wherein they call themselves the Dee Gees, cover the Bee Gees’ “You Should Be Dancing”: