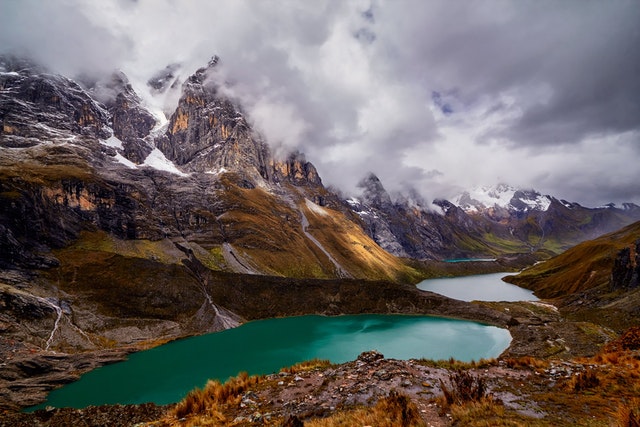 Cordillera Huayhuash, Peruvian Andes – photo by mh-travelphotos. The area has very few people, and is a popular trekking destination. It includes six peaks above 6,000 meters.

Both of those thoughts would be er, wrong.

The WaPo reported about our new plan: (emphasis by Wrongo)

President Trump, who just five months ago said he wanted “to get out” of Syria and bring U.S. troops home soon, has agreed to a new strategy that indefinitely extends the military effort there and launches a major diplomatic push to achieve American objectives, according to senior State Department officials.

Although the military campaign against the Islamic State has been nearly completed, the administration has redefined its goals to include the exit of all Iranian military and proxy forces from Syria, and establishment of a stable, nonthreatening government acceptable to all Syrians and the international community.

You remember al-Qaeda, the guys who took down the NY World Trade Center? (We’ll remember that tomorrow). Well, the first step in the new US “diplomatic push” is to prevent an imminent Syrian army operation against al-Qaeda aligned groups in Syria’s Idlib province:

While the US agrees that those forces must be wiped out, it rejects “the idea that we have to go in there…to clean out the terrorists, most of the people fighting….they’re not terrorists, but people fighting a civil war against a brutal dictator,” as well as millions of civilians, said US special representative for Syria, James Jeffrey. Instead, the US has called for a cooperative approach with other outside actors.

He went on to say that:

The US will not tolerate an attack. Period.

Jeffrey had just visited Turkey to consult with Turkish president Erdogan about the upcoming Idlib attack by Syria, Russia and Iran. The result of the meeting was a plan that Erdogan presented at the Tehran summit that Erdogan attended with President Putin of Russia and President Rohani of Iran.

The parties didn’t agree to the US/Turkish plan, and the attacks on Idlib have already begun.

Jeffery said that the Trump administration’s plan for Syria involves more than the defeat of ISIS. It also was focused on reducing Iranian influence, and preventing Assad from controlling all of Syria’s geography. Jeffery said that Trump supports the strategy, contrary to Trump’s previous statements about withdrawing US troops after defeating ISIS:

…we’re no longer pulling out by the end of the year….That means we are not in a hurry…

America needs to wake up. Those who voted for Trump did so in part because he wasn’t the warmonger that Hillary was. At some point, they’ll have to admit that Trump’s new Syria policy puts us in direct conflict with Russia and Iran on the ground in Syria. That isn’t something that could be implemented without Trump’s agreement, and with less than 60 days to the mid-terms, is this just a political calculation?

It’s difficult to know if Trump truly cares about what happens with Assad, but we know that he has a burning desire to confront Iran. And his new Syria policy is all about Iran. And he’s already tweeted warnings to Assad and Putin to leave Idlib alone.

Does anyone reading this believe that he’s thinking geopolitically? And since Putin, Rohani, and Assad have already defied Trump’s tweeted warnings, Americans should be thinking that there’s liable to be a strike at least against Iran, in the next few weeks.

You know that all the neocons around him, like Bolton and Pompeo, will goad him on. And after that, it could be game on.

Perhaps Trump is bluffing. We have no realistic means to prevent the operations against Idlib by Russia, Iran and Syria. The US military understands that an attack on Syrian and Russian forces would likely escalate into a direct conflict between nuclear powers.

We can’t assume that the “resistance” inside the White House either agrees with the US military, or is capable of averting such a risk.

Wrongo’s solution? Not one more drop of American blood should be wasted in either Iraq or Syria.

Withdraw completely from Syria. Hand over our in-country bases to the Syrians. Encourage and assist the Kurdish insurgents and the Syrian Defense Forces to reintegrate into Syria. Pass the intelligence we have on the jihadis we have assisted over the years to Damascus.

Then we have to hope that Trump moves on to focus completely on more important issues, like Colin Kaepernick’s shoes.