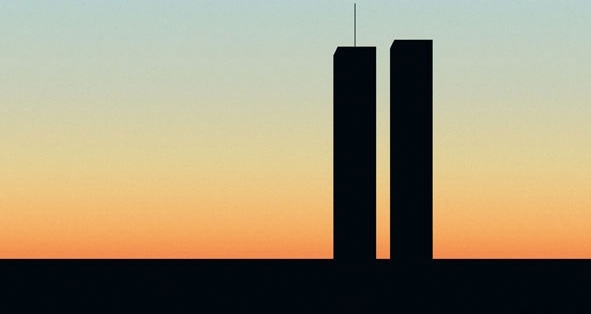 Has it been 17 years already?

A quote from Edward R. Murrow: “No one can terrorize a whole nation, unless we are all his accomplices”, describes where America is today.

As we remember the 17th anniversary of the al-Qaeda attack on the US, we should realize that most of the geo-political problems we face today can trace their root causes to the attacks on 9/11.

And 17 years later, it appears that we have become the accomplices of terror. We can’t let the Muslim world alone. We’ve continued to keep troops in Afghanistan and Iraq. We’ve beefed up our presence in Africa. The enemy has morphed from al-Qaeda only, to ISIS and al-Qaeda, with branches all across the world.

Just yesterday, Wrongo wrote about our current misadventures in Syria, where we have several thousand troops who were not invited in by the Syrian government. We said that US Syrian policy seems to be teetering on conflict with the other regional powers, Iran and Russia, because we are insisting that Iran exit Syria.

We continue to spend blood and treasure in the Middle East because of 9/11. We were meddling in the ME before 2001, and those efforts helped make bin Laden’s point that the US was responsible both for the suffering the US was causing directly through its sanctions, and the suffering we caused indirectly, by keeping Middle Eastern dictators in power.

To that, bin Laden added a decisive idea: Attack the US to end its power over the Middle East.

Seventeen years later, we are stuck in a Middle East quagmire. We cannot win militarily, but we never lose decisively. On this 17th anniversary, let’s address a few questions to our political and military leaders:

If, on September 12, 2001, you had predicted where we are today, no one would have thought you were credible.

Since 9/11 our presidents have all tried hard to act tough on terror, as have our Senators and Congresspersons. They have all said that our young soldiers are available to go wherever the next Islamist problem arises. So, in the past 17 years, we’ve spent over a trillion dollars to protect the homeland, and while to some degree, we are undoubtedly safer, we haven’t defeated the Islamists.

The current crop of Republicans in the White House are trying more of the same: To convince us that the challenges we face in the world are simple, that we must be realists, aggressively going after what we want. They say it all comes down to “good vs evil.”

Sadly, we really live in an extremely complex world, and ignorance of its complexity is dangerous. Remember in 2006, there were reports that George W. Bush was unaware of the difference between Shia and Sunni as late as two months before the Iraq invasion. Combine that with the ongoing support for the neo-con’s Exceptionalist ideology, and we’ve all paid, and continue to pay, a huge price for their simplistic worldview.

The reality is that when tough talk is divorced from knowledge, you do dumb things, like start wars that diminish our standing in the world, that cost us terribly in lives and money, and that produce zero in the way of political results.

Trump seems ready to place a bet that his tough guy stance on Syria will cause Iran and Russia to back down. Those of us who pay taxes and send our kids off to war, should make it very clear that the American presidency is no place for bullies.

And rather than signifying weakness, traits like thoughtfulness and collaboration are exactly what we want from the Leader of the Free World.

Anyone can say “lock and load, we’re gonna fight!”

We need to re-learn how not to fight, and how to exist in an ambiguous world without withdrawing, or being ineffectual. Since 9/11, when things get tough, our politicians strut around with chins out. They prefer form over substance and in the end, they’re just praying that it all works out, but it hasn’t.

Remember the 9/11 heroes and its victims.

But let’s stop listening to those who pander to our fears, and vote them out of office.