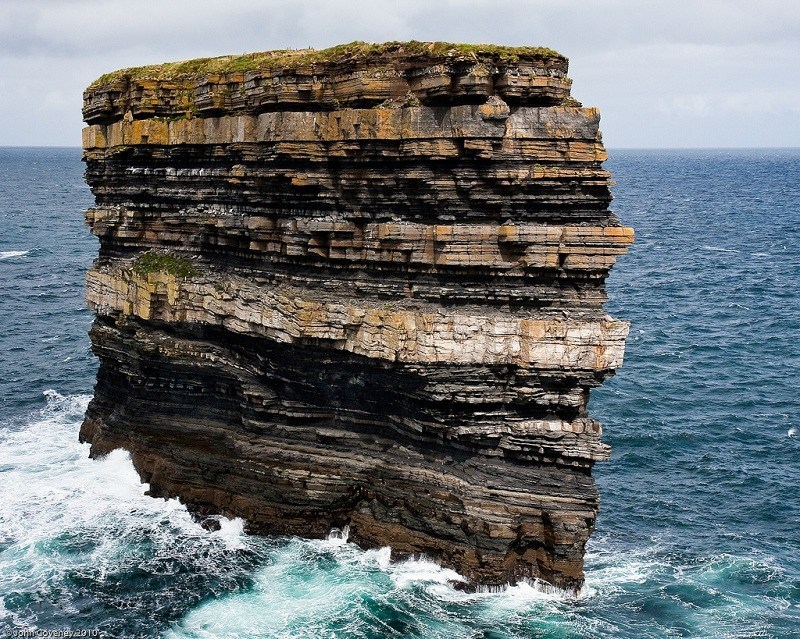 Dun Briste Sea Stack – 2010 photo by John Coveney. The Stack shows 350 million years of sediment. In 1981, scientists found the remains of a medieval house, walls, cultivation ridges, and a corn grinding stone on the top. Must have been a tough commute.

We may be over-emphasizing the Mueller report. From Politico:

“The Mueller report may be consuming Washington — but it barely registers for vulnerable Democrats meeting voters outside the Beltway. In a half-dozen town halls from California to Connecticut this week, swing district Democrats fielded few — if any — questions about special counsel Robert Mueller’s nearly two-year probe, even as it threatens to dominate the party’s summer agenda.”

This is called a “District Work Period” for the House, and many members are conducting town halls. Politico reports that:

“I’ve been very surprised by how few people brought [Mueller] up since I’ve been back,” said Rep. Dean Phillips (D-Minn.) after two weeks back in his suburban Twin Cities district.”

No one brought up the Mueller report at Rep. Abigail Spanberger’s (D-VA.) town hall in her district west of Richmond:

Rep. Josh Harder of California told Politico he had “10 times the amount of interest on issues like health care, immigration and student debt than on impeachment or investigations into Trump.”

So, it’s good to realize that the attendees at town halls may be more representative of the country than what we see on MSNBC, PBS or FOX.

In other political news, Joe Biden declared he’s running for the Democratic 2020 presidential nomination. The NYT says that he’s starting with $0. This raises the question of funding strategy. Sen. Sanders and Sen. Warren have sworn off attending high-dollar fund-raisers to bolster their populist credentials. Most others have said that they will not take PAC money.

Some top Obama fund-raisers are lining up with Sen. Kamala Harris and Mayor Pete Buttigieg, who are trying to have it both ways. From the NYT: (brackets by Wrongo)

“Unlike [Sanders and O’Rourke], Mr. Biden does not have an at-the-ready list of hundreds of thousands of contributors to ply for small donations. He must rely heavily, at least at first, upon an old-fashioned network of money bundlers….who can expedite dozens, if not hundreds, of checks for $2,800 each, the legal maximum an individual can contribute in the primary.”

This raises two questions. First, Biden has been a poor funds raiser in the past. He was near the back of the fund-raising pack in his 2008 presidential primary run. He raised $8.2 million from individual donors in 2007; while his competitor, Barack Obama, raised more than $100 million during the same year.

The Times says Biden felt that he couldn’t raise the tens of millions of dollars necessary to compete against Hillary Clinton in the 2016 race. That was one reason why he decided in 2015 not to run.

A second point is that whoever wins the Democratic nomination for president will need to raise tons of cash. It is doubtful that individual donors can provide the $1 billion or so it will probably take to defeat Trump. If the nominee can’t rely solely on individual donations, he/she will need money from PACs and Corporations.

This is the inherent tension in the current funding strategy of the Democratic Party.

Biden will go after big donors, and he’s likely to succeed. He was the VP for 8 years, and he has deep ties to moneyed donors and big companies, many of which are incorporated in his home state of Delaware. The rest of the field has a choice to make: They can criticize Joe for taking corporate donations, but ultimately, the Democratic nominee will have to turn to the big “bundlers”, along with corporations and PACs to win the election.

Their current strategy runs the risk of making the ultimate Democratic candidate look cynical at a time when the candidates want to appear authentic, believable, and on the side of the little guy.

The NYT says that Biden has to raise $100,000/day from here to Christmas to match what Sanders has already raised. We’ll see if he’s up to it this time.

It’s gonna take lots of money to stand out in a field of 20 candidates.