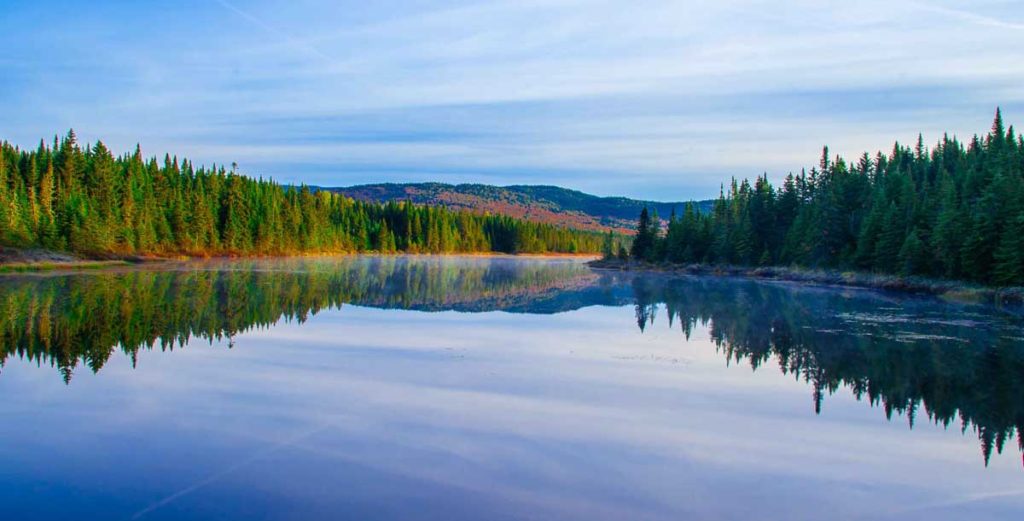 East Inlet Pond, Pittsburgh NH – photo by Wes Lavin. The East Inlet area has one of the few remaining virgin stands of forest in the east.

How did Boeing, a company known for meticulous design and manufacturing, screw up the 737 Max so badly? Bloomberg is reporting that Boeing outsourced software development for some of the 737 Max’s software to Indian companies. There are concerns that decision may have contributed to Boeing’s two deadly crashes.

“It was controversial because it was far less efficient than Boeing engineers just writing the code.”

It turns out that the HCL engineers were brought on at a point when Boeing was laying off its own experienced software developers. In posts on social media, an HCL engineer who helped develop and test the Max’s flight-display software, summarized his duties:

“Provided quick workaround to resolve production issue which resulted in not delaying flight test of 737-Max (delay in each flight test will cost very big amount for Boeing).”

This may be resume inflation. Boeing insists that HCL had nothing to do with the Max’s Maneuvering Characteristics Augmentation System (MCAS) software. HCL said that it:

It isn’t unusual for US companies to use outsourced talent. Prior to his dynamic blogging career, Wrongo was CEO of an outsourcing firm. Our clients were the US government, and several big tech and office product companies, including Dell, Microsoft, and Xerox.

But managing outsourcing is tricky, both for the company moving the work out-of-house, as well as for the outsourcer. Unless the parties develop detailed plans, procedures, and follow strict quality control, even top people can produce work that fails to meet design standards.

The typical jetliner has millions of lines of code. From Rick Ludtke, a former Boeing flight controls engineer:

“Boeing was doing all kinds of things, everything you can imagine, to reduce cost, including moving work from Puget Sound, because we’d become very expensive here….All that’s very understandable if you think of it from a business perspective.”

In 2010, HCL and Boeing opened a “Center of Excellence” in Chennai, saying the companies would partner to create software used in flight testing. Ultimately, there is no denying that testing software plays a huge role in ascertaining safety standards. You can find further information and resources related to software testing and a guide to IEC 61508 Compliance by checking out the Parasoft website. Generally speaking, this type of testing is typical for big companies. Boeing also has a design center in Moscow. From Cynthia Cole a former Boeing engineer who headed the Engineer’s Union from 2006-2010: (emphasis by Wrongo)

“At a meeting with a chief 787 engineer in 2008, one staffer complained about sending drawings back to a team in Russia 18 times before they understood that the smoke detectors needed to be connected to the electrical system…”

A big reason for offshoring is price. Engineers in India make about $9 – $10/hour, compared with $35 to $40 for Indians in the US on an H1B visa, and higher for a US engineer. Anyone who understands offshoring knows that the cost of rework needs to be added to the apparent hourly cost, and in some cases, that can push the real price closer to $80/hour.

For the 787 Dreamliner, much of Boeing’s work was outsourced. It is well-known that the 787 entered service three years late, and billions of dollars over budget, in 2011. That was due in part to confusion caused by their outsourcing strategy.

Was another globalist lesson learned by Boeing with the 787? Not really, if the 737 Max troubles are any indication.

So this cheap labor story is another black eye for Boeing. It goes along with the Justice Department’s criminal probe, and the FAA’s continuing concern about the Max software. Boeing also has disclosed that the company didn’t inform regulators of the MCAS problems when they first learned about them, because engineers had determined it wasn’t a safety issue.

This is more of the crapification of America’s best companies as they chase lower costs. This time, people died.

Wake up Boeing! The high-value, high-risk elements in your product must be sourced at home.

If America had a real Justice Department, Boeing’s management would be in jail.