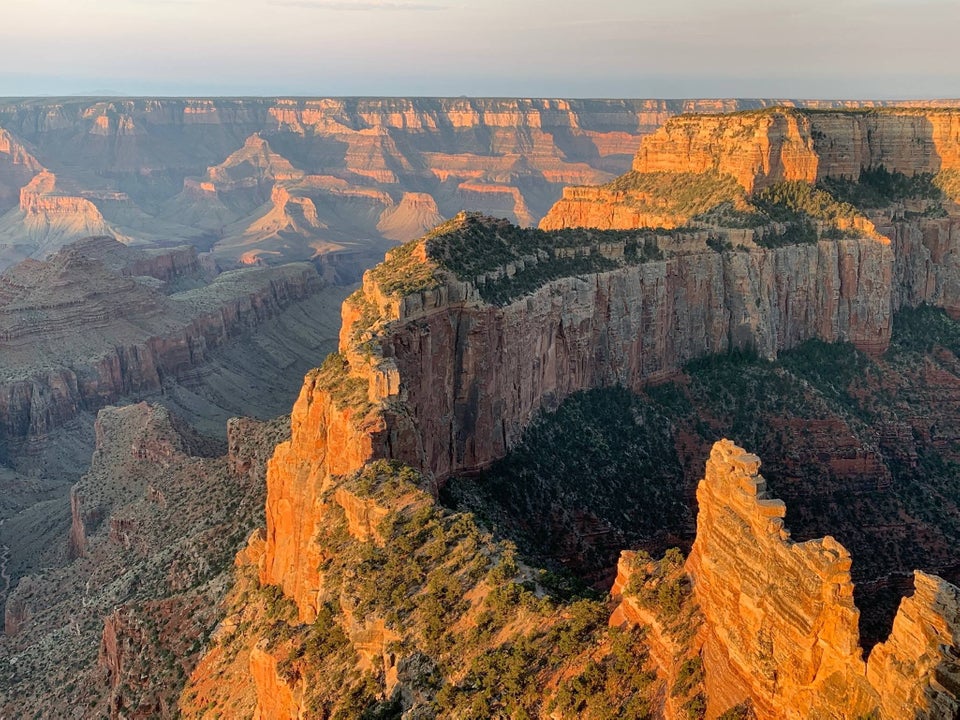 The WSJ has an important story on how people with what seems like pretty good household incomes, are getting more and more indebted trying to keep up a middle class lifestyle:

“The American middle class is falling deeper into debt to maintain a middle-class lifestyle.

Cars, college, houses and medical care have become steadily more costly, but incomes have been largely stagnant for two decades, despite a recent uptick. Filling the gap between earning and spending is an explosion of finance into nearly every corner of the consumer economy.

Consumer debt, not counting mortgages, has climbed to $4 trillion—higher than it has ever been even after adjusting for inflation. Mortgage debt slid after the financial crisis a decade ago but is rebounding.

Student debt totaled about $1.5 trillion last year, exceeding all other forms of consumer debt except mortgages.

Auto debt is up nearly 40% adjusting for inflation in the last decade to $1.3 trillion. And the average loan for new cars is up an inflation-adjusted 11% in a decade, to $32,187, according to a Wall Street Journal analysis of data from credit-reporting firm Experian.”

The Journal gives a generally sympathetic portrayal, provided you don’t go deeply into their comments section, where readers spout platitudes about Millennial’s lack of fiscal responsibility. Here’s a chart from the WSJ using some recent work by Georgetown bankruptcy law professor Adam Levitin showing how much certain costs have risen relative to wages: 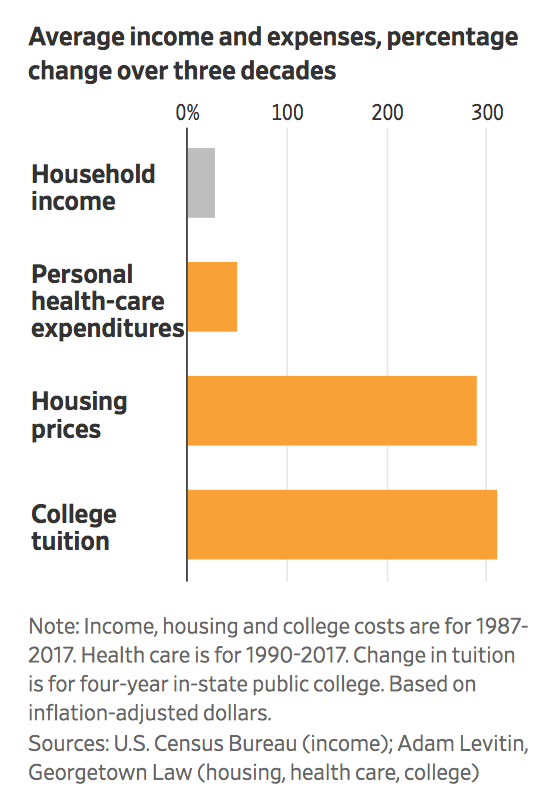 “Median household income in the U.S. was $61,372 at the end of 2017, according to the Census Bureau. When inflation is taken into account that is just above the 1999 level.

Average housing prices, however, swelled 290% over those three decades in inflation-adjusted terms, according to an analysis by Adam Levitin, a Georgetown Law professor who studies bankruptcy, financial regulation and consumer finance.

Average tuition at public four-year colleges went up 311%, adjusted for inflation, by his calculation. And average per capita personal health-care expenditures rose about 51% in real terms over a slightly shorter period, 1990 to 2017.”

Of course, in Wrongo’s youth, few young people were carrying large amounts of student debt. And if they went to coastal cities to build their careers, the cost premium over living in a city in the heartland wasn’t as high as it is now (except for San Francisco and New York, which have always been very expensive). Also, it isn’t just tuition that has gone up. All the other college costs, housing, meals, books, and fees, have also gone up more than 300% in the past 30 years.

It is notable that college costs have far outpaced the ability of those in the middle class to afford them. That is why student loan debt has become so high: working your way through college is no longer as realistic as it once was.

Turning to housing, the WSJ quotes Domonic Purviance of the Federal Reserve Bank of Atlanta, who says that people earning the median income can no longer afford the median-priced new home, which cost $323,000 last year, and barely have the means to buy the median existing home, which is now about $278,000.

Failure of wages to keep up with costs is a huge problem, and it has to be emphasized that this is not some inevitable outcome of our so-called “free markets” – it is driven by neo-liberal policy.

A few of the Democratic candidates are addressing the health and education cost burdens now adding to the debt load of all Americans. But we need more discussion that leads us to better policy.

With so much wrong in the world, we surely need to take a step back, and de-stress. To help with that, here’s your Saturday Soother. Let’s start by brewing up a large mug of Finca Las Nieves Green-Tip Geisha coffee ($35.00/8 oz.). This coffee is grown and roasted in Mexico. Located at an elevation of 4,000 feet, Finca Las Nieves is a 1,000-acre coffee farm located in Oaxaca State. It is completely off the grid — both solar- and hydro-powered. In addition to growing, harvesting, processing and roasting coffee, the farm also offers vacation bungalows for rent on the property.

Now, settle into a comfy chair and listen to Bach’s unaccompanied Cello Suite No. 1 in G Major, movements 1-3 of 6, by Yo Yo Ma. The video uses a painting by Hudson River School painter, Thomas Cole. It is called “The Oxbow”, located on the Connecticut River in Massachusetts near Northampton, MA. Here is Yo Yo Ma:

Those who read the Wrongologist in email can view and listen to the video here.