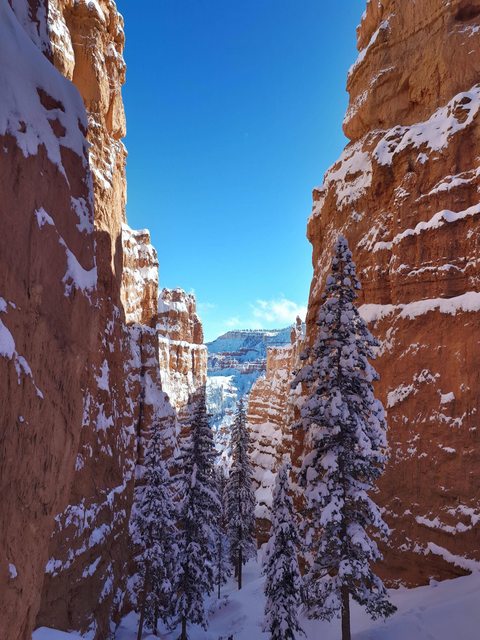 Over the past year, progressives have made a wealth tax a central part of the policy discussions in the Democratic primary. Both Sens. Bernie Sanders and Elizabeth Warren have proposals to tax the wealth of billionaires to help pay for improvements to the social safety net and infrastructure.

Currently, the US mostly taxes individuals on the income earned from their jobs and investments. The wealth tax is different since it would tax assets like stocks, yachts, artworks, and vacation homes.

Critics of the wealth tax have made a variety of arguments against them. The most prominent that the US government couldn’t enforce them effectively. Consider this from Business Insider:

“Usually, progressives cast Europe as a model for the cradle-to-grave social benefits that nations like Norway provide because of steeper tax rates on richer citizens. But most…countries have ditched them [wealth taxes] over the last few decades.”

Twelve European countries had a wealth tax in 1990, but the number now stands at four: Spain, Switzerland, Norway, and Belgium, which just introduced a limited wealth tax of its own.

Emmanuel Saez, economist at the University of California, Berkeley, who has analyzed the Warren and Sanders wealth tax proposals, says the European wealth taxes failed because governments created many exemptions that undercut their ability to draw revenue:

“The wealth taxes in Europe have failed by and large….they didn’t raise that much revenue because of big exemptions for asset classes….”

Others argue that the super-rich already donate big amounts to charity. One of Saez’s co-authors, Gabriel Zucman, says that the annual giving of Bill Gates and Warren Buffett equates to ~3%–4% of their wealth, while the other top 20 billionaires’ giving equals ~0.3% of their wealth. Like a really tiny wealth tax. Here’s his chart: 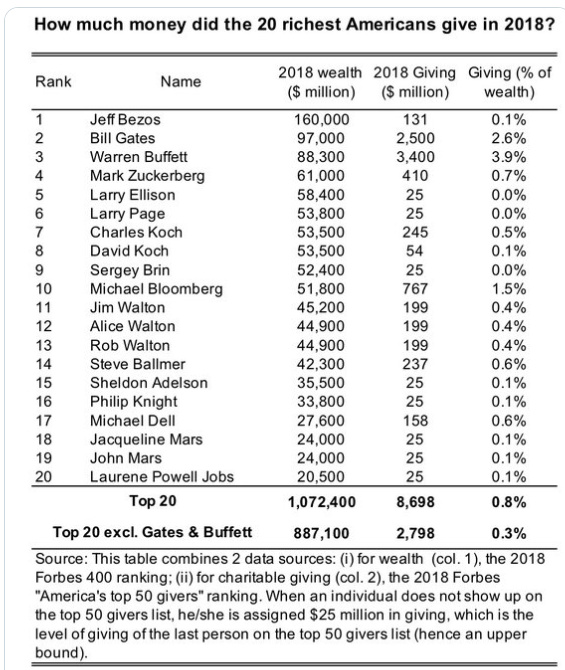 But, the average American paid taxes equal to 5.5% of their wealth, while their charitable giving = 0.3% of their wealth. Joe Six-pack gave the same amount of his assets to charity as did the top 20 billionaires.

If Warren’s 6% wealth tax was enforced on the top 20 richest Americans above, they would pay $60 billion to support the social safety net.

Moreover, despite the nay-saying by the rich, surveys show that Warren’s 2% tax is broadly popular:

(This was an online survey of 2,672 adults conducted by the polling firm SurveyMonkey from Nov. 4 to Nov. 11)

The survey by the NYT and Survey Monkey shows that 75% of Democrats and more than half of Republicans say they approve of the idea of a 2% tax on wealth above $50 million. The proposal receives majority support among every major racial, educational and income group.

The majority of college-educated Republican men disapproved, with only 41.5% approving of it.

The NYT reports that the proposed wealth tax is even more popular than the Trump tax-cut enacted in 2017. Only 45% of Americans said the tax cut was a good move:

“The movement against the Trump tax cuts since then has been powered, oddly enough, by Republicans. They largely still back the law — by 76% over all, compared with 20% of Democrats — but that support has dropped six percentage points since April.”

The shift on the tax cut is highest among high-earning Republicans: Americans earning more than $150,000 a year are far more likely to favor a tax increase on the very wealthy than the Trump tax cuts.

America’s tax code is designed to allow massive fortunes to grow ever larger. Wealth is concentrating in a tiny segment of the population, as the middle class shrinks.

We see that even the most high-minded billionaires can’t even give money away faster than their piles of dough are growing. And when Democrats like Warren and Sanders suggest a way towards tax reform, the GOP and the conservative think-tanks condemn them as socialists who want to punish success.

Most Americans are fed up with a government and an economy that overwhelmingly benefit corporations and the rich at the expense of everyone else. A wealth tax can work if Congress doesn’t get rolled by lobbyists that demand loopholes for their clients.

Wrongo will have no trouble backing a candidate who supports a wealth tax. But, increasing the taxes on corporations and a financial transactions tax should come first.