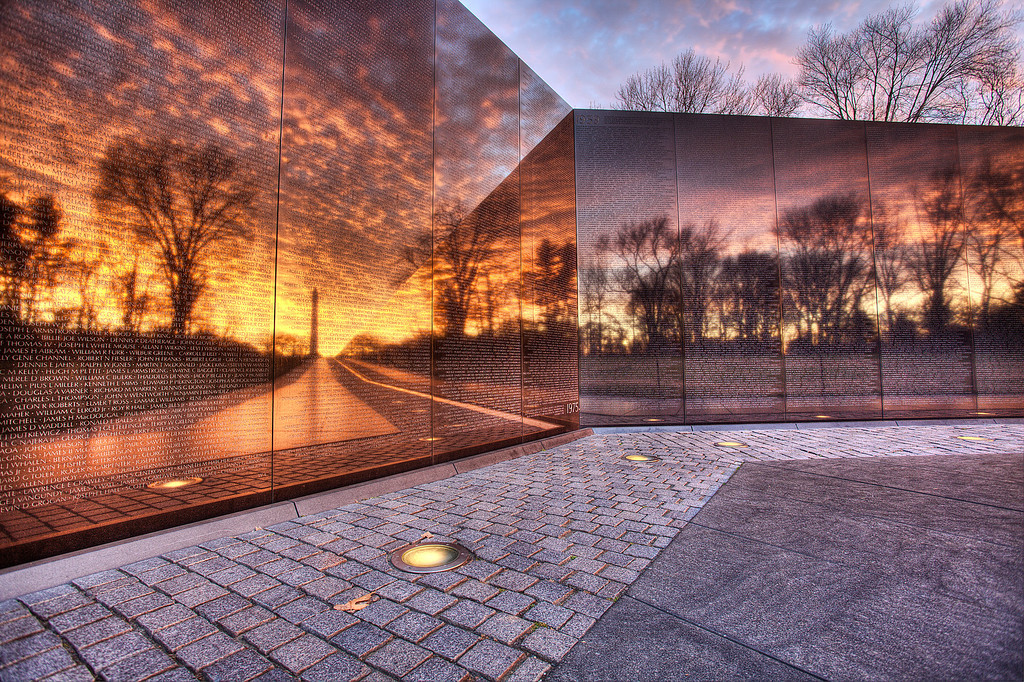 Reflection of sunrise at Vietnam Veterans Memorial – 2012 photo by Angela B. Pan

(There will be no column on Tuesday, 5/26. We will resume on Wednesday.)

Let that sink in. The 2020 virus toll is now greater than America’s combined combat deaths in Korea, Vietnam, Afghanistan and Iraq. Yet, many people think that concern about the virus is simply a political move designed to keep Trump from being reelected.

Let’s take a look back at the Tomb of the Unknown Soldier in Arlington National Cemetery. It is dedicated to deceased US service members whose remains were never identified. On March 4, 1921 Congress approved the first burial of an unidentified American serviceman from World War I in the plaza of the new Memorial Amphitheater.

Then on November 11, 1921, another unknown WWI soldier was brought back from France and interred in the tomb. President Warren G. Harding officiated at the interment ceremonies. During his remarks at the ceremony, Harding said this:

“Our part is to atone for the losses of the heroic dead by making a better Republic for the living”.

Harding was president from 1921 to 1923, when he died, apparently of a heart attack. Despite his being in office only two years, Harding managed to appoint four justices to the Supreme Court.

We see Harding as a failed president, but if all presidents made “making a better Republic for the living” their highest objective, America would likely be a much better place today.

The AP reports that, according to the Department of Veterans Affairs, more than 1,000 veterans have been killed by the Coronavirus, but that number does not include hundreds more who have died in state-run veterans homes. Most people know someone who died.

Despite that, Coronavirus deaths are being politicized. Trump says the numbers are exaggerated. Many Republicans say that masks and social distancing aren’t necessary. Some still compare the rate of deaths from the yearly flu to COVID-19 and say “what’s the big deal?”

On this Memorial Day, we seem to be hopelessly divided. Polls show that just 53% of Democrats have a great deal of confidence that medical scientists are acting in the public interest. But among Republicans, just 31% express the same “great deal” of confidence in them, a 22 percentage point difference.

Perhaps looking at a little more history would help. America was founded on principles of mutual help, compromise, and provision for the common defense in a hostile world. Ben Franklin said at the signing of the Declaration of Independence, that “We must all hang together, or surely we will all hang, separately.” What he meant was that unity was essential to achieving victory in the Revolutionary War.

Our Constitution codifies the golden rule into civic responsibility for finding solutions to shared problems. The expectation is that will be accomplished through reasoned debate as a part of the legislative process.

But our infatuation with neoliberal economics has brought us unregulated greed. That has led to failures of the commons. Management of health care by MBAs means we can’t provide our own medicines, or our own PPE. We can’t even maintain enough ICU beds on standby for peak needs.

The pandemic has shown us that we’re poorly equipped to handle both a humanitarian disaster and an economic crisis at the same time. What’s far worse is that those existential threats didn’t unite us.

If these twin threats weren’t enough, what possible threat will it take to unite us?

What may finish off America as a global power is our failure to learn from our mistakes. We live in a time of black or white answers, of friends versus enemies. We’ve forgotten how very useful understanding what is happening in the grey areas can be.

The virus isn’t going away with words or photo ops. And propping up the Dow Jones isn’t going save us either.

American Exceptionalism is over. We’re finding out that in most of the ways that count (healthcare, employment security, and unity) we’re performing at a mediocre standard.

Do we still have what it takes to correct our slide?