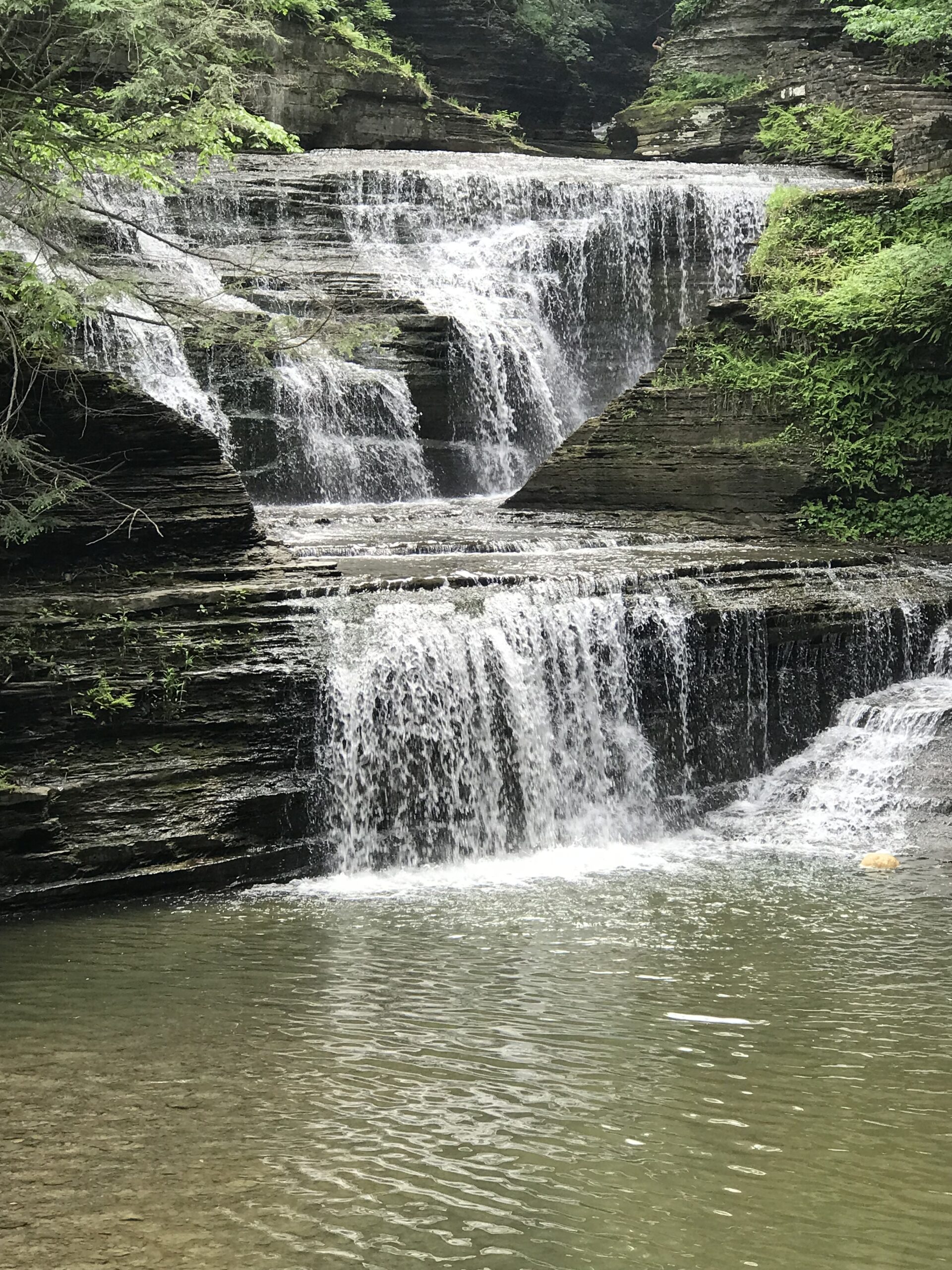 The following chart appeared in the NYT on Tuesday in an article claiming that the recession is over. The unfortunate reality is that the COVID recession was artificially induced by a shutdown of the economy. But it may now be transitioning into a longer, systemic recession caused by poor economic policy. Take a look at the chart: 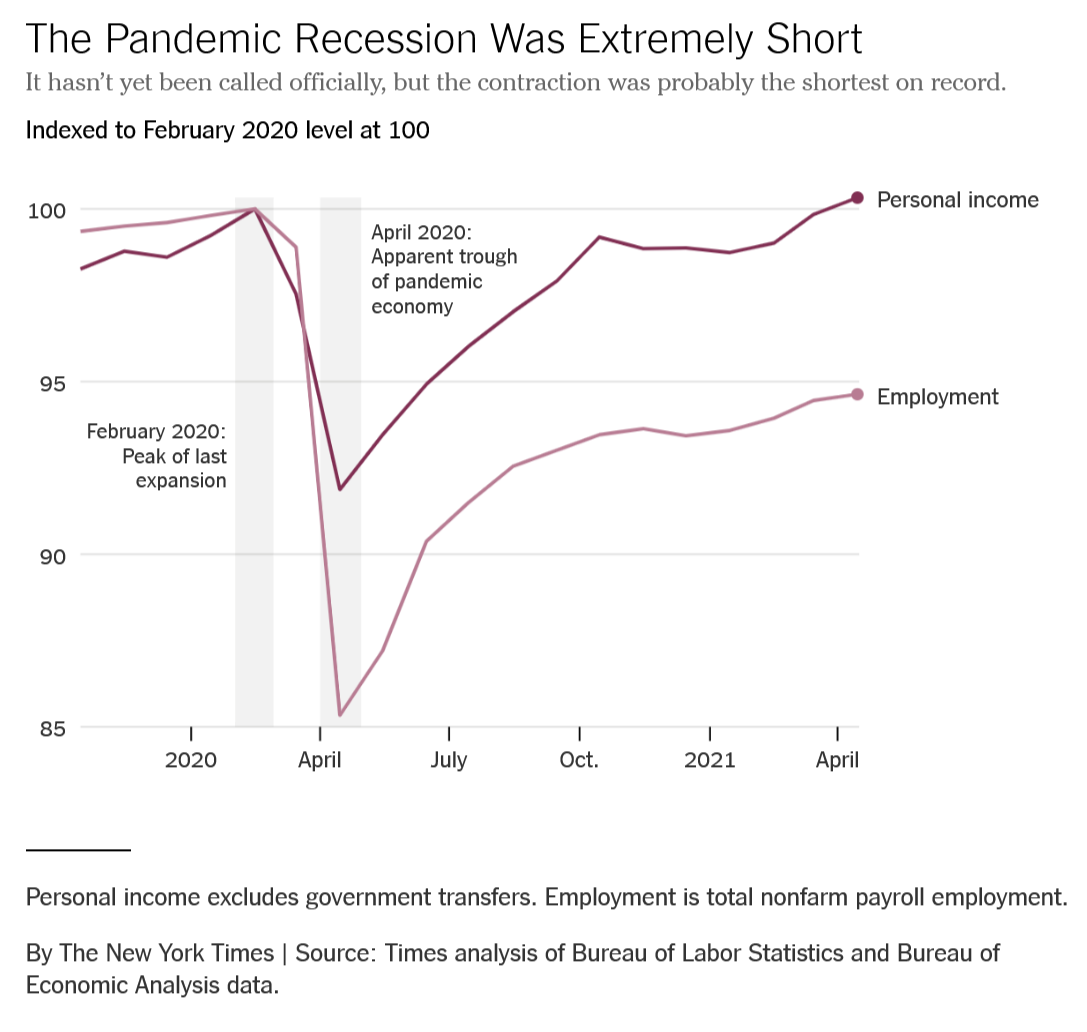 While economists say that, by traditional definitions, the Covid recession didn’t last very long, we are still down 7 million jobs from pre-pandemic levels, even while personal income is back to pre-Pandemic levels. So, how can the recession be over?

And why are lawmakers in Republican states calling for an end to unemployment benefits when so many remain out of work? Zandar says we should start by looking at Tennessee’s official job posting website:

Of the 8,500 jobs on the state of Tennessee’s official job board, about 8,250 pay $10 an hour or less, which is a poverty level wage even in Tennessee. But Tennessee’s governor Lee has decided to stop accepting CARES Act money in July, saying he didn’t want to pay people to sit at home.

As Ezra Klein said in the NYT: America doesn’t fight poverty, it runs on it.

“The American economy runs on poverty, or at least the constant threat of it. Americans like their goods cheap and their services plentiful and the two of them, together, require a sprawling labor force willing to work tough jobs at crummy wages. On the right, the barest glimmer of worker power is treated as a policy emergency, and the whip of poverty, not the lure of higher wages, is the appropriate response…”

“Vast numbers of Americans are kept poor for a reason. Any whiff of labor organization, or worker solidarity is ruthlessly annihilated in order to maintain millions of Americans working for single-digit hourly wages, or slightly higher wages, but no benefits whatsoever. We demand it, because we know corporations will just break our backs with higher prices if we give in. Either way, we’re the ones who pay, and it’s never the billionaires.”

Klein mentioned a report, “A Guaranteed Income for the 21st Century,” that would guarantee a $12,500 annual income for every adult and a $4,500 allowance for every child. It’s what wonks call a “negative income tax” plan — unlike a universal basic income, it phases out as households rise into the middle class.

The team estimates that its proposal would eliminate poverty while costing $876 billion annually.

To give a sense of scale, total federal spending in 2019 was about $4.4 trillion, with $1 trillion of that financing Social Security payments and $1.1 trillion supporting Medicaid, Medicare, the Affordable Care Act and the Children’s Health Insurance Program. As Paul Campos says:

A simple annual wealth tax on the incremental gain in wealth of obscenely rich Americans would by itself pay for somewhere between a third and half of the cost of eliminating poverty in this country, via straightforward wealth redistribution.

So why don’t we get rid of poverty by giving people without money, money? Because we haven’t adjusted psychologically and politically to the fact that the developed economies produce so much wealth that getting rid of poverty could be a minor problem of distribution, one that merely requires a social commitment to doing it.

Instead, we tell the people at the bottom of wage distribution: “This is America. If you don’t like being poor, you can always do something about it, like not being poor.” And many of us go back to eating our dollar menu cheeseburgers and thinking to ourselves “I don’t know anybody *that* poor”.

Except that if you think about it, you know plenty of people who ARE that poor. And apparently, many of us want to keep it that way, just in case we end up rich someday.

America’s $21 trillion American economy has been captured by its oligarchs and their political servants who say we can’t eliminate poverty because that would be socialism, and socialism makes the baby Jesus cry.

So, 50 million Americans continue to wake up dirt poor every day.

We have reached an impasse – actually be have been there all along, but the crisis is deeper. So we have a large area populated by an indoctrinated mass of folks who think taxes are theft, that rich folks are job creators and that any effort to help others is socialism.

For many of the rest of us, we see taxes as necessary, and the consumer economy as a job creator – and we have always tried to make life better at least on some level.

The first group has all the power now and it seems like it will only get worse.

No recommendations except that I get tired of hearing pols from boob-land complain about us godless city folks while in the end their states desperately need our money.

The Wrongologist has this one dead right. If there are readers who think otherwise, I would love to hear from them how they think his data is incomplete or his analysis is faulty. This challenge is not intended as an invitation to pugilism, but a real interest in correcting me and Wrongo in our possibly inadequate reasoning.