With all of the false equivalency about secret documents that mysteriously travel outside their protected locations, you can be forgiven for not hearing about the antics in Missouri’s state legislature. From the WaPo:

The state’s House-approved bill requires women’s arms to be concealed. Missouri wouldn’t force its citizens to wear masks during Covid – even with lives at risk. But Missouri is forcing women to wear long sleeves instead of going sleeveless, something that endangers no one.

Imagine if Rep. Jim Jordan (R-OH) was instead a member of the Missouri House. He would finally have to roll his sleeves down and put on a jacket.

Republican legislators need to become enraged to go to work — not perturbed, not irritated, not annoyed, but furious — and it’s always a made-up crisis and always someone else’s fault, most likely a Democrat’s. Take your pick: Drag queen story hour. Pedophiles in pizza parlors. Genderless potato head toys. Migrant caravans. M&M’s in a lesbian relationship. Trans takeover of sports and bathrooms. Critical Race Theory. Antifa mobs dressing up like MAGAs and attacking the Capitol. Jewish space lasers starting forest fires. Dems are coming for your gas stoves. And so, so many more. On to cartoons. 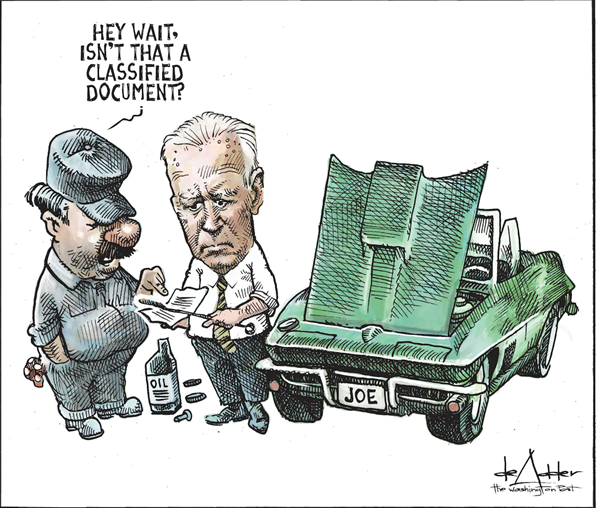 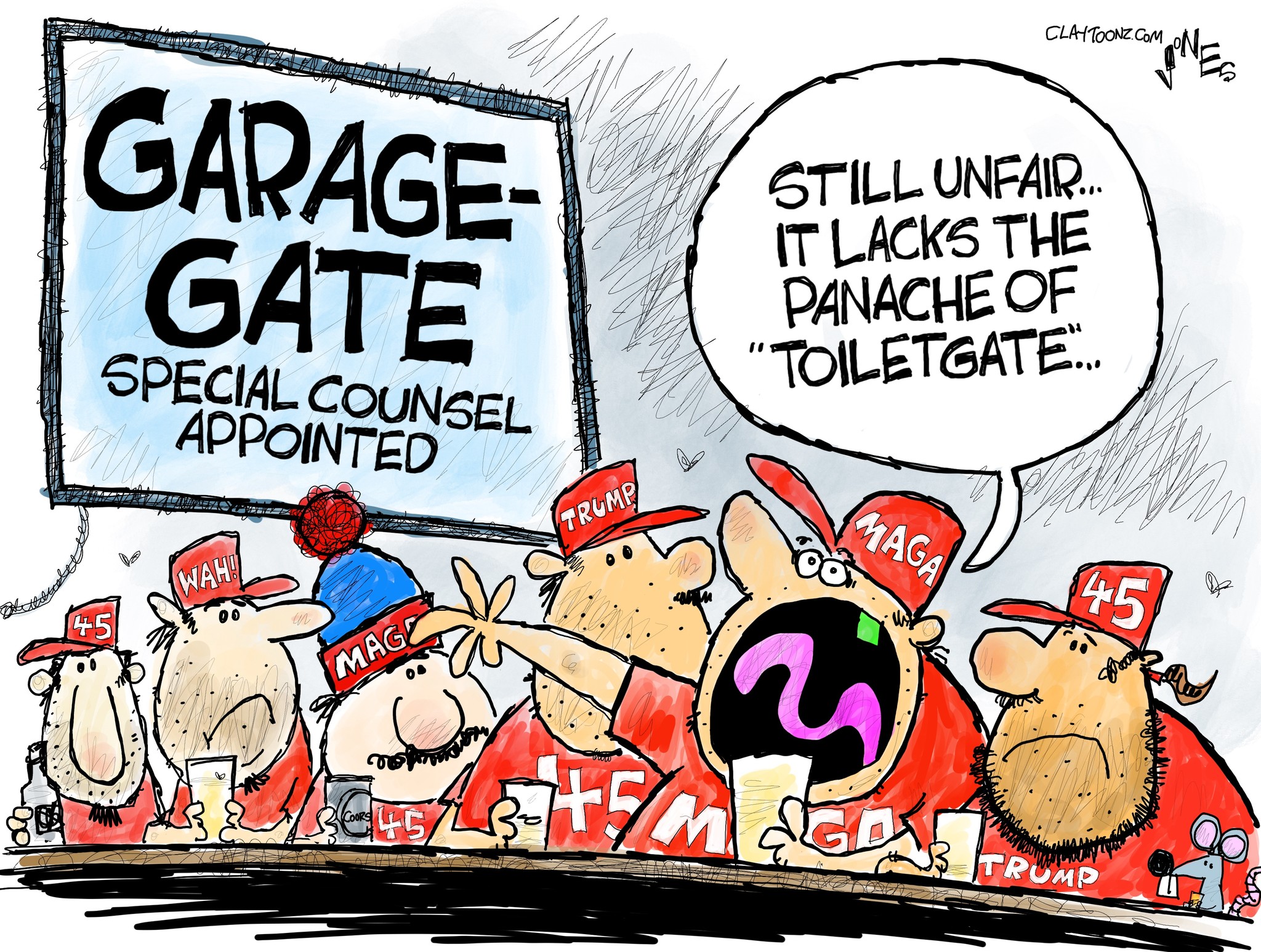 Didn’t we seen this before? 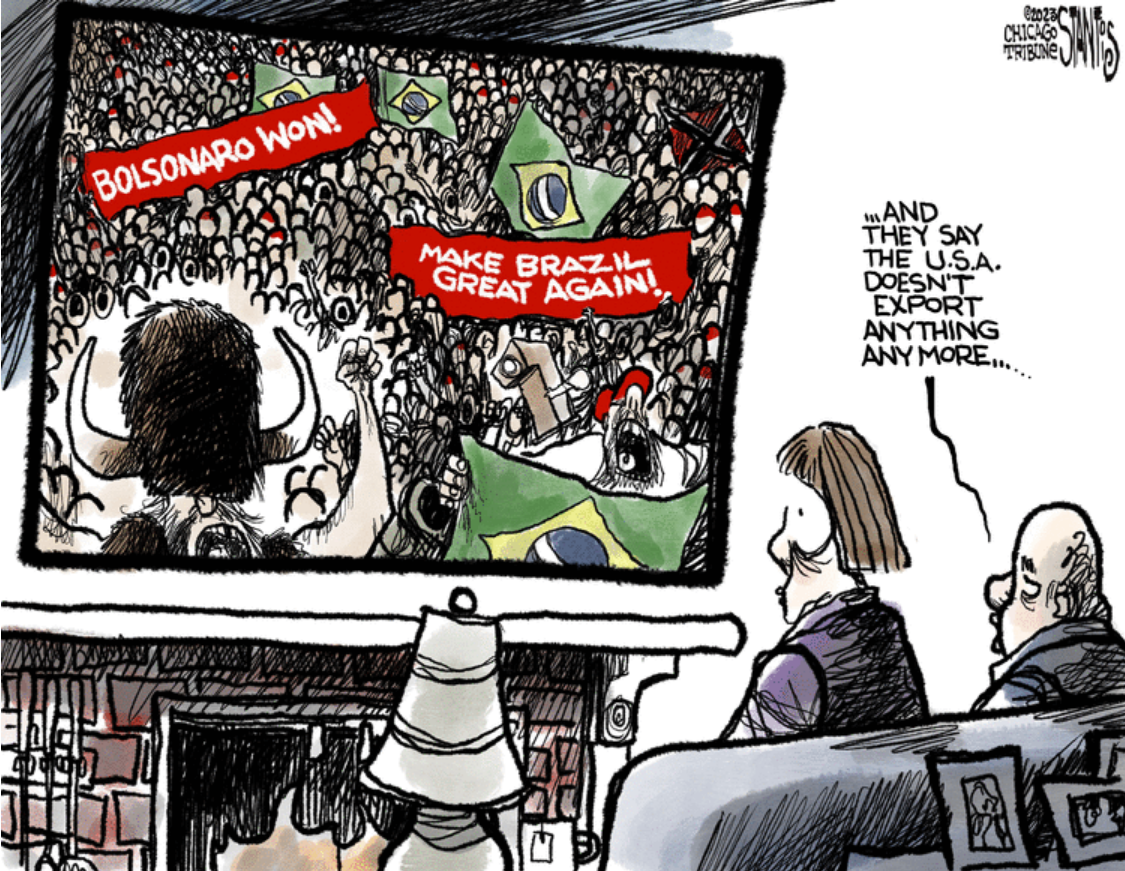 And Trump’s crowds were bigger: 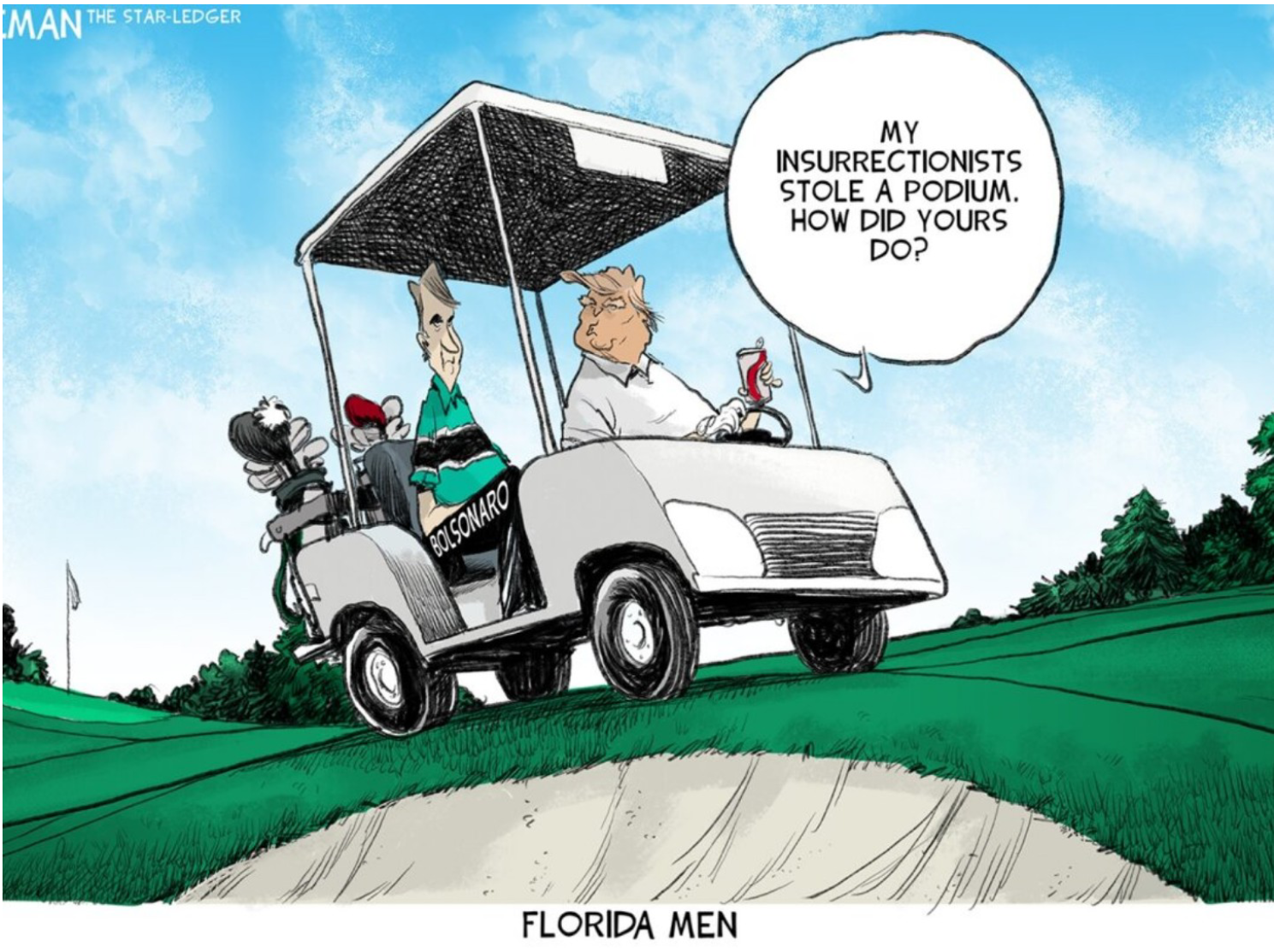 Santos, if that’s really your name, we have a job for you: 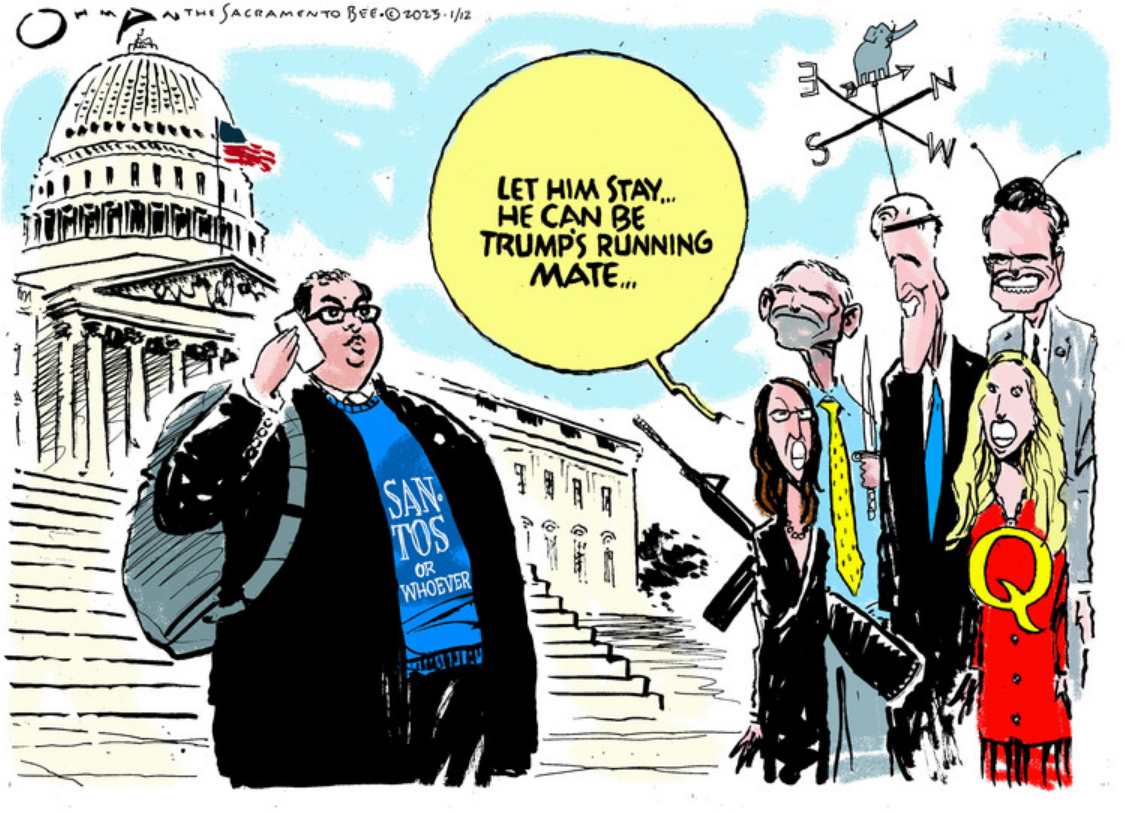 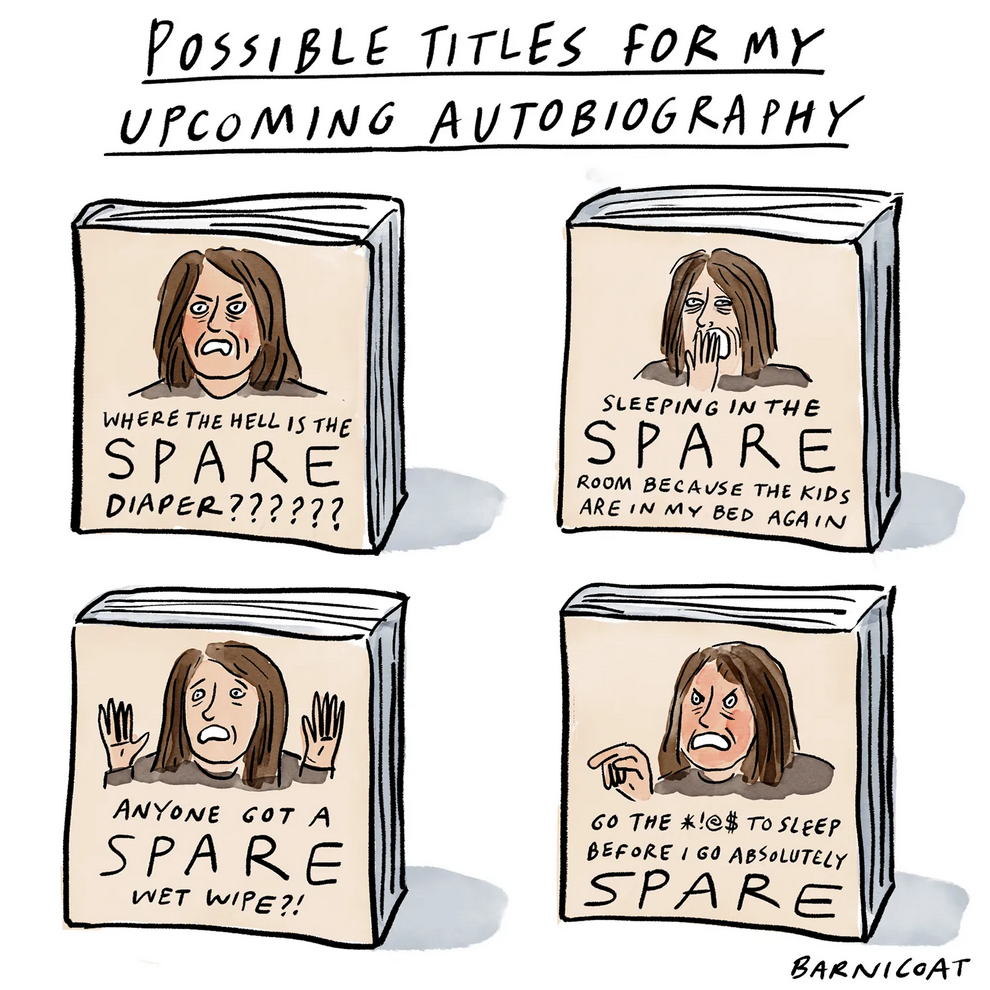 It takes courage to speak about things that we’re traumatized into not speaking about. What surprises Wrongo most about this is the lack of empathy or understanding he sees by Americans toward Harry as a young boy who, as a 12 year-old had to perform as an adult at his mother’s funeral.

Now he is an adult, a husband and father. So many people in the US have scorn for him. Why does he have to dump all of this on us? Why doesn’t he simply get on with his life rather than telling this story over and over on Oprah, 60 Minutes, and in his book?

Wrongo has watched the Netflix documentary. He will not read the book. But it’s evident that Harry’s rage, and his grief, remain. He’s still trying to make sense of what happened to him after his mother died. While his Royal family may have moved on, he hasn’t.

Worse yet, he’s a male. Western society isn’t tolerant of males who show vulnerability or confusion as an adult. Worse, his own family’s expectations are to simply soldier on.

America likes big stories of family dysfunction, and we sure have a good one in the long-lived soap opera called the British Royals.

Harry deserves closure and happiness. He stood up for his wife and kids. His birth “family” treated him horribly. He’s written his book, and he may make a ton of money off it. Why should any of that make Americans angry?

You are spot on about Harry! The monarchy is a well oiled machine that feeds slime to the tabloids when it suits them. It’s time for someone from within to reveal that truth, especially when it drove him away from family, trashed his wife and put them both at safety risk. Like you, I watched the doc but will skip the book, and I hope they make a fortune from it all. It’s time to stop being so enchanted by the British firm.